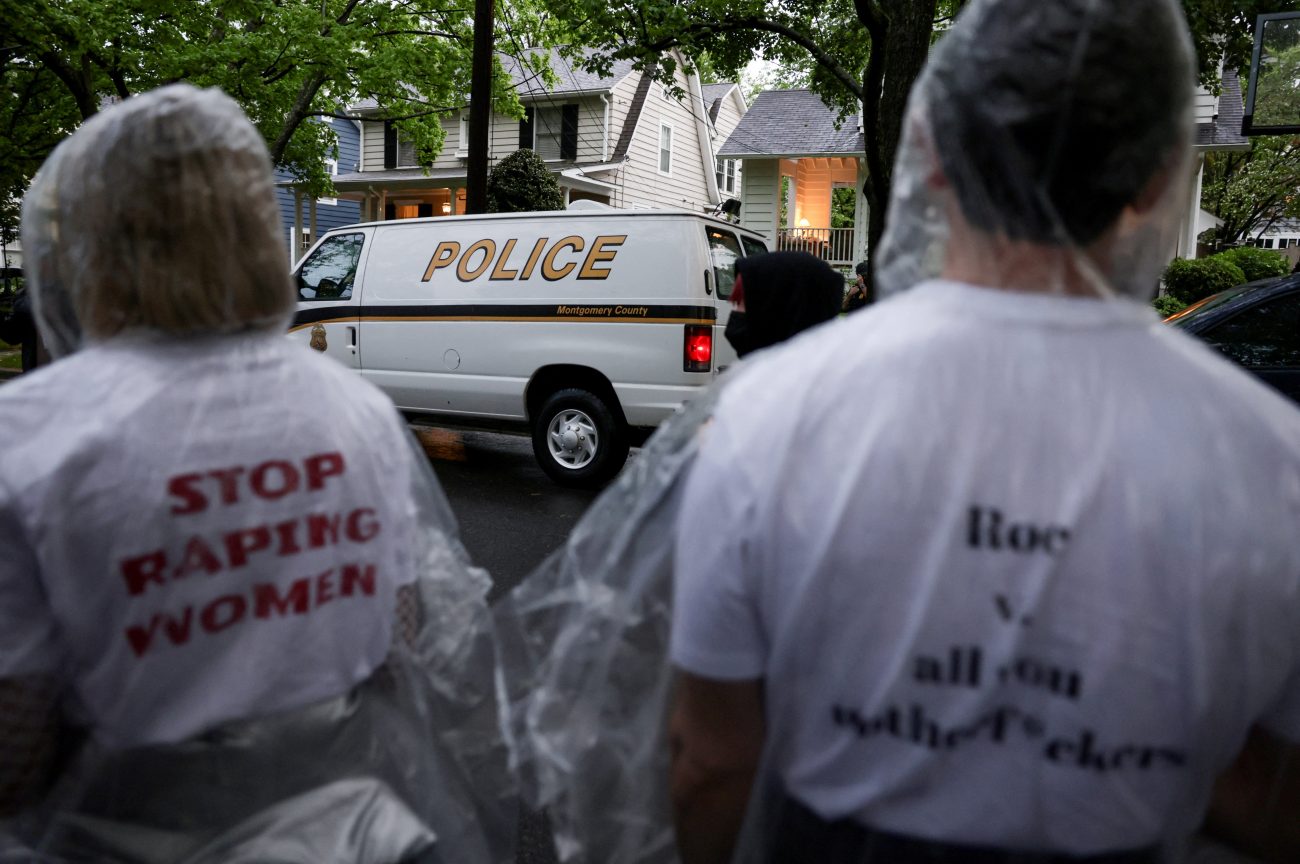 Abortion demonstrators protest outside of Supreme Court Justice Brett Kavanaugh's home in Chevy Chase, Md., May 7, 2022. A federal grand jury June 15 indicted Nicholas John Roske on a single count of attempted murder for planning to kill Kavanaugh. He was was carrying a gun, a knife and zip ties when he was arrested June 8 near the justice's home. (CNS photo/Evelyn Hockstein, Reuters)

WASHINGTON (CNS) — The Biden administration’s “relative silence” over a growing number of attacks on churches, pregnancy resource centers and pro-life organizations over the abortion issue “endangers Americans even more,” said a coalition of pro-life and faith leaders.

In a letter released June 16, the leaders called on the U.S. Department of Justice to publicly condemn the attacks, “commit to vigorous efforts to prevent them, and to investigate and prosecute them.”

The pro-life leaders acknowledged the FBI was “assisting at least one affected religious organization on this matter” and they said they were aware “through media reports” the agency was “at least investigating the firebombing” of a pro-life center in Madison, Wisconsin.

“However, the severity of the situation calls for your leadership,” they wrote Garland and Clarke. “This continued assault on religious and pro-life groups because of their beliefs is a manifest injustice that requires prompt, comprehensive and public response.”

They urged the Justice Department “to proactively engage with the affected faith communities to ensure their concerns and security needs are being met,” and they requested a meeting with Garland’s office as well as the department’s Civil Rights Division “to discuss what plans are in the likelihood these attacks will intensify.”

A day before the pro-life coalition released its letter, more than 100 House Republicans sent a similar letter to Garland, calling on the Justice Department to investigate these incidents “as acts of domestic terrorism.”

In a response to the lawmakers’ letter, the FBI issued a statement to news outlets June 16 saying the agency is investigating “a series of attacks and threats targeting pregnancy resource centers and faith-based organizations across the country.”

“The FBI takes all threats seriously and we continue to work closely with our law enforcement partners and will remain vigilant to protect our communities,” a spokesperson for the FBI’s national press office told the Washington Examiner.

The coalition of pro-life leaders who wrote to Garland and Clarke was organized by CatholicVote, a political advocacy group.

Among the letter’s signatories were Greg Schleppenbach, associate director of the U.S. Conference of Catholic Bishops’ Secretariat for Pro-Life Activities; Jeanne Mancini, president of the March for Life Education and Defense Fund; Kristan Hawkins, president of Students for Life Action; and Marjorie Dannenfelser, president of Susan B. Anthony Pro-Life America.

Citing a tally by the U.S. Conference of Catholic Bishops’ Committee for Religious Liberty, their letter noted that from May 2020 to October 2021, there were at least 100 incidents of arson, vandalism and other destruction at Catholic sites across the United States.

“In December of last year, the Department of Justice was asked how it was investigating the repeated attacks on churches in the United States,” the letter said. “The attorney general was also asked to investigate those complaints and take appropriate action as is your duty. Since that request there has been public silence.”

The pace of attacks has been stepped up to include pro-life centers as targets, it noted, since the May 2 publication of a leaked draft version of Supreme Court Justice Samuel Alito’s opinion in the Dobbs v. Jackson Women’s Health Services case.

The draft suggested the Supreme Court could overturn Roe v. Wade, the court’s 1973 decision which legalized abortion nationwide, in its ruling in the Dobbs case concerning a Mississippi ban on most abortions after six weeks.

The final ruling has not yet been handed down, but one group in particular has declared “open season” on pro-life pregnancy centers: Jane’s Revenge, described as a “radical pro-abortion” organization.

On June 13, the chairmen of the U.S. bishops’ religious liberty and pro-life committees pleaded for an end to attacks on pro-life centers and churches.

In their June 16 letter, the coalition of pro-life leaders highlighted some of these recent attacks.

Like the Wisconsin pro-life center, a Keizer, Oregon, pro-life center has been firebombed “as well as a pregnancy care center in Buffalo, New York,” they said. “Seventeen churches or pro-life organizations have been vandalized with pro-abortion or anti-religious slogans.”

“Among those, a tiny Black Baptist church in rural Mississippi was spray-painted with depictions of rape, and four churches in Olympia, Washington, were vandalized on the same day with phrases like ‘abort the church,'” it continued. “A recurring slogan has been: ‘If abortions aren’t safe, then neither are you.'”

“Religious liberty is a foundational principle of enduring importance in America, enshrined in our Constitution and other sources of federal law,” the letter continued. “It is a precondition of a flourishing civil society where citizens of shared beliefs or convictions freely come together to meet their communities’ needs, as through the efforts of pregnancy help centers to support expecting moms.

“And it has no more basic embodiment than the right to worship free from fear.”

It added: “One extremist group is advocating for violence in response to the final Supreme Court decision on Dobbs, while another group has published home addresses, and encouraged people to show up at Supreme Court justices’ homes, churches and their children’s schools in an attempt to coerce the justices and influence their final decision.”

On June 8, Maryland police arrested Nicholas John Roske, a 26-year-old from California, near the justice’s Maryland home in Chevy Chase, Maryland. He was carrying a gun, a knife and zip ties. Roske called 911 to turn himself and told police he planned to break into Kavanaugh’s house and kill him and then planned to kill himself.

On June 15 a federal grand jury indicted him on was charged in a single count of attempted murder a justice of the United States.

The measure was passed unanimously by the Senate in May but was held up by House Democrats who wanted the measure to also include protection for court employees’ families.

On May 9, then-White House Press Secretary Jen Psaki tweeted that President Joe Biden “strongly believes in the constitutional right to protest. But that should never include violence, threats, or vandalism. Judges perform an incredibly important function in our society, and they must be able to do their jobs without concern for their personal safety.”

NEXT: Diocese takes first step toward possible cause for former FOCUS missionary