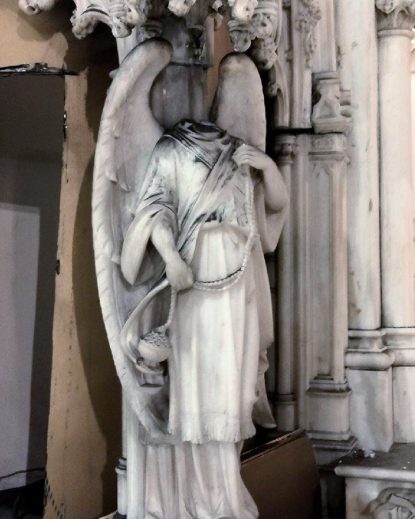 A decapitated angel statue is seen May 31, 2022, at the altar at St. Augustine Catholic Church in Brooklyn, N.Y. It is one of two angels that guarded the church’s the solid gold and jeweled tabernacle stolen by burglars who used who used power tools to cut through a metal protective casing holding the tabernacle sometime May 27 and was discovered by the pastor May 28, according to Brooklyn diocesan officials. (CNS photo/courtesy DeSales Media Group)

“Each of us must choose the path of peace and open our hearts to the love that God has for his children,” said a joint statement June 13 by the two prelates. “O Sacred Heart of Jesus, touch our hearts and make them like your own.”

They made the comments as committee chairs of the U.S. Conference of catholic Bishops. Cardinal Dolan chairs the Committee on Religious Liberty and Archbishop William E. Lori of Baltimore is chairman of the bishops’ Committee on Pro-Life Activities.

The two prelates noted the pace of attacks had stepped up since a draft version of Supreme Court Justice Samuel Alito’s opinion in the case Dobbs v. Jackson Women’s Health Services was leaked in May. The final ruling has yet to be released.

The leaked draft suggested the Supreme Court could overturn Roe v. Wade, the court’s 1973 decision which legalized abortion nationwide, in its highly anticipated ruling in an abortion case from Mississippi that bans most abortions after six weeks.

Since then, Cardinal Dolan and Archbishop Lori said “charities that support pregnant mothers in need have been firebombed, and pro-life organizations have been attacked almost daily and terrorized.”

“And even the lives of Supreme Court justices have been directly threatened,” they said, referring to the June 8 arrest of a man outside Justice Brett Kavanaugh’s home in Chevy Chase, Maryland, a Washington suburb. The man, police said, had planned to kill Kavanaugh but ultimately decided against it.

He was identified as Nicholas John Roske, a 26-year-old from California, who was carrying a gun, a knife and zip ties. Roske was arrested after he called 911 to turn himself in. He told police he planned to break into Kavanaugh’s house and kill him and then planned to kill himself. He has been charged with attempted murder.

“For two years now, Catholic churches have been attacked and vandalized at an alarming rate. In July of 2020, we strained to understand this violence,” Cardinal Dolan and Archbishop Lori noted in their statement. The U.S. bishops, in May 2020, started tracking violence directed against Catholic churches. The number of such attacks hit the 100 mark last October.

In May of this year, a pro-life pregnancy center in Madison, Wisconsin, was set afire. A group calling itself Jane’s Revenge took credit for the act. In early June, a second such center in Buffalo, New York, was subject to an overnight attack. Scrawled with spray paint on the center’s outside wall was “Jane was here.” However, no group has claimed responsibility.

“We urge our elected officials to take a strong stand against this violence, and our law enforcement authorities to increase their vigilance in protecting those who are in increased danger,” Cardinal Dolan and Archbishop Lori said. “We thank those who have already done so, and we encourage them to continue.” 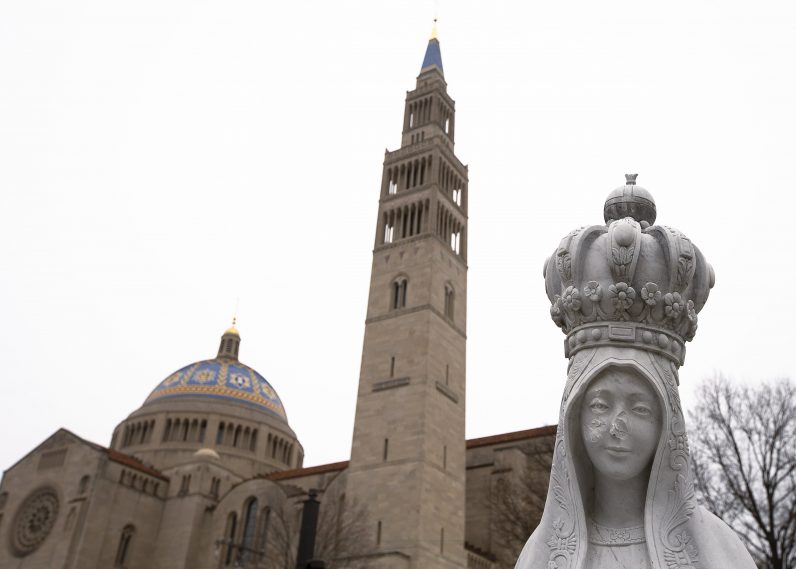 A vandalized statue of Our Lady of Fatima near the Basilica of the National Shrine of the Immaculate Conception in Washington is seen Dec. 8, 2021. The statue’s nose and hands were cut off and the cross on her crown was broken off. Shrine officials said that around 10:45 p.m. Dec. 5, the perpetrator got to the statue by climbing a locked fence that surrounds a rosary walk and garden that includes the statue. (CNS photo/Tyler Orsburn)

NEXT: Dominican sister working on new translation of Book of Revelation