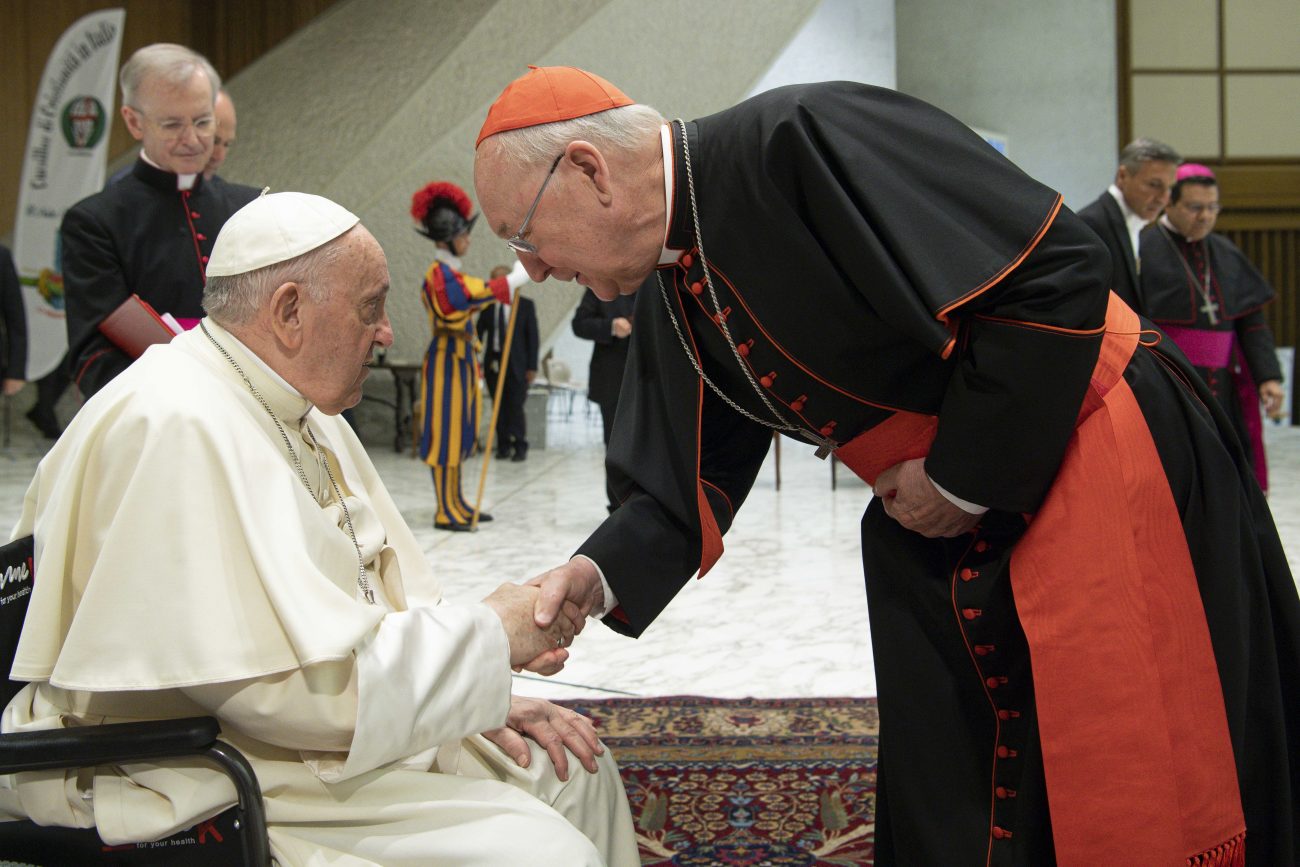 Pope Francis greets Cardinal Kevin J. Farrell, prefect of the Dicastery for Laity, the Family and Life, during an audience with Italian members of the Cursillo movement at the Vatican in this May 28, 2022, file photo. Cardinal Farrell has been appointed to head the Vatican's new Investment Committee. (CNS photo/Vatican Media)

The committee, which was established by Pope Francis in his apostolic constitution reforming the Roman Curia, will be comprised of four experts in the field of financial investments from around the world, the June 7 announcement said.

According to the constitution, “Praedicate Evangelium” (“Preach the Gospel”), the Investment Committee is responsible for “ensuring the ethical nature of the Holy See’s movable investments according to the social doctrine of the church and, at the same time, their profitability, adequacy and risk.”

The committee members, the constitution states, are appointed for a five-year term.

In other Vatican-related financial news, the Institute for the Works of Religion, commonly known as the Vatican bank, published its annual financial report, which showed a net profit of 18.1 million euros ($19.3 million) in 2021.

While significantly less than its net profit of 36.4 million euros ($44.1 million) in 2020, the Vatican bank said in a June 5 press release that profits for 2021 were “in line with expectations” after a “hold to collect and sell” business model was “adopted for investments and with a conservative risk profile.”

“Growth in assets under management reflects positively on the investment performance delivered to clients with respect the principles of the social doctrine of the church,” the statement said, adding that “70% of management lines performances were above the 5-year benchmark.”

Cardinal Santos Abril Castelló, president of the Commission of Cardinals supervising the bank, said the net profit for 2021 was “certainly an important result considering the low yields on financial markets.”

“The wise and prudent choices made by management continue to pay off,” he wrote.

Jean-Baptiste de Franssu, president of the bank’s board of supervisors, echoed the cardinal’s sentiments and said the 2021 net profit “reflected the prudent approach in the management of the institute’s assets and cost base adopted over the years.”

However, de Franssu said, “the invasion of Ukraine by Russia” not only will have “lasting consequences on the world order,” but will also have “a deep impact on people and the economy.”

“This crisis certainly adds to the strain created by more than two years of the pandemic,” he wrote. “Financial markets and banking activities will certainly be impacted in the long term.”

According to the 138-page report published online June 7, the Vatican bank strengthened and developed “the quality and standards of its asset management investment process in order to further improve the results of client’s investments.”

The institute handled more than 5.2 billion euros ($5.5 billion) in total client assets and registered 14,519 clients, who continue to be rigorously vetted and must be Vatican employees or retirees or diplomats accredited to the Holy See. Bishops’ conferences, dioceses, religious orders and other official Catholic works also may have accounts.

The 2021 financial statements were audited by the firm Mazars Group and were reviewed by the Commission of Cardinals overseeing the institute’s work.

NEXT: Families, women religious in Poland open their lives to Ukrainian refugees