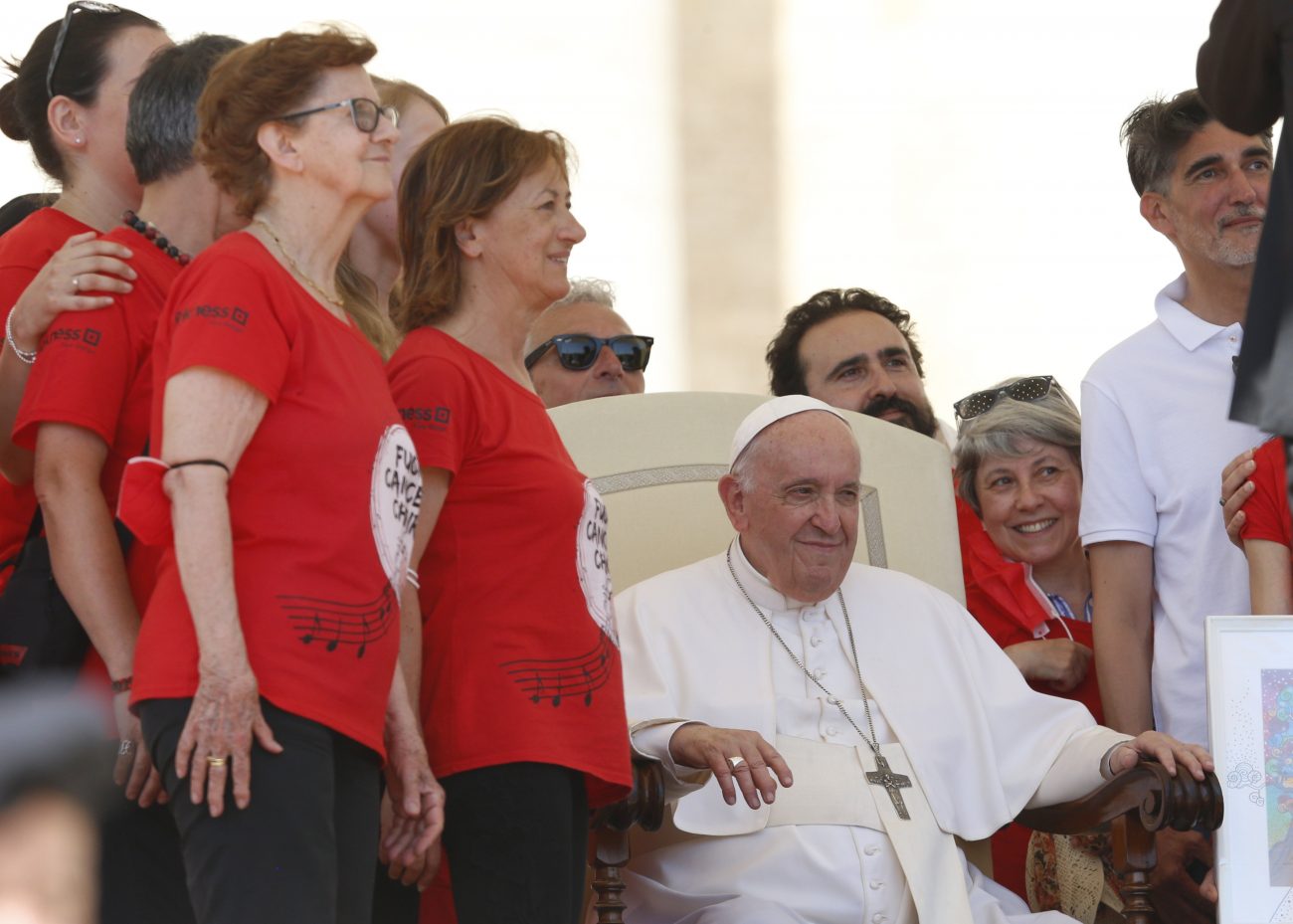 SENSITIVE MATERIAL. THIS IMAGE OR CAPTION MAY OFFEND OR DISTURB. Pope Francis meets members of the Fuck Cancer Choir from Italy during his general audience in St. Peter's Square at the Vatican June 8, 2022. (CNS photo/Paul Haring)

VATICAN CITY (CNS) — Why are the elderly unappreciated and seen as useless when they carry so much wisdom about life and can open the door to God’s tenderness, Pope Francis asked.

Criticizing the obsession of trying to stay forever young in appearance, he said people must not hide or try to get rid of their wrinkles.

“Wrinkles are a sign of experience, a sign of life, a sign of maturity, a sign of having made a journey. Do not touch them to become young, that your face might look young,” the pope said June 8 at his weekly general audience in St. Peter’s Square.

“What matters is the entire personality; it’s the heart that matters, and the heart remains with that youth of a good wine — the more it ages the better it is,” he said to applause.

The pope continued his series of talks about old age by looking at St. John’s account of Nicodemus (Jn 3:1-21). Jesus tries to explain to the elderly Pharisee about the need to be born again.

Jesus says that to see the kingdom of God, one needs to be “born from above,” which means “a rebirth from above with the grace of God” and not to be “reborn physically” as if this life had been a waste of time or a “failed experiment” that needed to be erased and done over, the pope said.

“This life is precious in God’s eyes — it identifies us as beings who are loved tenderly by God,” the pope said.

Jesus’ encounter with Nicodemus has something to teach people today, who, like Nicodemus, misunderstand what “rebirth” is and should be in the light of faith, he said.

Today, he said, there is a “dream of an eternal youth” and a “myth that makes us want to return to our mother’s womb to come back always with a young body.”

The world, which shows “a worrisome tendency to consider the birth of a child as the simple matter of the production and biological reproduction of the human being,” also cultivates this “myth of eternal youth as the desperate obsession with an incorruptible body,” he said.

Technology has stepped in to help so that, while people await “the defeat of death, we can keep the body alive with medicine and cosmetics which slow down, hide, erase old age,” he added. “So much makeup, so many surgical interventions to appear young.”

“Feeding the myth of eternal youth” should not be confused with the laudable effort of staying healthy and promoting one’s well-being, he said.

The pope quoted the Italian actress, Anna Magnani, who said, “Please don’t retouch my wrinkles. It took me so long to earn them.”

There is a mission proper to old age, he said, which is to help show people the hope and love that come with “being destined for eternity in God” and journeying toward one’s final destination with the wisdom of lived experience.

Being old is not an obstacle “to the being born from above that Jesus speaks of, but it becomes the opportune time to illuminate it” and make it credible to others, the pope said.

The kind of tenderness grandparents show their grandchildren “opens the door toward understanding God’s tenderness,” he said, “and old age helps us understand this aspect of God who is tenderness.”

He said people should question why “this throwaway culture decided to throw out the elderly, considering them useless.”

NEXT: A look at the 21 new cardinals appointed by Pope Francis