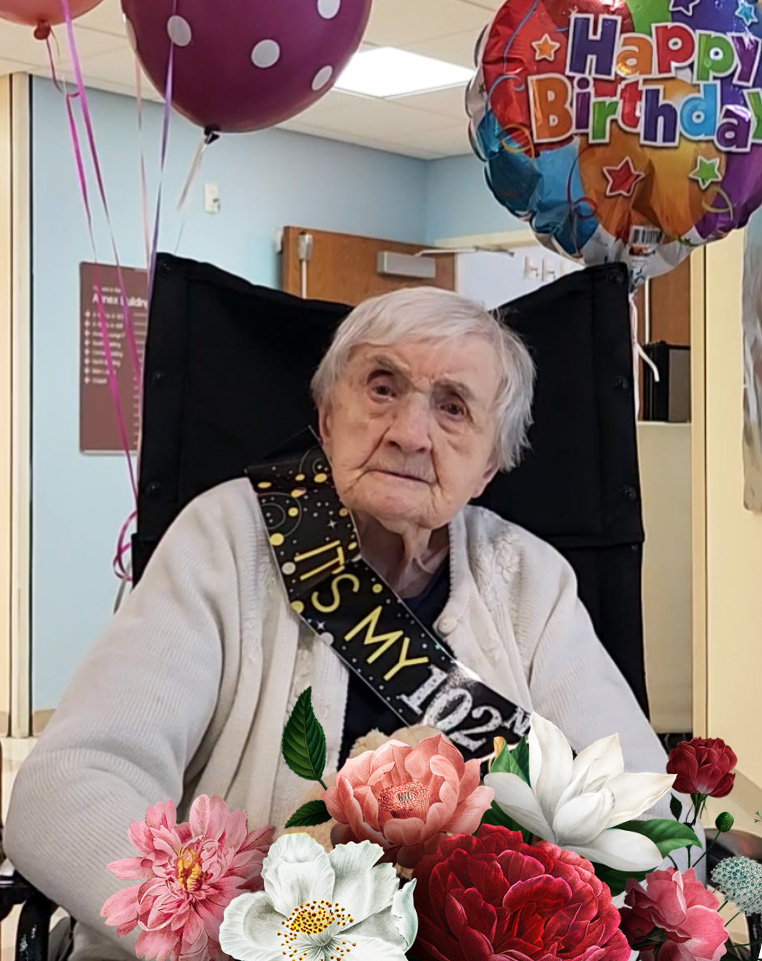 A religious sister in Delaware County celebrated her 102nd birthday today at her community’s retirement home in Aston.

Balloons and cake greeted Sister of St. Francis of Philadelphia Anthony Eileen Reidy at Assisi House as she marked her special day.

Born Margaret Reidy in County Limerick, Ireland, she entered the convent as Sister Anthony Eileen in 1939 and professed her first vows in 1945.

Reflecting on her vocation at her 70th jubilee, she recalled her first encounter with the sisters at an informational talk in her hometown.

“I attended the meeting and though I didn’t know the Sisters of St. Francis, I was very impressed by their kind, gentle approach and to hear them explain that they serve everybody — not just one group of people,” Sister Eileen wrote.

Since its earliest days under the leadership of German immigrant Maria Anna Boll Bachman — invested by then-Bishop John Neumann himself and later known as “Mother Francis” — the congregation has dedicated itself to the care of the poor and the vulnerable, with a particular focus on women, children and marginalized populations.

Currently the sisters are active in 15 states throughout the U.S., and in Ireland and Africa. Through prayer, education, outreach, spiritual and pastoral care, advocacy and leadership, the congregation serves a range of groups, including the elderly, the impoverished, immigrants, refugees, and persons with AIDS.

Impressed by the presentation, the future Sister Anthony Eileen and several other young women from the area decided to join the congregation.

“We had lots of fun together even though we worked hard and learned much in how to become a Sister of St. Francis,” she said.

Sister Eileen’s ministry has been an extensive one that has spanned her native Ireland as well as New Jersey, Massachusetts and the Philadelphia region.

She served for 35 years in the Diocese of Trenton at St. Francis Hospital and Medical Center, where she counseled amid shifts in hospital cafeterias.

“Many of the young nursing students would confide in me because I was as young as they were and they found a friend in me,” she said. “In fact, some have remained friends for many of my 70 plus years.”

Her ministry continues at Assisi House, where she has lived since 2010. Along with her daily prayer and service projects, Sister Anthony Eileen enjoys watching movies and listening to music.

Asked what being a Sister of St. Francis of Philadelphia has meant to her, she wrote, “I feel it is a spiritual community — stable and caring. After leaving my family in Ireland and coming to America, I was able to shape my life and live out my hopes and dreams while strengthening my prayer life. I thank God for his goodness to me in helping me find this wonderful congregation.”

NEXT: ‘A dollar a day’ key to Catholic Charities Appeal, says new board president