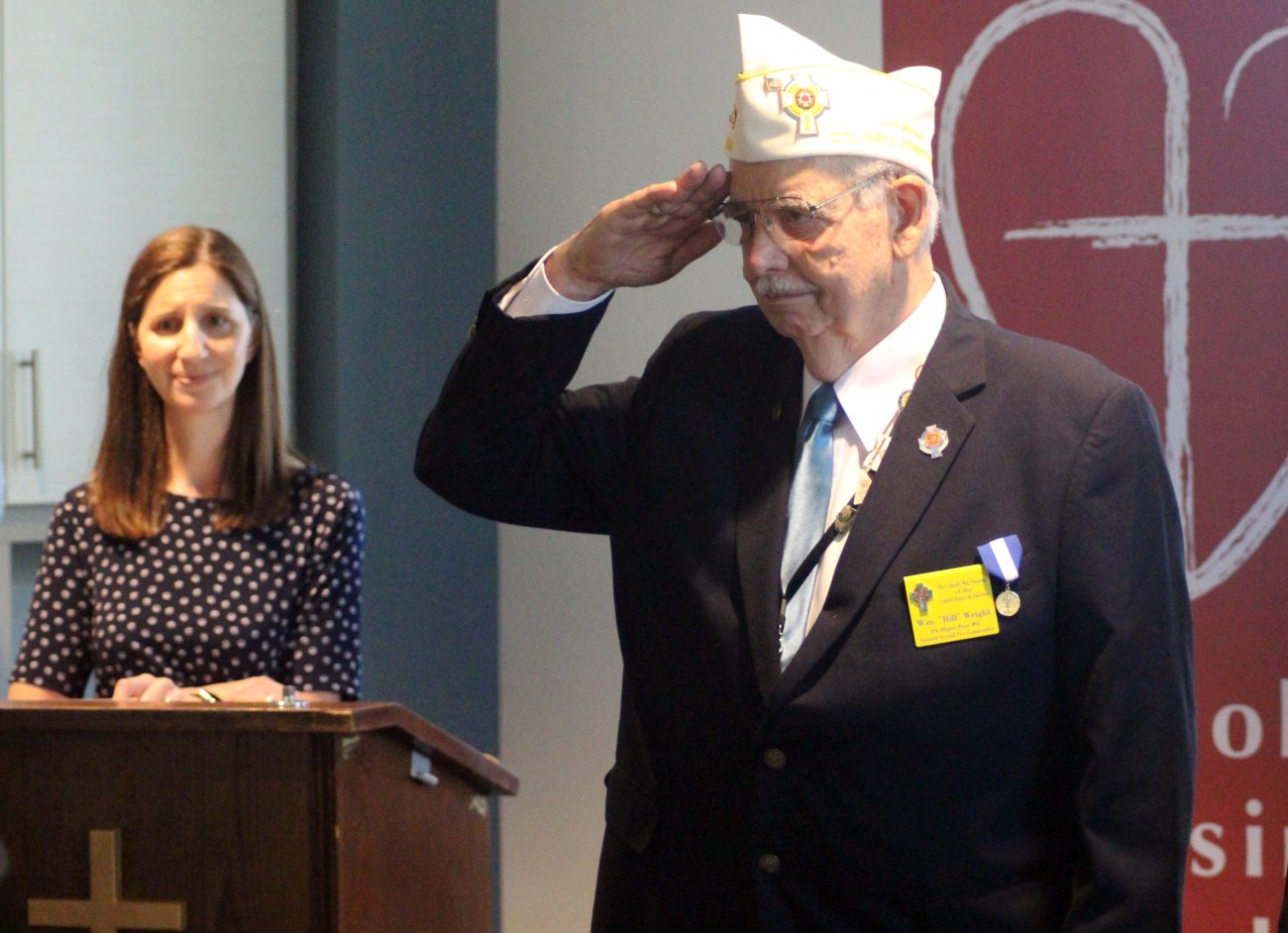 Marine veteran Bill Wright, a member of the Catholic War Veterans, salutes some dozen men who served in the U.S. armed forces during the Vietnam War era at a June 29 commemoration hosted by archdiocesan Catholic Housing and Community Services at its senior living site in South Philadelphia. CHCS director Heather Huot (left) said the event showed it was "never too late" to honor the veterans. (Gina Christian)

An archdiocesan senior housing agency, U.S. Senator Pat Toomey and a Catholic veterans group recently teamed up to honor more than a dozen veterans from the Vietnam War era.

Robert DeSousa, Senator Toomey’s state director and a retired colonel in the Pennsylvania Army National Guard, presented some 15 veterans with a Congressionally authorized commemorative pin marking the 50th anniversary of the end of the Vietnam War.

Featuring an eagle framed by laurel leaves, stripes and six stars – representing the U.S and its five wartime allies — the pin was embossed on the back with a simple message: “A Grateful Nation Thanks and Honors You.”

The acknowledgement was long overdue, said DeSousa, who was joined at the event by fellow members of the Catholic War Veterans and Auxiliary of the U.S.A., a national service organization founded in 1935 by Msgr. Edward Higgins in Astoria, New York.

American opinion was bitterly divided on the Vietnam War, which pitted a communist North against a Western-facing South, and as a result, “many … did not get the thanks they deserved when they came home,” said DeSousa. “The bottom line is that regardless of whether one agrees with the policies of this or any other war, the men and women who raised their hands to take an oath were simply doing their duty and need to be recognized.”

That task is shared by the Catholic War Veterans, he said, since “people’s faith and their (military) service) often go hand in hand.” 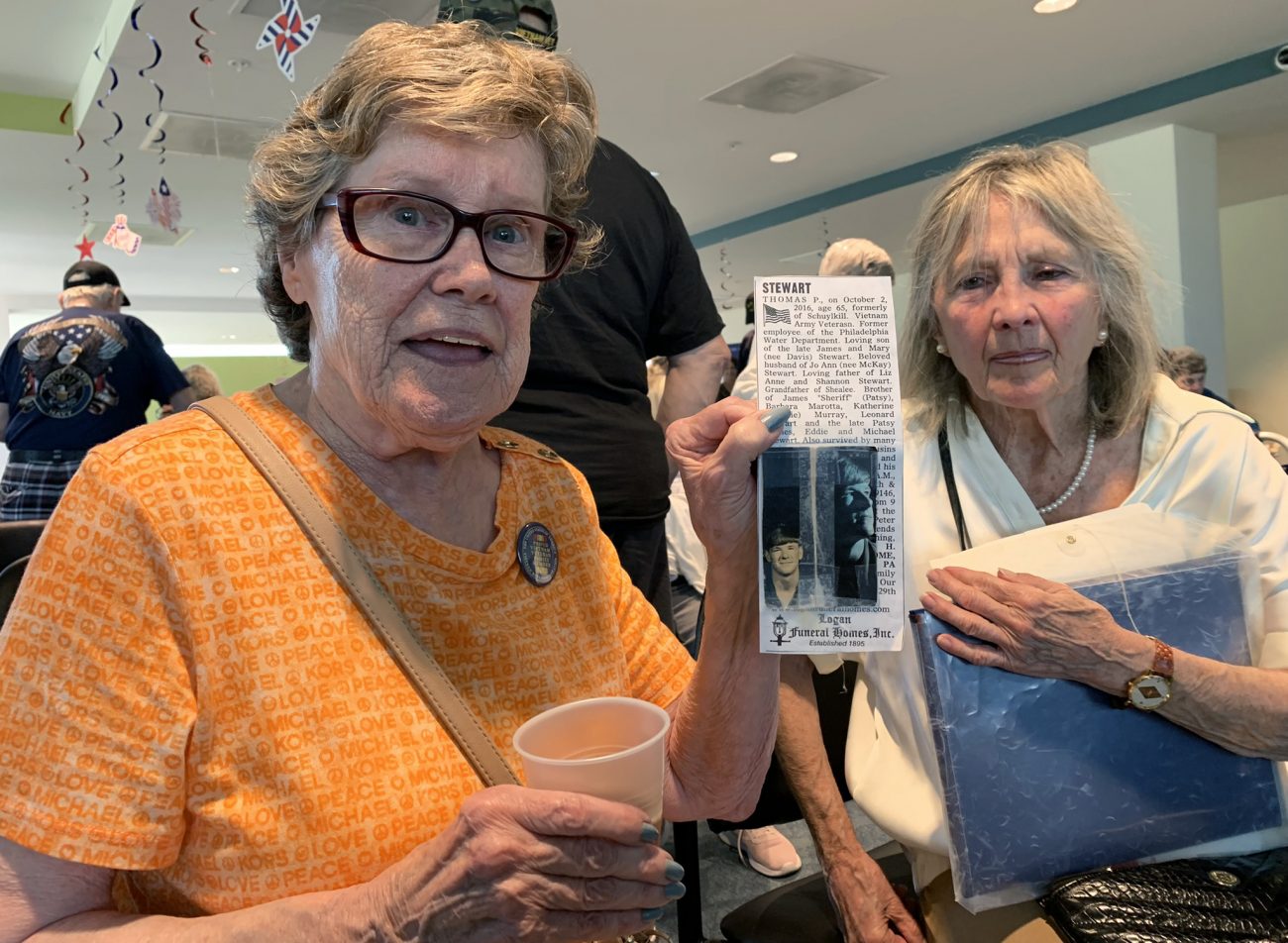 Barbara Anne Marotta (left) and Rosemary Chiliberti accepted the commemorative veteran pins for their late loved ones during the June 29 ceremony. (Gina Christian)

“In our senior housing, we have the opportunity to accompany these older adults for one little part of their lives,” she said. “But we need to remember that they had so many years before then, and many of them have done extraordinary things. So to be able to have this event today is quite an honor for us.”

For some, the occasion was exceptionally bittersweet.

Rosemary Chiliberti, a parishioner at St. Richard in South Philadelphia, accepted a pin on behalf of her late husband Joseph, who was laid to rest last month at Washington Crossing National Cemetery in Newtown.

“He was a cook in the Army, and he said everybody loved his food,” said Chiliberti. “He came from South Philadelphia, so they knew it was good.”

Although he would have been glad to receive the honor, her husband “never talked about the war,” she said. “I hardly knew about it … how he felt, was he afraid, did he hear the bombs? But I didn’t want to remind him of something maybe he wanted to forget.”

At the same time, she said, he would have been delighted to receive the pin.