Summer mission appeals more vital than ever to spread the Gospel 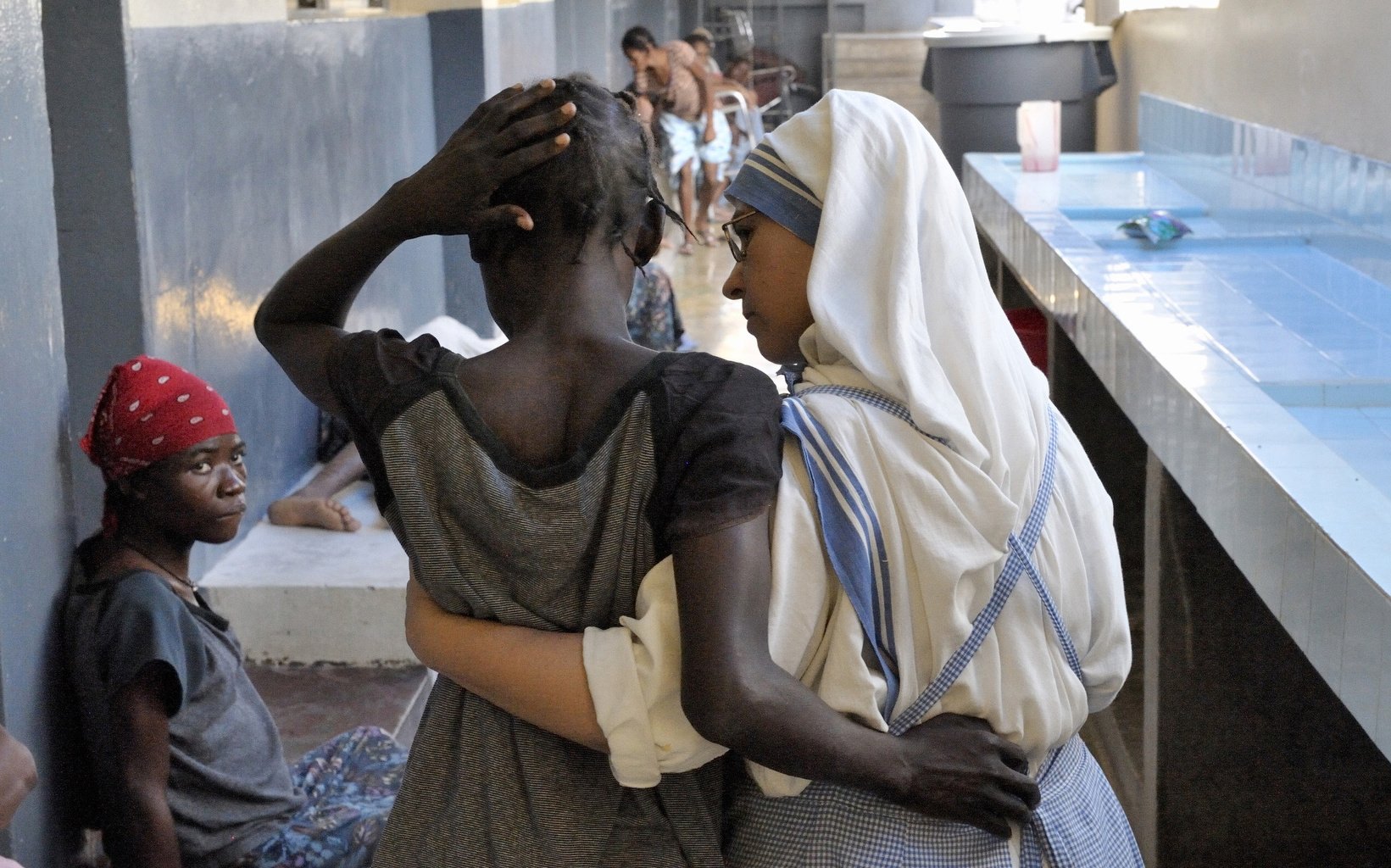 Spanish Missionary of Charity Sister Paul supports a patient at the House for the Dying in Port-au-Prince, Haiti, in this Oct. 16, 2009, file photo. The need for prayerful and practical support of missionaries continues to grow, said Michele Meiers, assistant director of the archdiocesan Pontifical Missionary Societies office. (CNS photo/Paul Jeffrey)

Summer travel usually means “vacation” – but for missionaries, it’s about vocation, and the chance to raise awareness of and funding for their work.

“Every single parish in the Archdiocese of Philadelphia has a missionary speak at it during the summer,” said Michele Meiers, assistant director of the archdiocesan Pontifical Mission Societies.

The societies, present in each diocese and archdiocese, form a worldwide network at the service of the pope, supporting the proclamation of the Gospel through prayer and charity.

In 1922, Pope Pius IX named four existing organizations as the Pontifical Mission Societies, which in total now aid some 1,110 mission dioceses throughout the world.

The Society for the Propagation of the Faith (SPF) supports the evangelization efforts of the local church, the Missionary Childhood Association (MCA) educates children about their part in the church’s missionary outreach, the Society of St. Peter the Apostle trains the next generation of missionary clergy and consecrated religious, and the Pontifical Missionary Union focuses on forming clergy, religious and pastoral leaders more deeply in their role as evangelizers.

In the Philadelphia Archdiocese, the societies are directed by Msgr. James Beisel, and through an annual Missionary Cooperation Plan (MCP) Appeal, faithful are introduced to a missionary who gives an inside perspective on bringing the Gospel to the world.

Many times, that speaker is already a familiar face, since the MCP gives “first priority to religious orders working in the archdiocese who have a presence abroad,” said Meiers.

“They live here and are running parishes, schools and chaplaincies,” she said. “We try to keep it as local as possible, so they’re not spending $3000 to take a plane here.”

The speakers “present the face of mission today,” said Meiers. “They’re men and women religious, and lay people, who are giving up their lives still because they know Jesus commanded them to go out and tell the world about him. They know that in their hearts.”

One woman religious, who had grown up in India, knew from the age of seven that she was called to the missions.

“When she was a kid, she and her mom used to pick up people with mental and physical disabilities who’d been thrown out on the street, and take them to the Daughters of Mary,” said Meiers. 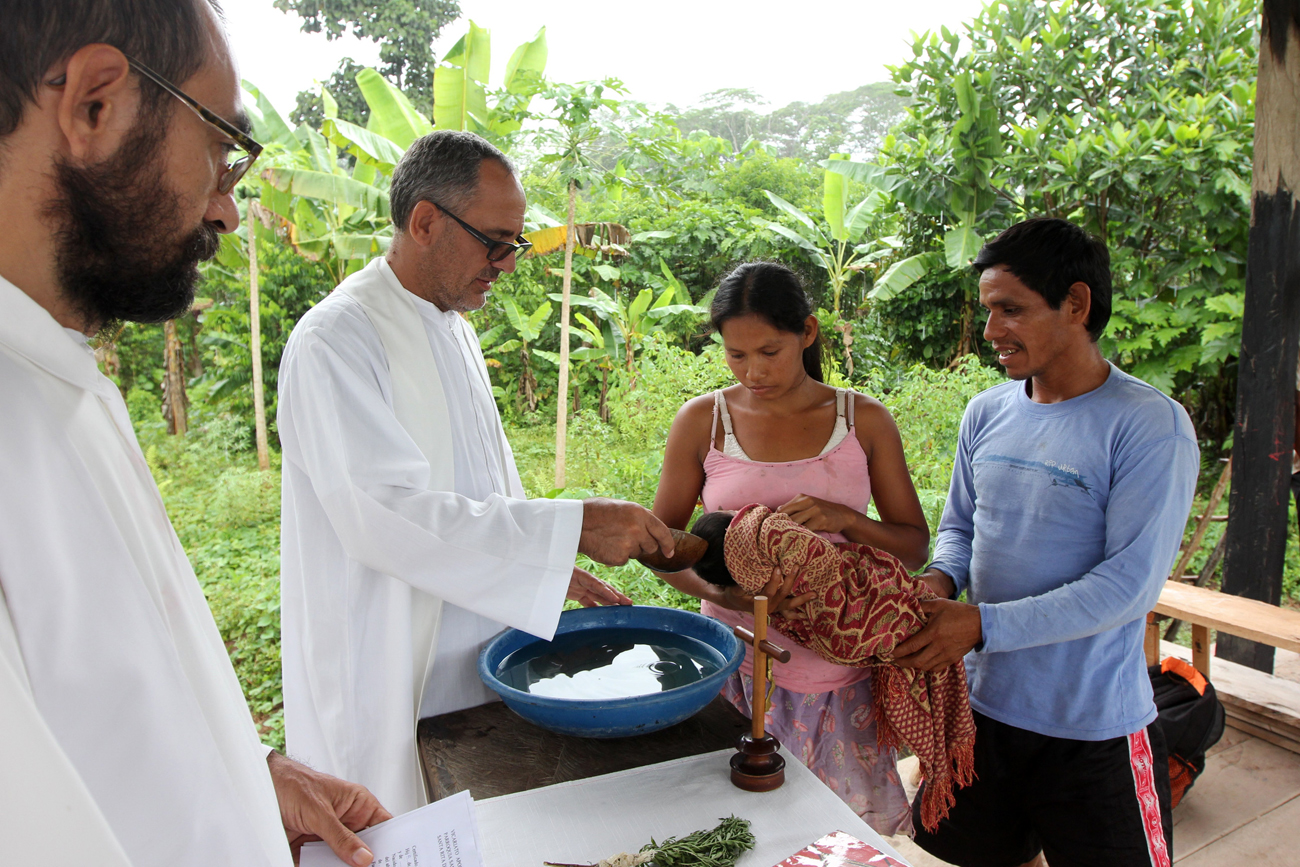 Despite the global reach of social media, evangelization will always require the face-to-face, hand-in-hand work of missionaries, she added.

Meiers cited the Maryknoll order in Kenya as one example of how missionaries provide both practical assistance and eternal hope.

“People there have literally been thrown out of their houses by the government, which realized it could make money off that land by growing coffee,” she said. “Now, they have no resources, and not enough land to grow anything or raise cows.”

“They’ve built a system of communication with group leaders who check up on everybody,” said Meiers. “If someone is having a baby, they alert the priest, who can help get the woman to a clinic. If he weren’t there, who would they go to?” 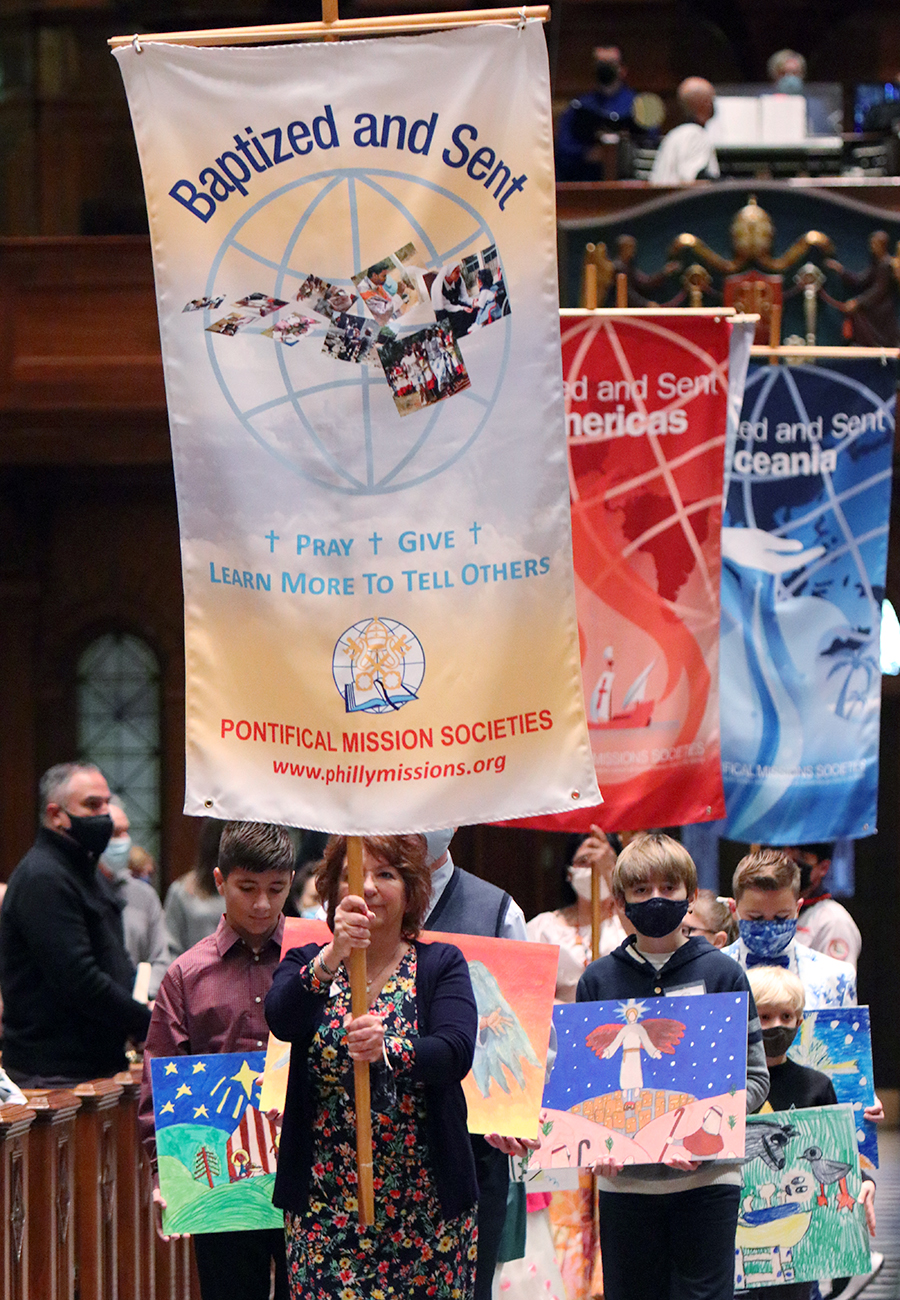 Michele Meiers, assistant director for the archdiocesan Pontifical Missions Society, carries a banner during the entrance procession for the Oct. 24, 2021 World Mission Sunday Mass at the Cathedral Basilica of SS. Peter and Paul. (Sarah Webb)

In areas hostile to Christianity, missionaries — often at great risk to their lives — simply “educate the way Christ would have, through works of mercy,” she said. “You need no words to prove to people you’re Catholic.”

Most Westerners would be shocked by the acute poverty, starvation and technological deprivation missionaries routinely encounter in their work, Meiers added.

In many places across the globe, “it’s very much the same as it was 50 or 100 years ago,” she said. “They still don’t have electricity or cars, and they draw water from watering holes. And we think, how could this be happening today?”

Even modern nations such as Ukraine face dire missionary needs, Meiers added. Amid this year’s brutal invasion by Russia, a collection organized by her office raised some $15,000 in humanitarian relief for the war’s victims.

At the same time, traditional mission countries have now emerged as evangelizers themselves, especially as Western countries have become increasingly secularized, said Meiers.

“Those seeds planted earlier have grown,” she said. “They now have 700 to 800 coming out of their seminaries each year.”

With clergy and religious from other nations sent to minister in the Philadelphia area, Meiers and her colleagues work closely with the archdiocesan Office for Cultural Ministries to connect pastoral communities.

Philadelphia has a long history with Catholic missions, one spanning more than 110 years, said Meiers.

The archdiocese was one of the first to receive funds from SPF founder Blessed Pauline Jaricot, a French laywoman who in 1822 organized a collection for what was then the mission Diocese of Louisiana, which stretched from the Florida Keys to Canada.

And today, local faithful can continue that history in a few simple ways, said Meiers.

“Prayer and sacrifice are more important than anything else,” she said. “If you could just say a Hail Mary or a rosary every day for the people in the missions.”

Modest but steady donations to the missions are also essential, she said.

“A typical mission family lives on $2 a week,” she said. “What is it to give up a coffee once a week to help somebody out?”

One elderly donor has been sending the archdiocesan missions office $5 a month for at least 15 years, Meiers said.

“It’s the faithfulness, not the amount, that counts,” she said. “The world may be getting smaller, but the need isn’t.”

NEXT: Seminary alums gather to ‘spiritually recharge’ for ‘constant invitation’ to encounter Christ