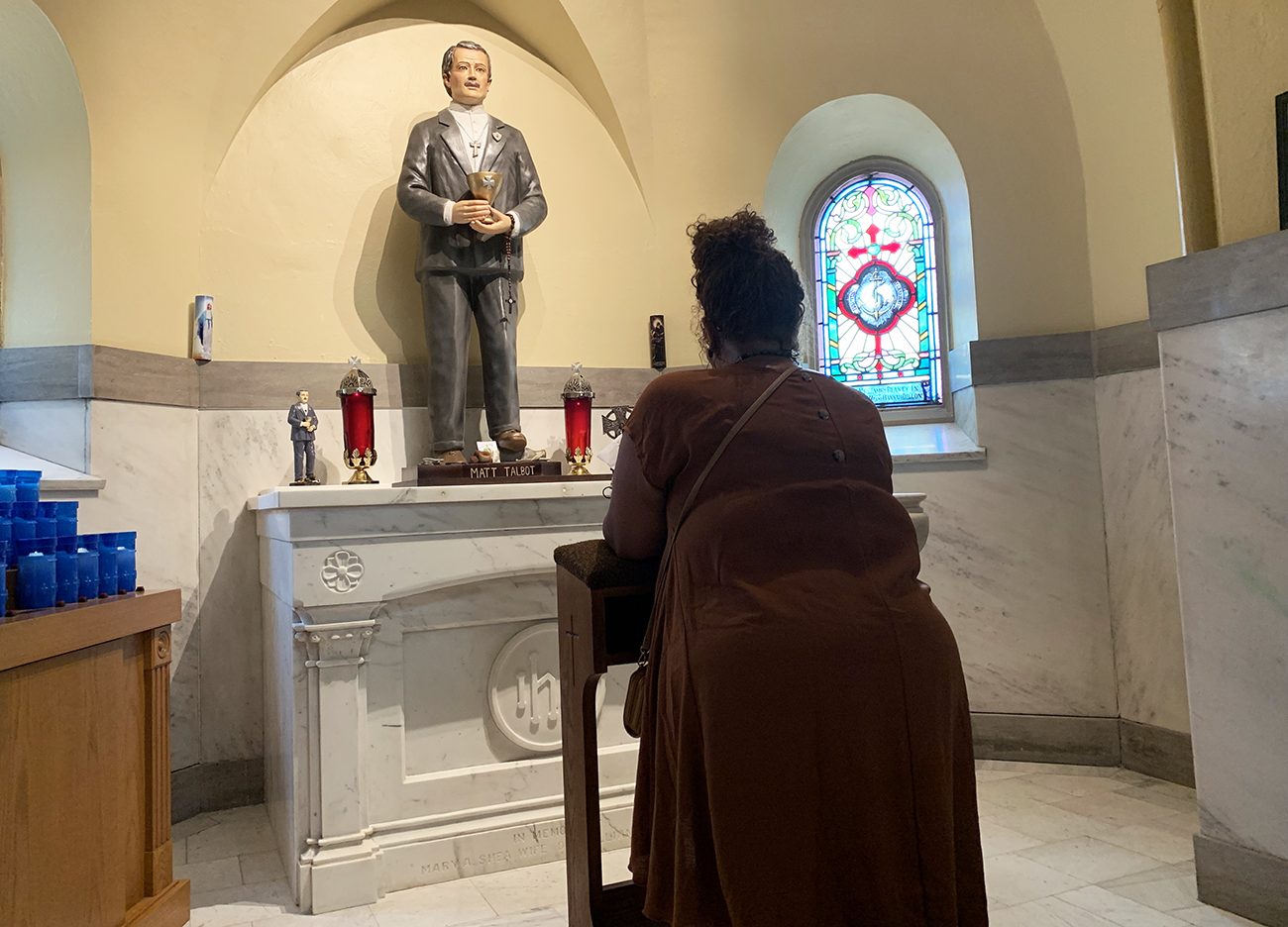 A client of Mercy Hospice, a ministry of archdiocesan Catholic Social Services, prays before an image of Venerable Matt Talbot at St. Gabriel Parish in Philadelphia, July 21. (Gina Christian)

The Irish laborer, who died in 1925, renounced a life of alcoholism begun at age 12, taking what became a permanent sobriety pledge through the Dublin-based Pioneer Total Abstinence Association of the Sacred Heart.

Talbot went on to lead a quiet, ascetic life that included daily Mass, prayer, Scripture reading and charitable works. Fatally collapsing on a Dublin street en route to church, he was discovered to have regularly worn chains – likely symbolizing his deep devotion to Mary — under his garments.

Pope Paul VI declared Talbot “venerable” in 1975, and the Irishman is now invoked as an intercessor by a number of ministries for those suffering from addiction.

“He is a classic example of a heavenly helper for every age group and every time,” said Father Francis Foley, pastor of St. Gabriel. “He is somebody who has not only experienced the trials, but God’s grace — and with God’s grace, he was able to carry his cross and overcome the traps that the devil had laid before him.”

One of those traps is “thinking we are our sins,” said Father Douglas McKay, who grew up in St. Gabriel Parish and later founded Our House Ministries, a Catholic recovery outreach located across the street from the church.

Father McKay – who lost one of his brothers to a drug overdose several years ago – said those recovering from addiction are often overwhelmed by feelings of guilt and shame, prompting a cycle of relapses that can prove fatal.

During a brief prayer service with the Mercy Hospice women, six of the outreach’s former residents who had succumbed to addiction over the past year were commemorated.

Father McKay and OHM executive director Ken Johnston, host of the Saints and Sinners” radio show, encouraged the Mercy Hospice pilgrims to seek God’s grace, particularly through the sacraments, in their recovery.

Both invited their visitors to participate in the St. Gabriel chapter of the Calix Society, which was founded in the U.S. some 20 years after Talbot’s death. The global Catholic recovery group, based in Glenside and named after the Latin word for “cup,” ensures 12-step-based sobriety by promoting sanctification through the sacraments. Meetings generally feature Mass, eucharistic adoration, the rosary, reflection and fellowship.

According to provisional data from the Centers for Disease Control (CDC), there were an estimated 107,622 drug overdose deaths in the U.S. during 2021, an increase of almost 15% over the previous year.

Fentanyl, a synthetic opioid, is behind the numbers, said Johnston and Father McKay.

“It’s still as bad as ever on the street. There’s a fentanyl craze going on,” said Johnston. “They’re getting that instead of heroin. Whether they think they’re getting heroin or not, (fentanyl) is what the dealers are dealing.”

At the same time, he urged the pilgrims to remember that “all of our sins are a drop in the ocean of God’s mercy,” referencing an image frequently used by St. Faustina Kowalska.

“You think you’re the only one who struggles, and then to see someone (like Matt Talbot) who came so far,” she said. “We need to be easier on ourselves. You can do this; you’re not the only one traveling that road.”

At the same time, Stoner wasn’t surprised by the gathering’s impact.

“I knew the Holy Spirit would work through us,” she said.

NEXT: Summer mission appeals more vital than ever to spread the Gospel