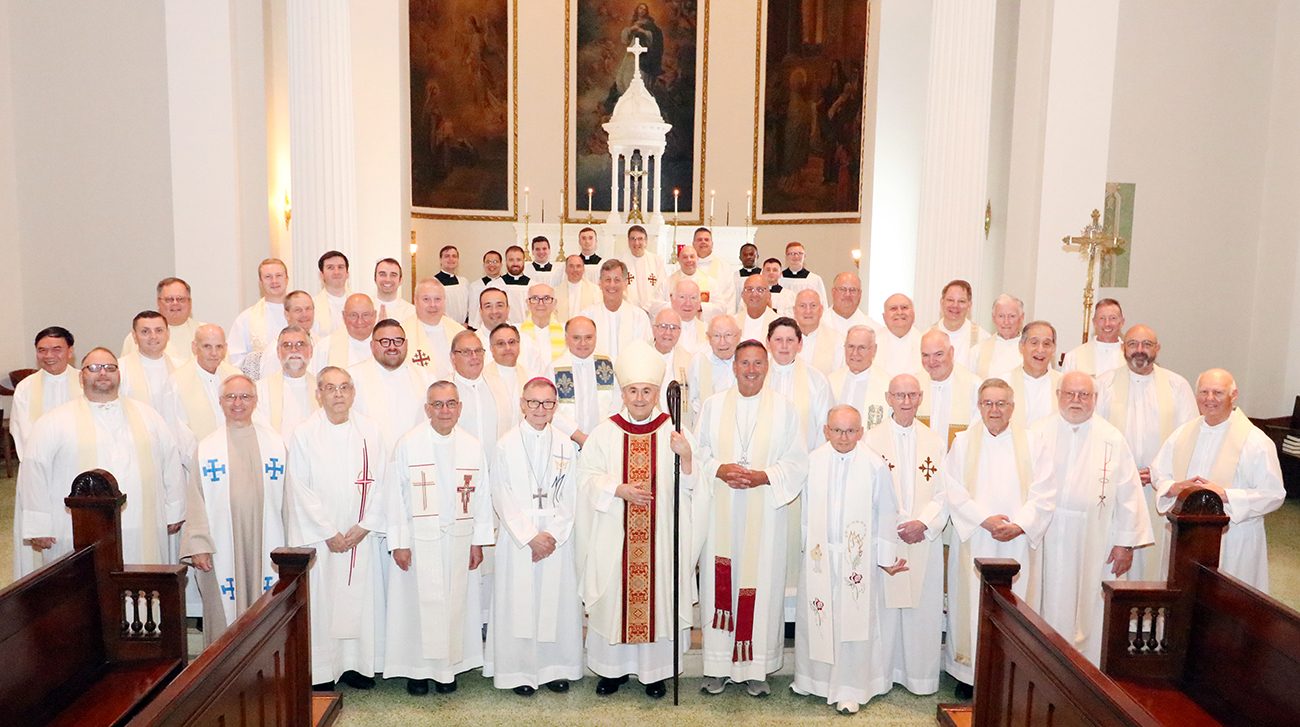 Dozens of priests recently returned to their alma mater to “spiritually recharge” for the work of “accompanying the people.”

The five-day schedule of daily Mass, prayer, reflection, conferences and fellowship was needed more than ever, as priests face a number of pastoral challenges – particularly “the decline in active participation” among Catholics, said Father Louis Bellopede, pastor of St. Agnes Parish in West Chester.

“I’m not only talking about Sunday Mass, but also about weddings, baptisms and funerals,” said Father Bellopede, who co-chaired the retreat with Father Gerald Carey, pastor of Our Lady of the Assumption Parish in Strafford; and Diocese of Harrisburg priest Father Neil Sullivan, pastor of Good Shepherd Parish in Camp Hill, Pa.

With an ongoing rise in non-religiously affiliated persons – referred to as “nones” by social researchers – “there’s this trend that people are not actively participating in the life of grace, in the sacraments and in the life of their parish,” said Father Bellopede.

At the same time, “they want to be spiritual,” he said. “But they’re not going to the fountain of all grace, which is Christ himself and the church. They’re looking for it elsewhere, and they’re missing it.”

Bishop Gainer’s presentations on iconography — an ancient art form intended to deepen devotion through contemplation of a sacred image – were both powerful and timely for the priest retreatants, said Father Bellopede.

“Icons are windows into heaven, and they open up a whole (realm of) discovery,” he said. “You’re not just looking at a painting. Art teaches a theology.”

Through the icons, said Father Bellopede, retreat participants were drawn into deeper communion with Christ, “who calls us to accompany” faithful and seekers alike.

In doing so, priests must “constantly invite” others to encounter Christ, he said.

“We can never stop on that journey; it continues every single day,” said Father Bellopede.

Nor can any of the faithful slow their steps, he added.

“All of the baptized … the entire church” should bring the Gospel message to the world, said Father Bellopede. “It’s been said that ‘evangelization is not a movement in the church, but it’s the church in movement.’”

PREVIOUS: Summer mission appeals more vital than ever to spread the Gospel

NEXT: Human life ‘an incredible gift from God’ that must be honored, says archbishop