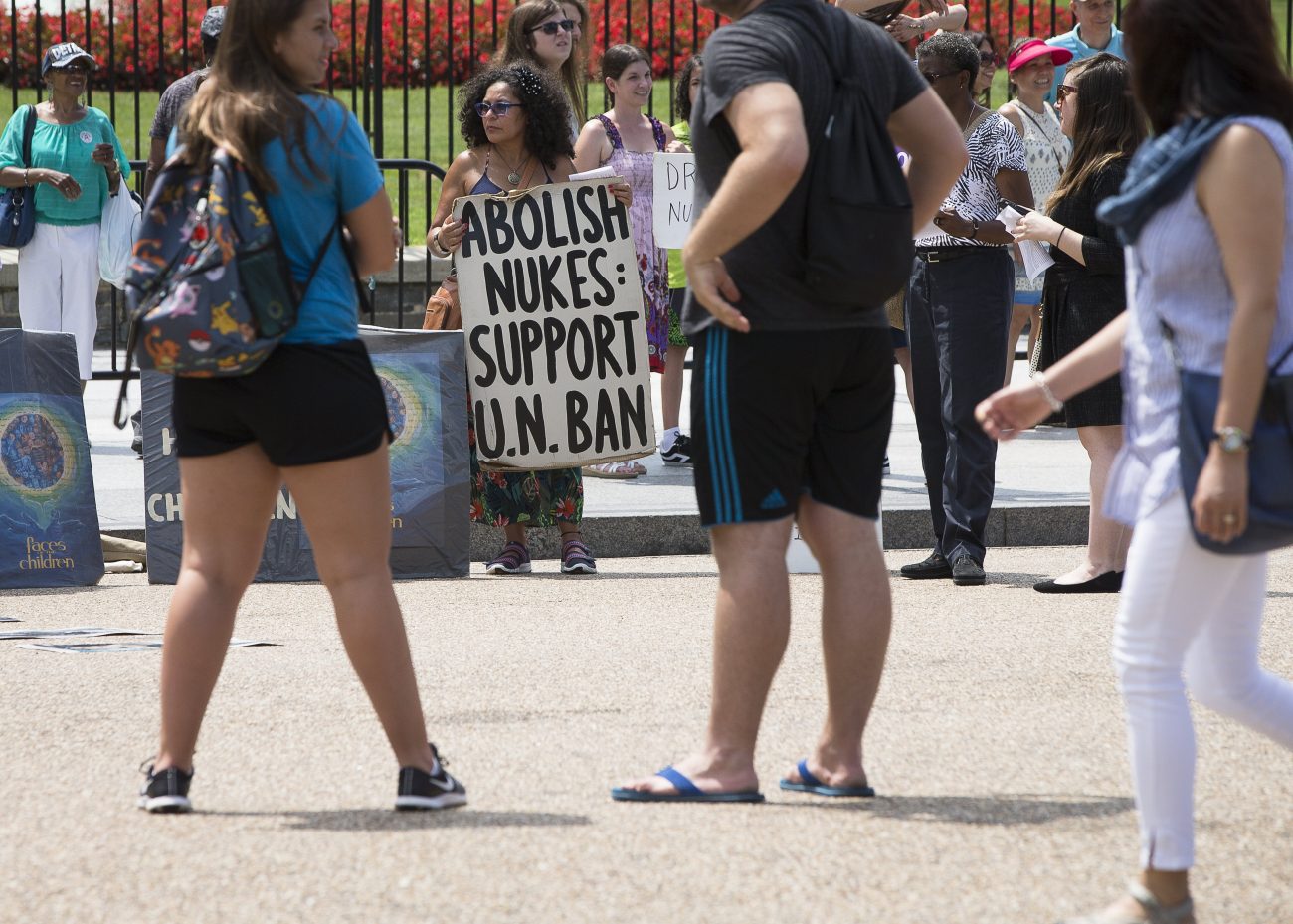 Peace activists hold a Catholic prayer service of repentance near the White House Aug. 9, 2018, for the use of nuclear weapons on Japan during World War II. The atomic bomb was dropped on Nagasaki Aug. 9, 1945. Hiroshima was hit three days earlier. (CNS photo/Tyler Orsburn)

Archbishop John C. Wester of Santa Fe, New Mexico, thinks it’s time for serious conversations about how to achieve nuclear disarmament — not just for the United States but for all countries of the world.

And he’s trying to initiate such discussions, beginning in his own archdiocese, home of two national laboratories — Sandia and Los Alamos — where nuclear weapon research and development continues.

The archbishop hopes the pastoral letter he released in January, “Living in the Light of Christ’s Peace: A Conversation Toward Nuclear Disarmament,” can be a starting point.

The document is the most recent and perhaps most heartfelt from a U.S. bishop seeking to end the nuclear arms race. His concern is that after decades in which arms control treaties led to reductions in nuclear armaments, a new arms race is already underway as the U.S. and Russia, the world’s primary nuclear powers, develop new weapons systems.

“I think we’ve been lulled into a false sense of complacency. I think it’s important as the archbishop of Santa Fe that I say something, that the archdiocese has a seat at the table on this discussion, because this is the birthplace of the nuclear bomb,” Archbishop Wester told Catholic News Service.

In 2017, he visited Japan with other U.S. bishops, stopping in the cities of Hiroshima and Nagasaki. An estimated 214,000 people died in twin atomic blasts days apart in August 1945, hastening the end of World War II. It was the only time nuclear weapons have been used in war.

Back in Santa Fe weeks later, Archbishop Wester took friends to the Bradbury Science Museum, which chronicles the story of the development of nuclear weapons at the nearby Los Alamos National Laboratory. 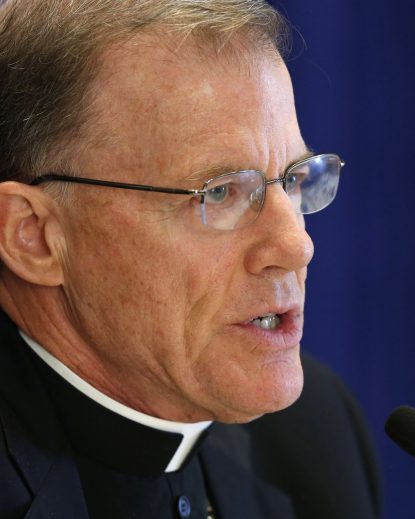 “Seeing the museum and the creation of these bombs, it just struck me how here I am in the center of all this,” Archbishop Wester said. “I had a very somber visit to Japan laid on top of this realization of how much we’re involved then and now in nuclear armament production.”

His concern is that in any future nuclear exchange, however limited, Earth will never be the same and it’s likely the planet — and virtually all life — will be destroyed.

Pope Francis also had a role in Archbishop Wester’s decision to issue the pastoral letter.

Throughout his papacy the pope has appealed to the world’s nine nuclear weapons-possessing nations to dismantle their arsenals for the good of humanity. In 2017 the Holy See became the first government to sign the Treaty on the Prohibition of Nuclear Weapons. The treaty entered into force in January 2021.

But it was the pope’s comments during a November 2019 visit to Hiroshima that stayed with Archbishop Wester.

“The use of atomic energy for purposes of war is immoral, just as the possessing of nuclear weapons is immoral, as I already said two years ago,” the pope said. “We will be judged on this.”

Archbishop Wester recalled thinking that “the pope is right on target and whether people pay attention to him or not, I need to echo that sentiment.”

The archbishop set out to draft the pastoral letter, conferring with nuclear scientists, moral theologians, political leaders and disarmament advocates. The document challenges conventional political thinking that possessing nuclear weapons serves as a deterrence to potential attacks from other nuclear powers.

In the document, the archbishop describes his thoughts and the anguish of realizing how the Japanese children ran to the windows of their school to see what caused the bright flash only to be incinerated within seconds by the shock wave from the catastrophic nuclear explosion. He also recalls his own fears of running home from school in his San Francisco neighborhood during the 1962 Cuban Missile Crisis while scanning the skies for nuclear bombs being dropped from Soviet bombers.

Archbishop Wester said no child should have to live in such fear or face the possibility of nuclear annihilation. That’s why he wrote his pastoral letter, he said.

He is contemplating his next steps and how to use the letter to invite people of faith, nuclear scientists, government officials and military leaders to embark on the long journey to ending the nuclear threat. Among them is building a network involving parishes in the archdiocese to begin discussing alternatives to nuclear warfare.

“One of the main thrusts of the pastoral is to engage and sustain a conversation. It wasn’t trying to create a debate or an argument. It was just trying to say this is an important issue. We need to talk about it. However you fall on this issue, we need to talk,” he explained.

“My innate belief is if people really talk about it seriously and honestly and transparently, then they’ll see this really is untenable,” he said.

Archbishop Wester stressed that he is not calling for unilateral disarmament by the U.S. He acknowledges there are threats in the world and that all nuclear powers must agree to disarm together.

He also recognizes that the nuclear industry is worth billions of dollars annually to the New Mexico economy. He called for a “just transition” of jobs so that people are not forced to give up their livelihoods, but can begin working to use technology to the betterment of humanity.

Some scientists the archbishop has talked with already have told him, he said, they are in “this work with the idea that they need to be there now, but they hope we’re moving in a trajectory toward eliminating nuclear armaments one day.”

He also credited the Catholic Nonviolence Initiative, a program of Pax Christi International, with helping Catholic leaders at the Vatican and people around the world understand the importance of nonviolent alternatives to conflict.

Nonviolence, he said, is at the root of the teachings of Jesus and he hopes people will begin to understand the example Christ demonstrated throughout his public life.

Meanwhile, Archbishop Wester will continue to share the message of his letter in the months ahead.

In the short term, he will deliver the opening a keynote address Aug. 5 during Pax Christi USA’s 50th anniversary conference in Arlington, Virginia. He’ll follow that with a Mass marking the 77th anniversary of the atomic bombing of Nagasaki Aug. 9 at the Cathedral Basilica of St. Francis of Assisi in Santa Fe. The Mass will be followed by a panel discussion of interfaith leaders on the need for nuclear disarmament.

His message in both venues, he said, will focus on not fighting nor fleeing, “but rather to take the third path of giving witness to the truth” that Jesus espouses.

“I’m a pastor, not a nuclear scientist. I’m not a politician. I don’t really care what party you’re in,” he said.

NEXT: USCCB issues annual report on compliance with abuse charter