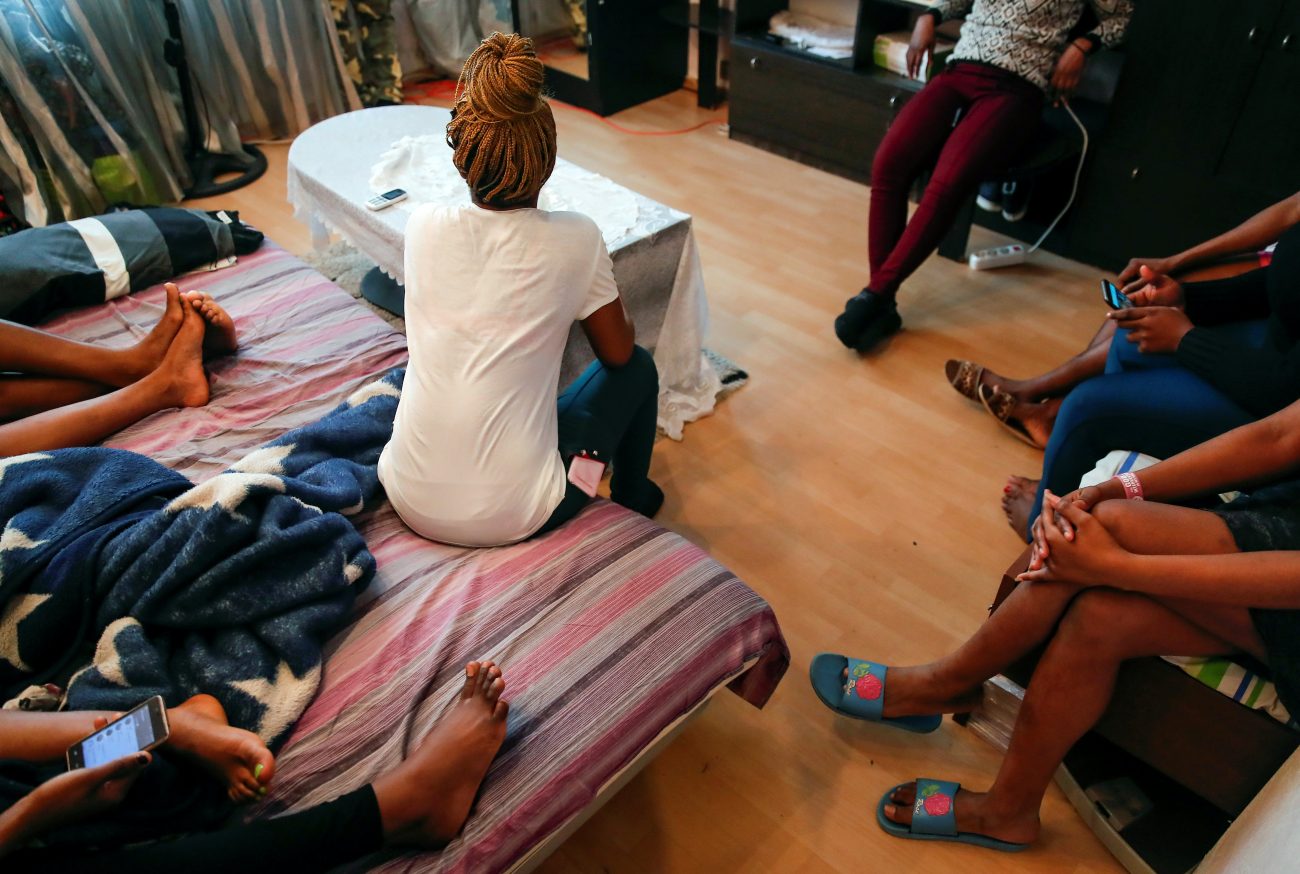 Nigerian women, rescued from human traffickers, gather in a shelter on the outskirts of Moscow Feb. 21, 2019. (CNS photo/Maxim Shemetov, Reuters)

WASHINGTON (CNS) — The predators engaged in human trafficking “never take a holiday, nor can we,” a U.S. congressman who holds a top international anti-trafficking post told world leaders gathered July 2-6 in Birmingham, England.

Those “who exploit and abuse vulnerable women, children and men never cease in their nefarious work,” U.S. Rep. Chris Smith, R-N.J., said during the 29th annual session of the Parliamentary Assembly of the Organization for Security and Cooperation in Europe (OSCE).

“Our commitment to preventing human trafficking, protecting and helping survivors reclaim their lives, and prosecuting those who commit these horrific crimes must be strong, powerful and courageous,” he said.

The congressman urged the OSCE’s nearly 60 member nations to step up their efforts to implement and strengthen laws combating modern-day slavery.

Smith is the OSCE Parliamentary Assembly’s special representative on human trafficking. He was first appointed to the post in 2004.

In Washington, the Catholic lawmaker co-chairs the Tom Lantos Human Rights Commission of the U.S. Congress, and he is the prime author of the Trafficking Victims Protection Act of 2000 — the United States’ historic, comprehensive law to combat sex and labor trafficking.

“As we emerge from the pandemic, each of us need to examine our own country’s anti-trafficking in persons’ laws and action plans in place before and during COVID-19 and decide whether new initiatives are needed,” he said.

“Housing and survivor education and employment programming are new provisions in our House bill,” he said. “We see these as critical to prevent trafficking at all levels, including for survivors who may become vulnerable to re-trafficking due to the hard economic times.”

“We must invest in our survivors’ futures and help them to heal and take on leadership roles, if they choose to do so,” he said.

Smith has been spearheading an effort by House members to push for passage of new, comprehensive anti-trafficking legislation he has written, especially as the United States faces its worst border crisis in history with heightened concerns for a surge in human trafficking.

Figures from U.S. Customs and Border Protection figures now show that more than 2 million unauthorized migrants came across the U.S.-Mexico border in the calendar year 2021 “and were apprehended or turned themselves in — in addition to those not stopped or detected,” according to the website BorderReport.com.

The CPB also said that the agency had nearly half a million “migrant encounters” at southern border in first quarter of the current fiscal year.

The recent tragic deaths of 53 migrants being smuggled into the U.S. has thrown into sharp relief the exploitation by human traffickers of those seeking a new life in this country.

On June 27, the migrants were discovered in a sweltering cargo section of an abandoned semitruck near San Antonio; they were being smuggled into the U.S. Only a few in the group survived, mostly children.

Smith also emphasized the urgent need for the international community to address the historic number of women and children vulnerable to trafficking as millions of Ukrainians have fled the violence and destruction of Russia’s war against their nation.

“Most cross the Ukrainian border without resources or a place to stay, making them extremely vulnerable to criminals, including human traffickers,” said Smith. “The longer the refugees have to remain outside of Ukraine, the more vulnerable they will become as they try to find longer term housing and employment.”

Based in Europe, the OSCE Parliamentary Assembly is comprised of 323 members from 57 participating states who meet to advance human rights, security and economic cooperation.

There are two major types of human trafficking: sex trafficking and labor trafficking, according to the website of the U.S. Catholic Sisters Against Human Trafficking.

“People being trafficked in every country in the world,” it said. “The greatest number are in South Asia — India, Pakistan, Bangladesh and Nepal. Africa and South America both have large numbers of trafficking victims, and the recent increase in human trafficking is bringing thousands of victims to many countries in Europe, North America and Southeast Asia.

According to a 2014 report from the State Department, “the United States is a source, transit and destination country for men, women and children — both U.S. citizens and foreign nationals — subjected to sex trafficking and forced labor, including domestic servitude.”

PREVIOUS: After fires set, pastor encourages people to remember ‘we are the church’