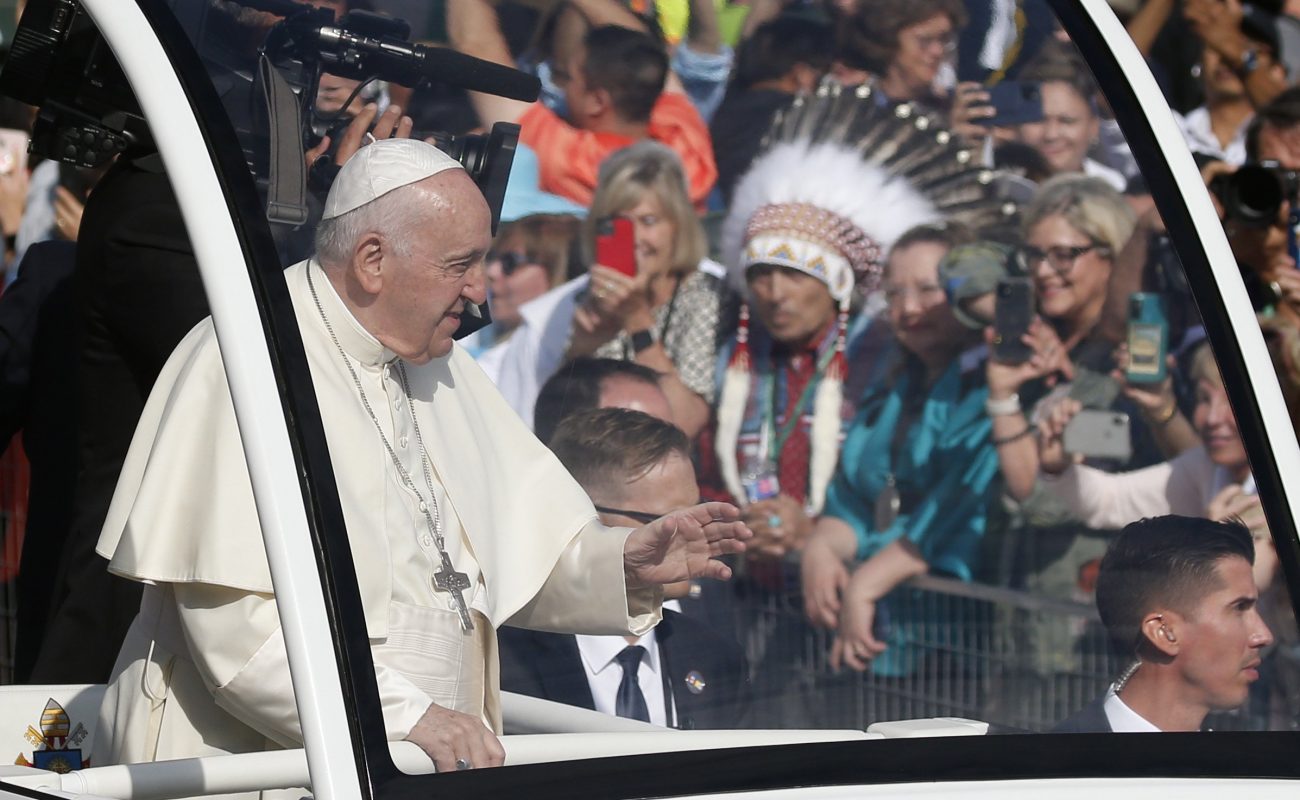 EDMONTON, Alberta (CNS) — Celebrating the feast day of Jesus’ grandparents, Pope Francis not only urged people to honor their elders, but he asked them to think about what they will hand on to future generations.

“We received so much from the hands of those who preceded us. What do we, in turn, want to bequeath to those who come after us?” the pope asked in his homily July 26 at Mass in Edmonton’s Commonwealth Stadium.

Do people want to hand on a weak, “rosewater” faith or a living faith, he asked. “A society founded on personal profit or on fraternity? A world at war or a world at peace? A devastated creation or a home that continues to be welcoming?”

Organizers said they had distributed 60,000 tickets for Pope Francis’ Mass in the stadium on the feast of Sts. Joachim and Anne, Jesus’ grandparents. But the pope’s arrival was delayed briefly as ticket checkers struggled to get people into the stadium efficiently.

Priority for the free tickets was given to First Nation, Inuit and Métis survivors of residential schools and elders, but the liturgy was the first event of the pope’s July 24-29 visit to Canada that was not focused almost exclusively on the Indigenous communities.

However, an Indigenous artist created the pope’s vestments for Mass. Julia Kozak, the artist, made a beaded miter and two beaded robes: a chasuble the pope would have worn if he had presided over the entire Mass, and a cope, which he wore as he presided only over the Liturgy of the Word and gave the homily.

Because of the pope’s ongoing knee pain, Archbishop Richard Smith of Edmonton was the main celebrant of the Liturgy of the Eucharist.

The vestments echoed the style and custom of a traditional dancer from the Nisga’a Nation on the west coast of British Columbia. Before the pope arrived, Kozak explained that the copper leather circle in the center of the cross was meant to symbolize Jesus present in the Eucharist as the center of Catholic sacramental life. The curved lines leading out from the cross were reminders of how faith, holiness and goodness gently spread like the ripples in water.

Gentleness came up repeatedly in the homily of 85-year-old Pope Francis.

In his ode to grandparents, he said they were the ones who “took us by the hand when we were afraid, reassured us in the dark of night, encouraged us when in the full light of day we faced important life decisions.”

For many people in many cultures, grandparents were the ones who created a “familiar” atmosphere of faith, he said. “Because that is how faith is fundamentally passed on: in the mother tongue, in dialect, it is passed on at home, through affection and encouragement, care and closeness.”

“From our grandparents,” he said, “we learned that love is never forced, it never deprives others of their interior freedom.”

“That is the way Joachim and Anne loved Mary, and that is how Mary loved Jesus — with a love that never smothered him or held him back but accompanied him in embracing the mission for which he had come into the world,” the pope said.

Individual Catholics and the church as a whole need to learn to share the faith with that same gentle style, he said. “May we learn never to pressure the consciences of others, never to restrict the freedom of those around us, and above all, never to fail in loving and respecting those who preceded us and are entrusted to our care. For they are a precious treasure that preserves a history greater than themselves.”

Encouraging people at the Mass to honor and respect their grandparents and other elders, the pope suggested that families could create “a small family memorial” with photos and objects that had belonged to their grandparents or elders. Passing by the little collection, family members would be reminded to pray.

“In the fog of forgetfulness that overshadows our turbulent times, it is essential to cultivate our roots, to pray for and with our forebears, to dedicate time to remember and guard their legacy,” the pope said. “This is how a family tree grows; this is how the future is built.”

And part of honoring one’s elders, he said, is working to build the kind of society they had wanted, a society that is more just, more fraternal and marked by solidarity.

“Sustained by those who are our roots, now it is our turn to bear fruit,” the pope said. “We are the branches that must blossom and spread new seeds of history.”

PREVIOUS: Indigenous and Catholic: One can proudly be both, pope says

NEXT: Philippine diocese appeals for aid after magnitude 7 quake