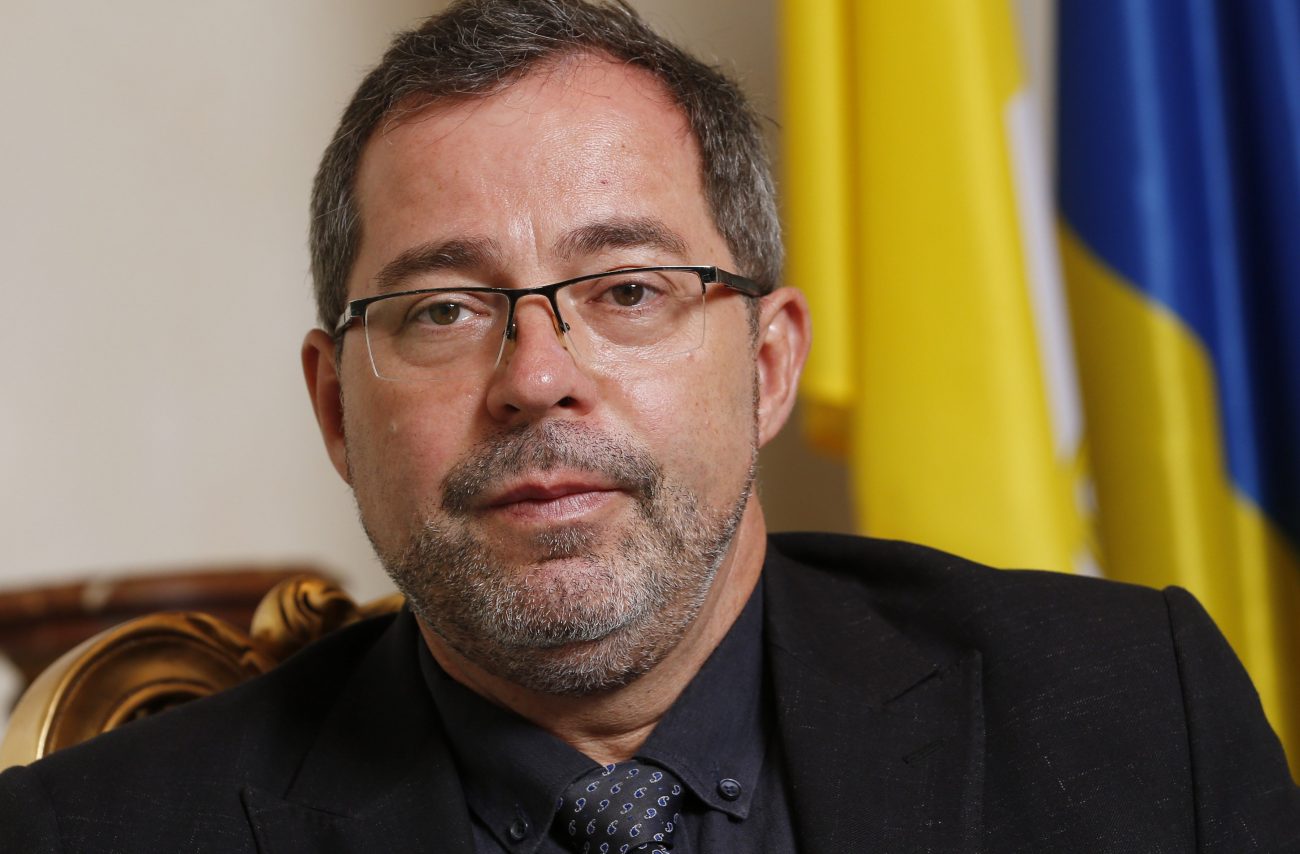 Andrii Yurash, Ukraine's ambassador to the Holy See, is pictured during an interview with Catholic News Service at the Ukrainian Embassy to the Holy See in Rome July 18, 2022. He spoke about the current situation in his country, the possibility of a papal trip to Kyiv and the effect the war has had on relations between the Catholic Church and the Russian Orthodox Church. (CNS photo/Paul Haring)

VATICAN CITY (CNS) — Since the beginning of Russia’s war on Ukraine, Pope Francis has consistently expressed his closeness to the people of the country and reminded Christians on an almost weekly basis to not grow indifferent to the tragedy of war.

During a July 14 meeting with members of several religious congregations, the pope warned that among “the greatest dangers now” was the world slowly turning its gaze away from the conflict.

“A few days ago, I saw in the newspaper that the news about the war was on Page 9!” the pope said. “This is no longer a problem that is of interest; this is awful.”

For Andrii Yurash, Ukraine’s ambassador to the Holy See, Pope Francis’ consistent reminder of “the barbarism of war” is needed because “four months of war has made a lot of people around the world accustomed to this situation.”

“I have not seen any speeches by the Holy Father dedicated to the problems of the world in which Ukraine was not mentioned,” Yurash told Catholic News Service July 18.

It is “inspiring that the Holy Father understands and is not exhausted repeating again and again the importance of instilling peace” and calling for an end to the war, he said.

Appointed as Ukraine’s ambassador to the Holy See in December, Yurash’s move to Rome came much sooner than he had expected.

“For me personally, it will always be memorable that I received my Italian diplomatic visas on the first day of the war” in February, he recalled. Still in Kyiv, “I went to the Italian embassy; it was a very difficult, very hard atmosphere. I saw the beginning of the evacuation of the embassy. But in the first minutes after opening, I received my and my family’s passports from the Italian embassy.”

But like many Ukrainians, the ambassador knows the pain of having to leave behind a loved one. His oldest son, who also serves as a member of Ukraine’s parliament, “decided to be a regular soldier and to defend the country.”

Since coming to Rome, Yurash said, he has been moved by the concern of many, including Pope Francis, who asked about his son.

“When I presented my credentials, the Holy Father asked me about the personal consequences of the war, and I told him about my son,” he told CNS. “And later, I had another opportunity to see the Holy Father, and I was absolutely surprised, he asked me, ‘How is your son?'”

“I didn’t expect the Holy Father to remember so many details,” he added. “He assured me, like many other people here in the Vatican, that he is praying for me. And I really hope and believe that prayer will help (my son) survive.”

Yurash told CNS that Ukrainian authorities are grateful for the pope’s willingness to visit Kyiv. However, while the possibility of a papal trip seems more and more likely, no date had been set as of mid-July.

The only thing “we know for now is that its after Canada,” where the pope will be July 24-29.

However, Yurash said he doubts Pope Francis will be able to fulfill his hope of visiting Moscow to plead for an end to the war.

Russian President Vladimir Putin “perfectly understands” what the pope’s main message should be, the ambassador said. “It will be demanding; it will be very concrete, emphasizing that Russia is responsible for the war and has to do everything to stop the war. (Putin) will not be willing to answer positively. So, in this case, negotiations would not be successful for either side,” he told CNS.

The war, he added, also has strained relations between the Catholic Church and the Russian Orthodox Church, which he said is more aligned with the “interests of the Russian state.”

Yurash told CNS that he noticed “real changes in the perception of the Russian Orthodox Church by many, many people in the Holy See” who have “started to understand the real aims of Russian Orthodox policy toward the Catholic Church” and the Vatican.

“In my private, everyday communications with many figures related to the Holy See, I can see the same approach, and they are confirming that they are shocked by the position of the Russian church in this conflict,” he said.

Nevertheless, despite the complex relationship between the Vatican and Russia, Yurash said he hopes the Vatican will have a special place as a mediator if negotiations were to begin between Ukraine and Russia.

However, while there is still some hope, “it is very difficult to say at the moment” when negotiations would take place because “Russia is doing everything possible to prolong the war and make it painful not just for Ukraine, but for the whole world.”

Ukraine must “be strong and we need to be equal in this negotiation,” he said. “I think everybody in the West realizes that a much stronger Ukraine “will be in a better position to negotiate with Russia.

“Russia discovered that it is not so strong as (it thought it was) before the war” and that its strength “is just a myth and nothing more; without real power, without real support,” Yurash said.

“I really believe that not only Ukrainians in Ukraine, but also the rest of the world found out and saw the real face of the Russian totalitarian regime,” he said.