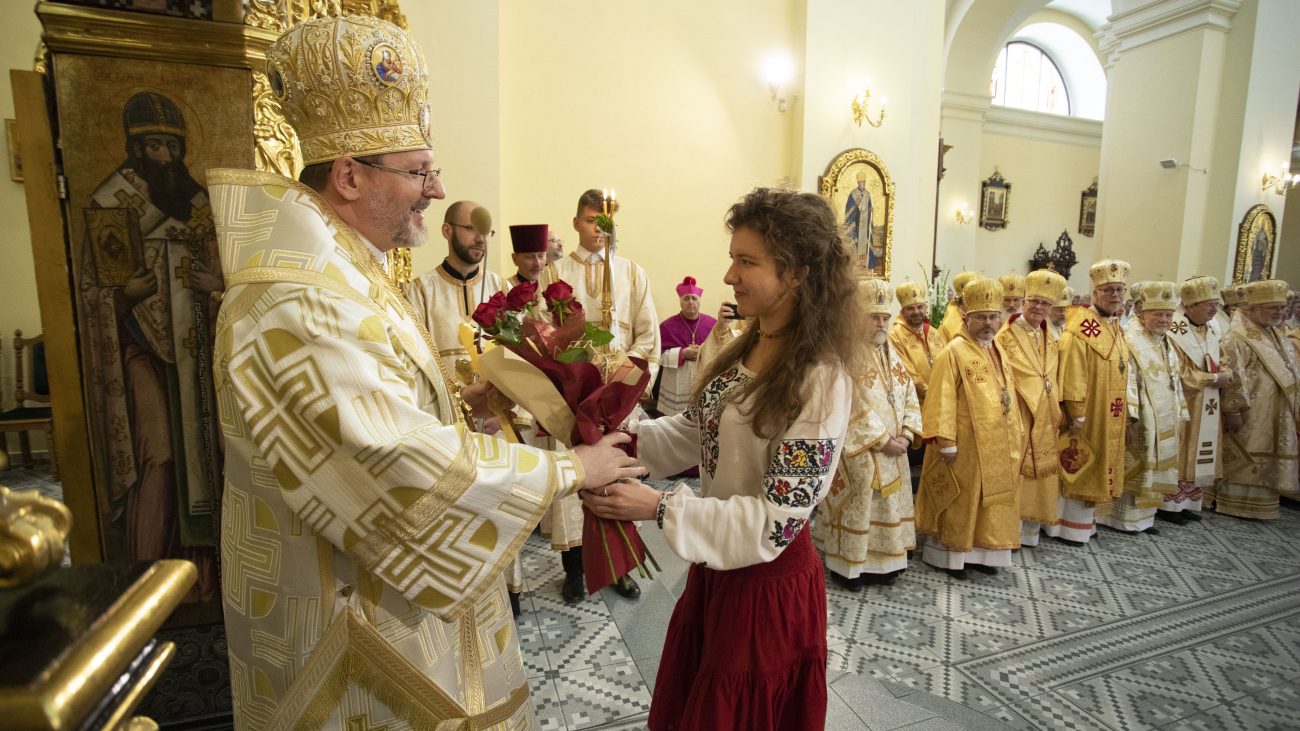 PRZEMYSL, Poland (CNS) — Prevented by war from meeting in Kyiv, 40 Ukrainian Catholic bishops from around the world met in Poland, less than 10 miles from the border with their homeland, in early July.

The meeting of the Synod of Bishops of the Eastern-rite church had been delayed two years because of the COVID-19 pandemic, but the war in their homeland, the heightened need for ministry to their people and the pastoral and psychological care of Ukrainians forced from their homes made the synod July 7-15 even more essential.

“We, as the church, have found ourselves on the front line of the information war. That is why it is essential for us to experience this synod, to feel the fraternal unity of our global church, which unites all Ukrainians around the world in Ukraine and in the diaspora,” said Archbishop Sviatoslav Shevchuk of Kyiv-Halych, head of the Ukrainian Catholic Church, at the synod’s opening Divine Liturgy July 7 in the Ukrainian Cathedral of St. John the Baptist in Przemysl.

The Ukrainian Catholic Church at home and abroad, he said, has become “a powerful voice” for sharing with the world “who Ukrainians are, what they fight for, what they live and die for.”

Archbishop Salvatore Pennacchio, Vatican nuncio to Poland, spoke before the Divine Liturgy, conveying the greetings of Pope Francis, who entrusted the bishops and their deliberations to the care of Blessed Mykola Charnetsky and the two dozen bishops, priests, nuns and laypeople beatified with him in 2001 as martyrs of Soviet persecution.

“In this very moment we better understand the circumstances in which these martyrs lived and died,” the nuncio said. Pope Francis is certain that “today, they protect their suffering people from heaven.”

Pope Francis urged the bishops to be close to their people, especially in the time of war, so they can give to them “the living water of hope.”

Hope and encouragement cannot be conveyed solely by words, he said. They must know that their pastors are with them, ready to listen and to help.

While the Ukrainian bishops were meeting in Poland, Archbishop Paul R. Gallagher, the Vatican foreign minister, told an Italian news program that a serious study of a possible papal trip to Kyiv would begin after the pope returned from Canada July 30.

Asked if the trip could take place in August, the archbishop said, “Possibly, I wouldn’t rule it out. However, a lot depends on the results of the trip to Canada. Let’s see how the pope holds up during this trip, which is also very demanding, and then we’ll see.”

Msgr. Robert J. Vitillo, secretary-general of the International Catholic Migration Commission and convener of the Catholic Response for Ukraine Working Group, met with the Ukrainian bishops in Przemysl July 9, sharing information about the global Catholic response to the needs of Ukrainians displaced by the war and listening to the bishops concerns about the current and future needs of their people.

The ICMC is a Vatican-approved network of the migration and refugee services of national bishops’ conferences and Catholic charitable agencies. Since shortly after Russia invaded Ukraine in February, the commission and the working group have tried to coordinate efforts to serve both people who have fled Ukraine and those displaced within the country.

“No activity report or international advocacy statement could ever hope to communicate the lessons that I have learned during my one-week visit to Poland and Ukraine which I will conclude today,” he told the bishops.

“My ‘teachers,'” he said, “were the displaced persons and refugees themselves and your own bishops, priests, religious sisters and brothers and the faithful laypersons who are laboring, day and night, in the Catholic churches, seminaries, convents, monasteries and schools as well as in private homes and local government buildings to offer comfort and build resilience among those millions of Ukrainians who have lost their limbs, are nursing multiple physical, emotional and spiritual wounds, and are deeply grieving the loss of life and of property in so many parts of Ukraine that have been subjected to such terrible violence.”

Msgr. Vitillo reported that after his introductory remarks, the bishops expressed “concerns about special protection of children and need to supply psycho-social experts to help integration — not assimilation — of refugees into host countries, the psychological and medical impact of the war on soldiers, women, children and men, as well as on priests — including issues related to substance abuse — the need for refugees and internally displaced persons to have access to work and decent housing, and the need for rehabilitation and development programs after the war is over.”