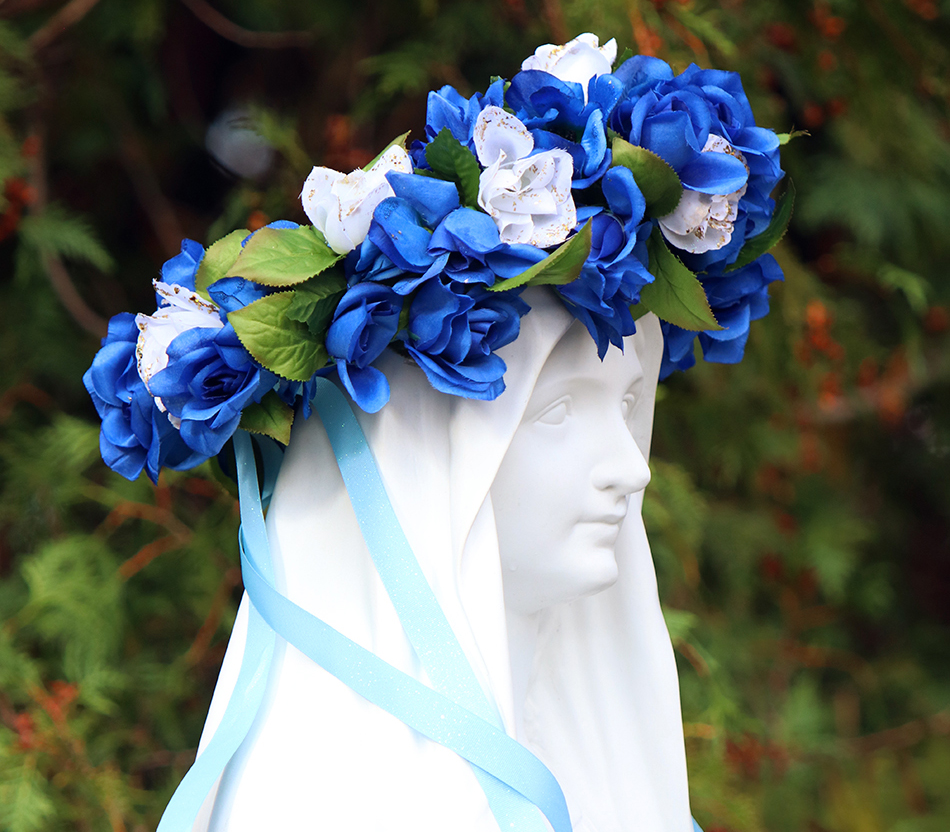 A statue of Mary stands crowned during an Oct. 30, 2021 dedication of a new rosary garden at St. Albert the Great Parish in Huntingdon Valley. (Sarah Webb)

The Assumption of Mary into heaven, celebrated as a solemnity Aug. 15, shows “what the Lord has in store for us,” said a Northeast Philadelphia priest.

“We look forward to the day when we will be like the Blessed Mother, united with God forever in a new and glorified body,” said Father Robert Lucas, parochial vicar at St. Cecilia Parish in the city’s Fox Chase section.

Though the feast is not a holy day of obligation this year in the U.S., the 8 a.m. Mass celebrated by Father Lucas to mark the Assumption drew some 150 faithful.

In his homily, the priest echoed the words of Pope Pius XII, who in 1950 proclaimed as divinely revealed dogma that “the Immaculate Mother of God, the ever-Virgin Mary, having completed the course of her earthly life, was assumed body and soul into heavenly glory” (Munificentissimus Deus, 44).

The formal declaration capped centuries of belief in and theological reflection on the Assumption, which St. Cecilia pastor Father Christopher Walsh described in his daily video message as “an amazing, amazing mystery.”

“(Mary) now shares fully in the glory of heaven, body and soul,” he said.

In the process, she has become “a go-to” for prayer, said Mary Ciamaichelo, coordinator of religious education at Presentation B.V.M. Parish in Cheltenham, home to a thriving weekly rosary club.

Bob Schumann, a parishioner at St. John Cantius Parish in the city’s Bridesburg section, turns to Mary throughout the day in prayer.

“I say two rosaries a day, even before I go to daily Mass,” he said.

Mike Cella, a member of St. Timothy Parish in Philadelphia and a local coordinator for the World Apostolate of Fatima, said the assumption of Mary “attests to the Resurrection.”

Following an Aug. 13 Fatima holy hour for peace at St. William Parish in Philadelphia, Cela described Mary as “our main intercessor” and “our real model” for Christian discipleship.

“We look to her … because she can bring us to her Son,” he said.

In his homily for a midday Aug. 15 Mass, St. William pastor Father Alfonso Concha said the Assumption pointed to “the virtue of hope” amid global instability.

And “we live in that hope every day,” said Father Walsh, who urged faithful to imitate Mary by cooperating with the divine plan.

“Be open to (grace) today,” he said. “Hear the Lord say to you, ‘Hail; you too are being filled with grace.’ Not in the same way and maybe not to the same extent as the Blessed Mother. But the God who filled her with grace fills us with grace as well. … And live as someone not only filled with grace, but destined for glory.”