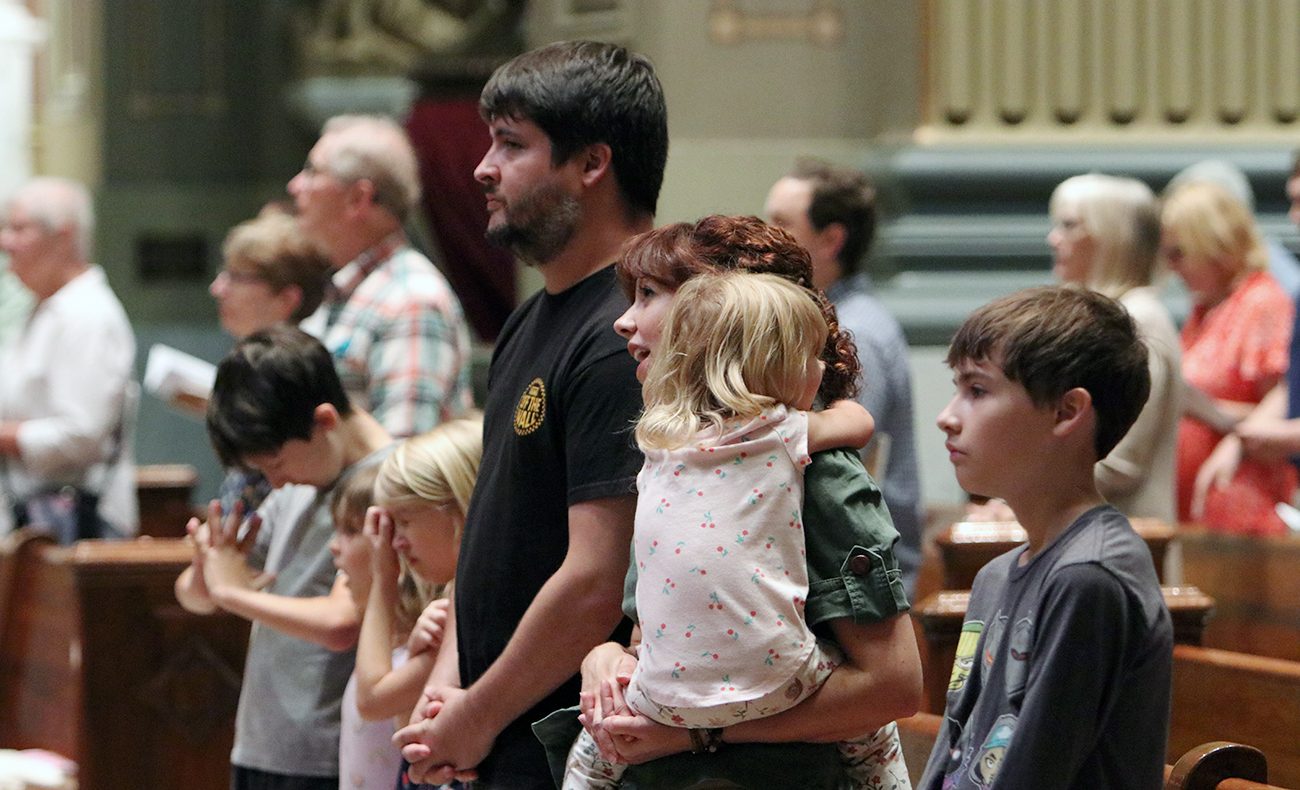 A family prays during a July 31 "Mass of Thanksgiving for the Gift of Human Life" celebrated by Archbishop Nelson Pérez at the Cathedral Basilica of SS. Peter and Paul. (Sarah Webb)

Human life is “an incredible gift from God,” and its “sacredness and dignity, from natural conception to natural death,” must be honored, said Archbishop Nelson Pérez.

The archbishop shared his reflections in a homily during a July 31 Mass he celebrated at the Cathedral Basilica of SS. Peter and Paul. Sponsored by the archdiocesan Office for Life and Family (OLF), the liturgy – which drew some 350 faithful — was offered in thanksgiving for the gift of human life, particularly in light of a recent Supreme Court ruling that the Constitution does not confer a right to abortion.

Quoting St. John Paul II, the archbishop said all human life must be seen in its eternal context, since “man is called to a fullness of life which far exceeds the dimensions of his earthly existence, because it consists in sharing the very life of God” (Evangelium Vitae, 2).

Archbishop Pérez said God’s creative designs contrasted with human efforts to “(play) around with life” and “go places we should never have gone to” in the process.

“We took into our hands as a society the actual defining of when life begins, and what life should look like and what life is,” he said. “How arrogant.”

The archbishop commended “faithful Christian people” who had prayed for decades, in front of abortion centers and in their own parishes, that the “millions and millions of abortions” performed since the 1973 U.S. legalization of abortion would be halted.

The Supreme Court’s June 24 decision in Dobbs v. Jackson Women’s Health Organization, which overturned the 1973 Roe v. Wade precedent on abortion, represented a partial answer to those prayers, said the archbishop, who reminded faithful of his personal maxim to “never underestimate the power of the Spirit of God working through you, in you and despite you.”

With the issue of abortion returned to the state level, the task at hand is to connect women facing challenging pregnancies with an array of supports, said OLF director Steven Bozza.

“This is the message we want to get out to everybody: we’re there for you,” said Bozza. “If you’re in a problem pregnancy, you don’t have to (go) through this alone.”

Along with such resources, pro-life advocates must “continue to tell the truth” about pre-born children, said Bishop Coffey.

“Lots of times, people say they want to follow the science for other things, and the science here is clear,” he said. “A ninth grader could understand this in biology class, how 23 chromosomes from the man and 23 from the woman come together. … At that moment, it’s a human life. … The day before his birth, is a baby any less a baby?”

Language surrounding the abortion debate has confused that reality, said Mass attendee Deb Mirenda, a member of the Philadelphia-area Life Runners chapter and of St. Joseph Parish in Downingtown.

“When people say ‘reproductive rights’ – once reproduction happens, that ends the conversation, because now we need a new conversation, one on the dignity of life and of another human being,” said Mirenda, who has five children.

A commitment to honesty is central to evangelization and discipleship, said Father Gill, citing a quote by Jesuit Father Daniel Berrigan on Servant of God Dorothy Day: “She lived the Gospel as if it were the truth.”

Christine and Daniel Grimm, on hand at the Mass with their two-month-old son Peter, said the reality of a newborn child deepens the awareness of the profound – and joyful — gift of life.

“Do not be afraid,” said Daniel Grimm.

Dr. Monique Ruberu, an obstetrician and gynecologist who has been a longtime prolife advocate, urged Mass attendees to invest both spiritually and practically in the lives of those facing crisis pregnancies.

In her post-Communion remarks, Ruberu said prayer intercessors, ultrasonographers, trade and business professionals — along with post-abortive women willing to share their stories of loss and healing — were all vital to the task of helping to “make abortion unthinkable.”

Now that the Dobbs decision has been issued, Mirenda believes that a greater respect for life will gradually take hold throughout the nation. 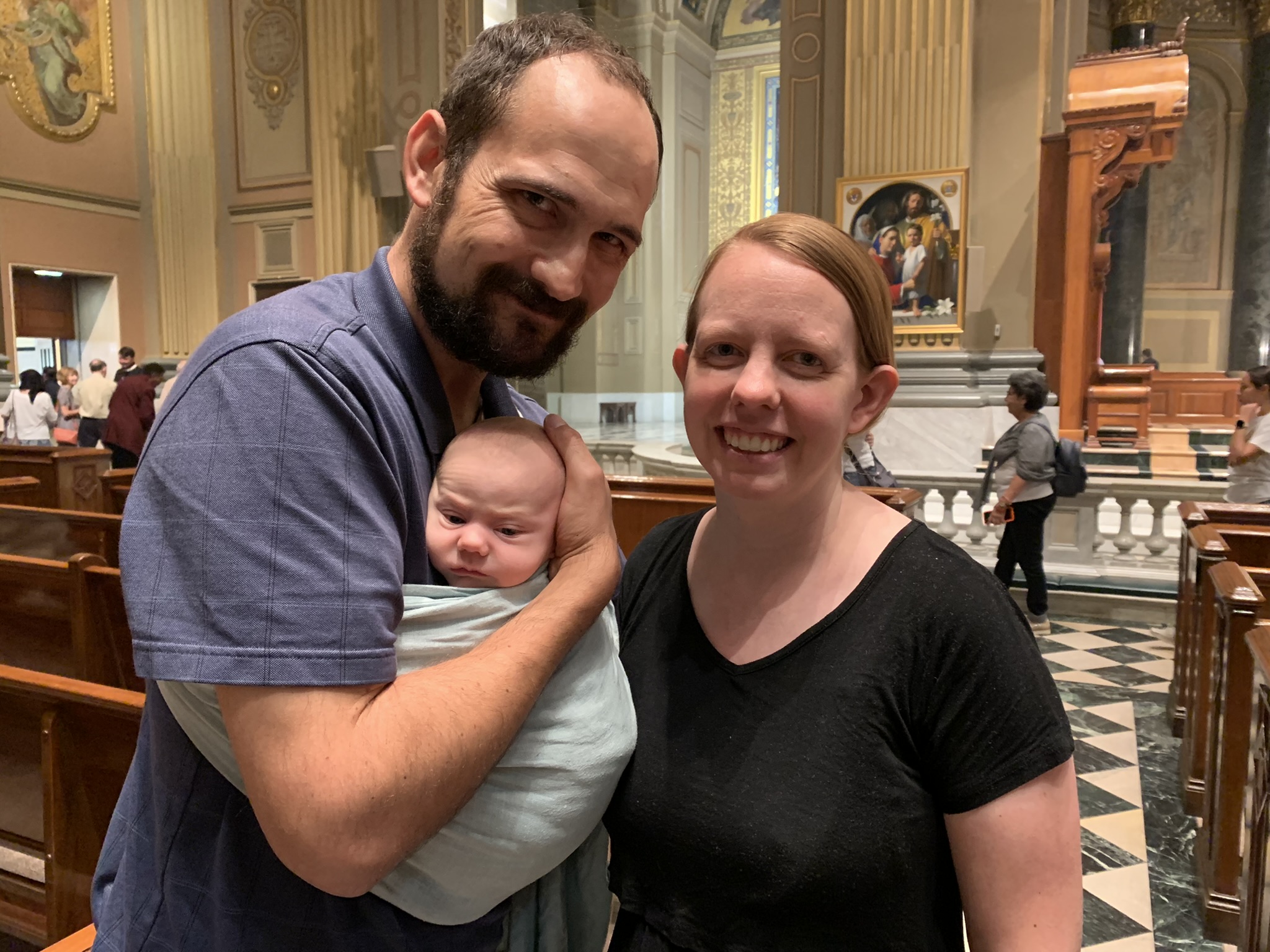 Two-month-old Peter Grimm and his parents Daniel and Christine joined faithful for a July 31 “Mass of Thanksgiving for the Gift of Human Life” celebrated by Archbishop Nelson Pérez at the Cathedral Basilica of SS. Peter and Paul. (Gina Christian)

NEXT: Book club finds heaven by journeying through Middle-earth