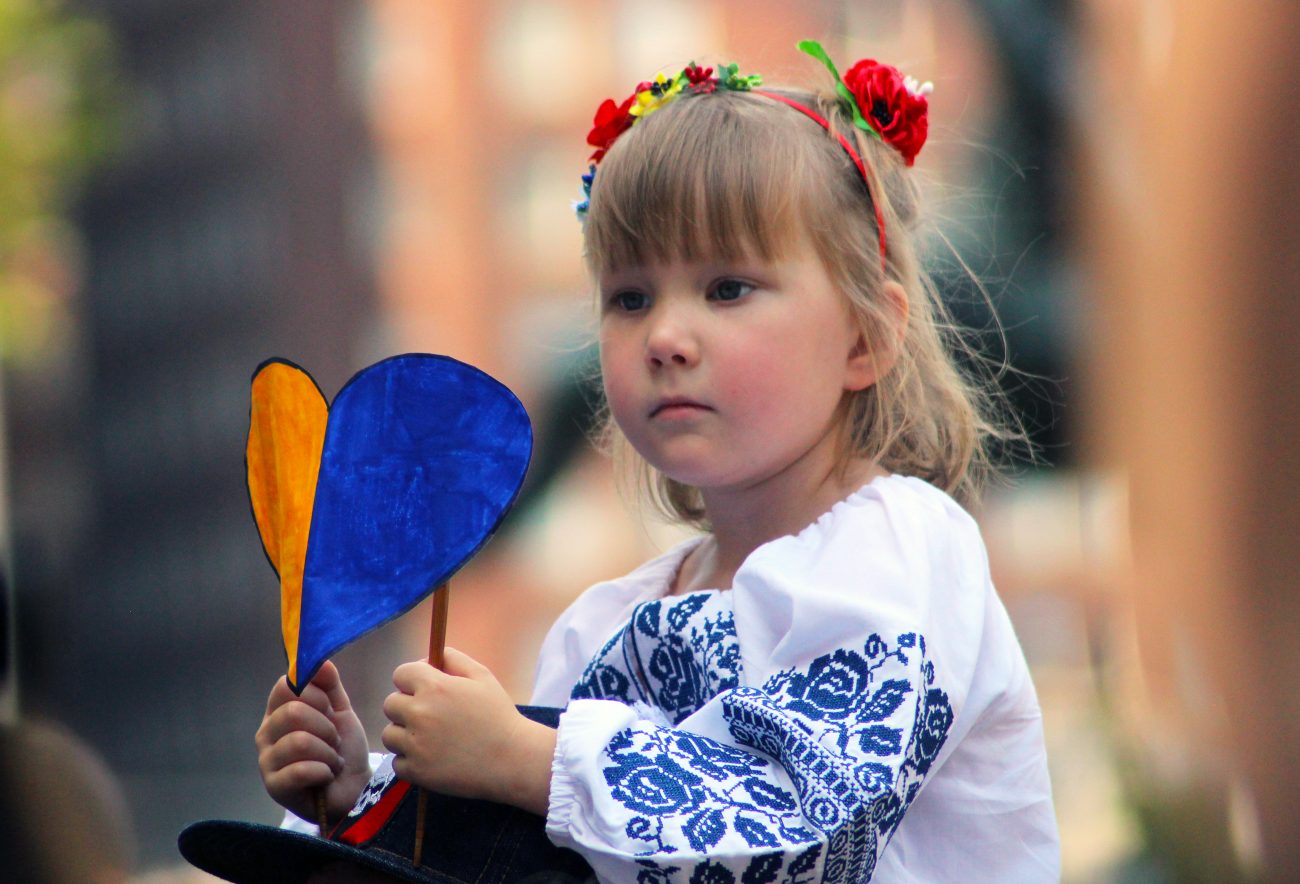 Ukrainian Catholics in the Philadelphia area marked Ukraine’s Independence Day with a mixture of pride, gratitude and grief – along with intense determination to preserve that nation’s freedom amid a brutal Russian invasion, now in its sixth month.

A second flag was unfurled by children, with attendees writing personalized messages of support for Ukraine, while Mazur announced that Ukraine’s President Volodymyr Zelensky has just been awarded the 2022 Liberty Medal by the National Constitution Center in Philadelphia.

A portrait of Zelensky by Native American artist Jeremy Salazar, commissioned by the Spirit of Liberty Foundation, was also unveiled at the event, with plans in the works to present it directly to Zelensky in the coming months.

Many in the crowd recalled their own memories of that day in 1991 when Ukraine declared its independence from the former Soviet Union.

“I was 10 years old,” said Mariana Karapinka, chief communications officer for the Ukrainian Catholic Archeparchy of Philadelphia. “I came into the kitchen in the morning, and my mom said, ‘Now we are free.’”

Though only 17 at the time, Father Roman Pitula, rector of the Ukrainian Catholic Cathedral of the Immaculate Conception in Philadelphia, said he experienced great “excitement” and “a feeling of satisfaction that … Ukraine had regained its independence as a sovereign country in Europe.”

That liberation also saw the reemergence of the Ukrainian Greek Catholic Church (UGCC), persecuted over the centuries and driven underground by the Soviet regime, he added.

Father Pitula stressed that Ukraine’s was a “renewed independence,” one with centuries-old roots. 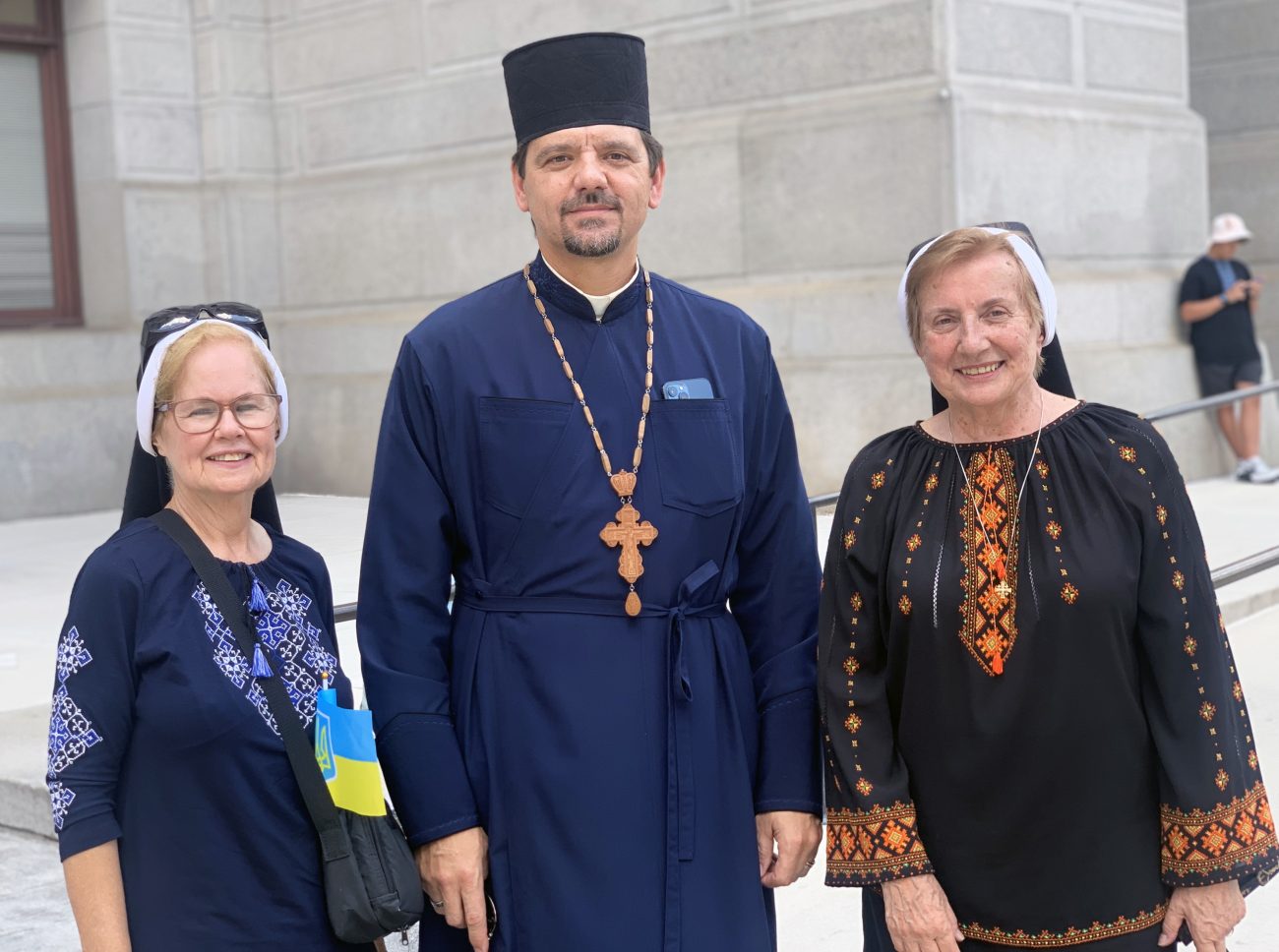 That heritage has been instilled not only in resident Ukrainians, but in the global Ukrainian community, said Nicholas Rudnytzky, professor of history and dean of academic services at Manor College in Jenkintown, a Catholic institution with deep ties to the Ukrainian-American community.

Speaking by telephone with CatholicPhilly.com Aug. 23, Rudnytzky — whose father Leo is a renowned Ukrainian literary scholar – said he and other “children of the diaspora had to know (their) history,” which was often learned both in the home and in classes hosted at parishes and centers of education, such as Manor.

Before and throughout the current invasion – which continues attacks launched by Russia in 2014 — Manor College has been a locus of multifaceted support for Ukraine, with president Jonathan Peri calling for “prayer and humanitarian action” as the nation commemorated its sovereignty.

As Russia continues to press its offensive in eastern Ukraine — and with its invasion already declared a genocide by several investigators — both spiritual and material assistance are more crucial than ever, said faithful. 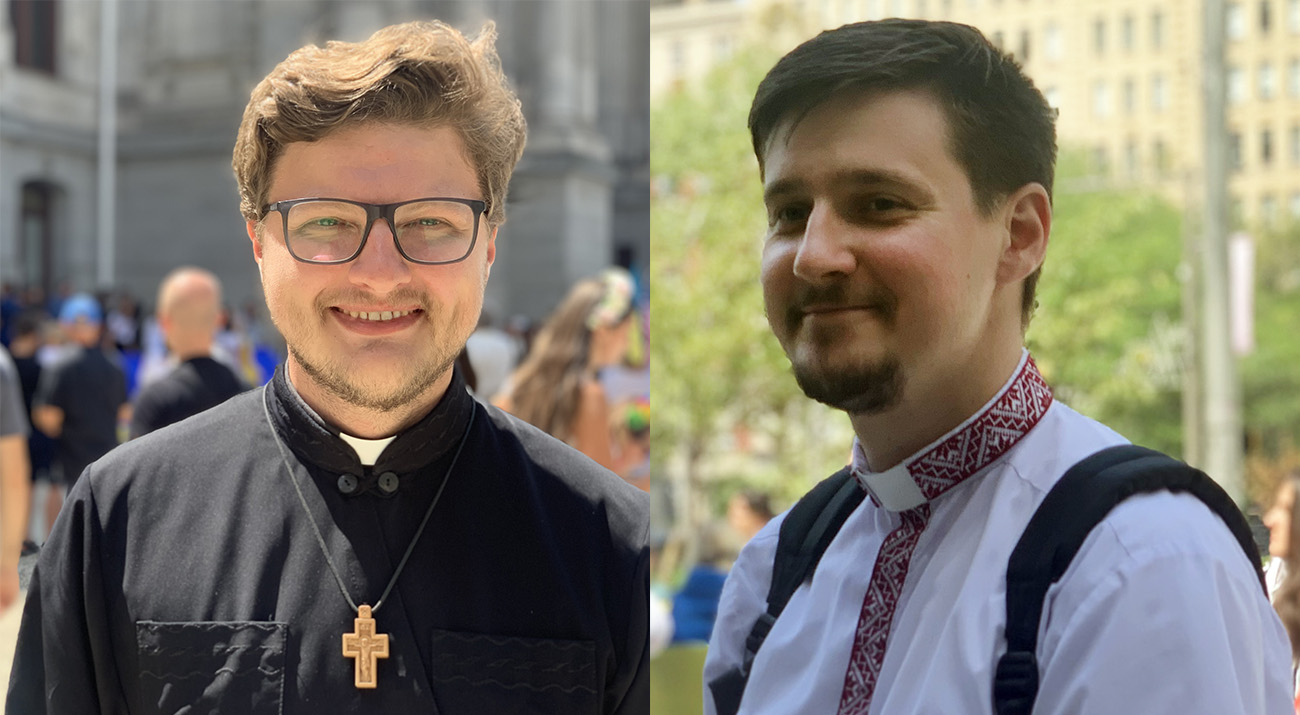 Father Ruslan Borovyi (left) and Father Volodymyr Radko of the Archeparchy of Philadelphia were on hand at an Aug. 24 commemoration of Ukraine’s Independence Day at Philadelphia’s City Hall. (CatholicPhilly.com composite photo/Gina Christian)

Father Volodymyr Radko of the Archeparchy of Philadelphia, ordained in Ukraine just 12 days before the current invasion, said although he was “grateful to God Ukraine is still standing,” his heart is “broken because there is still war.”

Hours before the City Hall ceremony, a Russian missile attack on a train station in the eastern town of Chaplyne killed 25, including an 11-year-old boy, and wounded some 50.

Father Radko said he found himself reliving “the emotions of being in Lviv on the morning of Feb. 24,” and the successive weeks he spent ministering to aid workers and sheltering during air raid sirens.

Basilian Sister Monica Lesnick, whose grandparents and parents were from Ukraine, fought back tears at the gathering.

“I want to celebrate, but I can’t even speak; I cry right away,” she said. “I’m worrying about the people there. I don’t even want to hear the news tonight because I’m afraid.”

She and Sister Ann noted several of their fellow sisters have chosen to remain in active conflict areas in Ukraine – including Zaporizhzhia, where Europe’s largest nuclear power plant is now occupied by Russian troops, with Ukrainian employees operating it at gunpoint and the plant sustaining shelling.

An inspection by the International Atomic Energy Agency, though planned, has yet to take place. Energoatom, the plant’s operator, said on its website the potential threat from the site “could be ten times greater than the scale of the Fukushima and Chernobyl disasters.”

On Aug. 25, fires at the plant led to its first-ever “complete disconnection … from the power grid,” according to Energoatom, which places the nuclear reactors at risk of a meltdown due to loss of power for cooling systems.

Ambassador Markarova said Ukraine’s independence “is a key to security and prosperity in Europe … and in the world.”

Faithful on hand agreed, adding that Ukraine’s struggles show “how fragile independence is,” said Karapinka. “Nations who have been independent for many centuries do not understand it as we do.”

Freedom itself “is a great gift of God,” said Father Ruslan Borovyi, pastor of St. Nicholas Ukrainian Catholic Church in Philadelphia. “At the same time, it is a responsibility, and that’s why we fight for our independence.”

Prayer is essential to that battle, said faithful.

“Our previous (UGCC) Patriarch Lubomyr Husar said if it wasn’t for monasticism and prayer, Ukraine wouldn’t have been free,” said Sister Ann. “I think the prayer of all the people … will be victorious for Ukraine.”

PREVIOUS: Ukraine is the ‘epicenter of global change,’ says archbishop

NEXT: Parish prays for Nicaraguan Catholics amid government crackdown