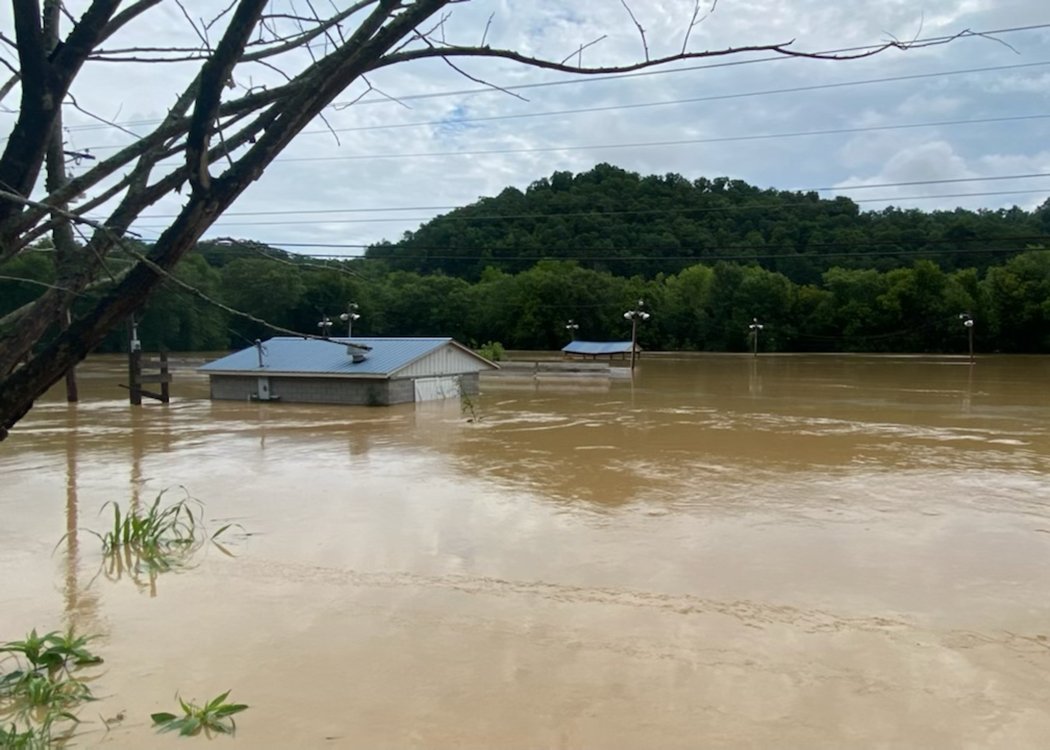 Floodwaters are seen in Jackson, Ky., July 28, 2022. Torrential rains fell late July 27 and into the next day in southeastern Kentucky, causing massive flooding that destroyed hundreds of homes and wiped out entire communities. Search and rescue teams, with the help of the National Guard, began searching for missing people July 29. More rain and storms were expected over the July 30-31 weekend. (CNS photo/Edward Bauer, Diocese of Lexington)

Lori Helfrich, the parish life director at Mother of Good Counsel Church in Hazard County, Kentucky, had just come from volunteering at the food pantry that her parish helps support.

They were cutting up melons to distribute to people hit hard by the torrential rain and flooding that has followed in the southeastern region of the state.

“Northfork Local Foods (the food pantry Hazard’s parish is part of) has a lot of melon and is distributing it so people have some fresh food,” Helfrich said in a mid-afternoon conference call July 29 arranged by the Diocese of Lexington, Kentucky.

“A lot of people don’t have water and electric. As community partners and churches, that’s what we’re working on — trying to connect people where we can,” she said.

The rains began late July 27 and went into the next day, causing massive flooding that destroyed hundreds of homes and wiped out entire communities, according to news reports.

Search and rescue teams, with the help of the National Guard, began searching for missing people July 29. As of Aug. 1, 660 air rescues and hundreds of boat rescues had been conducted.

Kentucky Gov. Andy Beshear called it “one of the worst, most devastating flooding events” in state history. He said President Joe Biden had approved his initial request for federal aid to assist with recovery efforts in 13 eastern Kentucky counties.

Beshear told reporters Aug. 1 that at least 30 people died, including four children. On NBC’s “Meet the Press,” he said he believes recovery crews will be “finding bodies for weeks.”

Later the same day, the governor said the toll had risen to 35.

Weather forecasters predicted a severe storm could hit the state again Aug. 1 and be followed throughout the week by “a dangerous heat wave,” according to CNN.

On the conference call, Helfrich said that besides Hazard County, which has a population of about 5,000, she has the most contact with Letcher, Knott, Perry, Owsley and Breathitt counties. Of the 65 Catholic families in Hazard, at least one family has lost everything, she said.

“Today the concentrated effort is on those who are still missing,” she said. A lot of the flooding came at night while people were sleeping. You compound the flooding with high poverty rates and you end up with the perfect storm.”

She said that debris in the flood water and the numbers of roads washed away are making it hard for first responders to reach people. And communication is spotty.

Afraid the Panbowl Dam in Jackson may break, officials closed a major road, blocking access to nearby communities.

Gauging the devastation based on how it has impacted Catholic families isn’t a good measure because they make up less than 1% of the population in Eastern Kentucky, according to Helfrich.

But the Catholic Church works closely with community partners and is an important part of the community.

“In some cases, like Campton, the Catholic Church has the only food pantry and they feed 300 people a month,” she said. “In Hazard, we have an emergency food pantry. We work with the housing development alliance. We work with community partners — that’s how it runs. Parishes work with partners to provide outreach.”

“People are very happy that we are checking in on people and they’ll get back to you when they can. Phone reception is very spotty,” she said. “(Of) the people I’ve talked to from the parish, one lady has been devastated, she has faced a lot of tough situations in her life and this is the worst. It’s kind of overwhelming in a sense.

“Our parish here in Hazard covers three counties — about 1,000 square miles: Leslie, Perry and Knott,” she said. “Many come from Letcher, too. Their whole town of Whitesburg was under water as of this morning. People are doing what they can; people are reaching out to each other. But people are in shock. They’re just in shock.”

Meg Campos, executive director of Catholic Charities of Lexington, who also was on the conference call, said: “People know they can turn to the Catholic Church.”

She said that “because of the magnitude of the disaster,” Catholic Charities USA has “reached out to me to see how we can collaborate.”

They offered to “bring on additional manpower from people who have disaster experience” and help identify Catholic parishes that can help with distribution, Campos said.

Next steps to be taken to include identifying a parish or parishes that are accessible and able to distribute materials, such as water, she said.

A day earlier Campos was on a conference call with 38 to 40 representatives of other faith-based agencies and a number of social service groups to begin sorting out the response that will be needed — short term and long term — to help the people of southeastern Kentucky.

“Right now we’re at that first stage, the information gathering phase” to identify the impact on counties and their communities and learn what parish life directors are “seeing on the ground,” she said in a July 28 phone interview with Catholic News Service.

The floods are worse than last year’s, “which were intense,” Campos added.

She said these conference calls with other agencies “will go on daily for the near future until the initial crisis subsides,” Campos said. “That’s always the short term — the cleanup, assessing the damage … getting everyone fed and temporarily housed. The long term, it turns into a recovery phase.”

“Long-term needs can go on for a year or so” and Catholic Charities will be there, she added.

On the July 29 conference call, Campos said that for those who want to donate to relief efforts, “cash is best.”

“Monetary donations are always the best way to help. We can purchase the needed items at any given time,” she explained, adding that some assistance “can be a burden” when items are donated that aren’t needed. There’s no place to store items either.

Those who wish to donate should go to catholiccharitieslexington.org, hit the tab “Donate Now” and designate contributions for disasters.

Helfrich said: “We’ll address whatever the next thing is we can do — whether that’s cut melon or text someone … and let them know they’re not alone.”

“It’s really hard,” she added. “Friends of ours lost their aunt and uncle, they couldn’t get out. One of our parishioners, her mom needed to be evacuated and lost her whole business. It’s very difficult for people.”

“So many people couldn’t get in touch with people in Perry County,” she said. “It’s hard when communication isn’t available to find out they’re OK.”

Emergency shelters have been set up at schools and as far as church services on Sunday, Helfrich said Hazard will likely have a Communion service, “but whether or not we will have Mass is up in the air.”

Right now the pastor can’t reach Mother of Good Counsel Church in Hazard, but the Catholic churches in Jackson and Campton churches are accessible.

“There’s a lot of hardship” in the region with its high unemployment rate and few job opportunities, Campos told CNS, “but there’s also this strength of the people that is so inspiring.”

“When I went and visited in last year’s floods and you would go to someone’s house and they’d say, ‘I’m sure someone else is worse off than me so don’t help me if others are worse off,'” she recalled.

One man who felt that way, she said, “sent us away with food from his garden. … That was the best watermelon I ever had.”

McAllister is editor of The Record, newspaper of the Archdiocese of Louisville. Contributing to this story was Julie Asher in Washington.

NEXT: Court: Catholic school has right to hire staff who uphold church doctrine