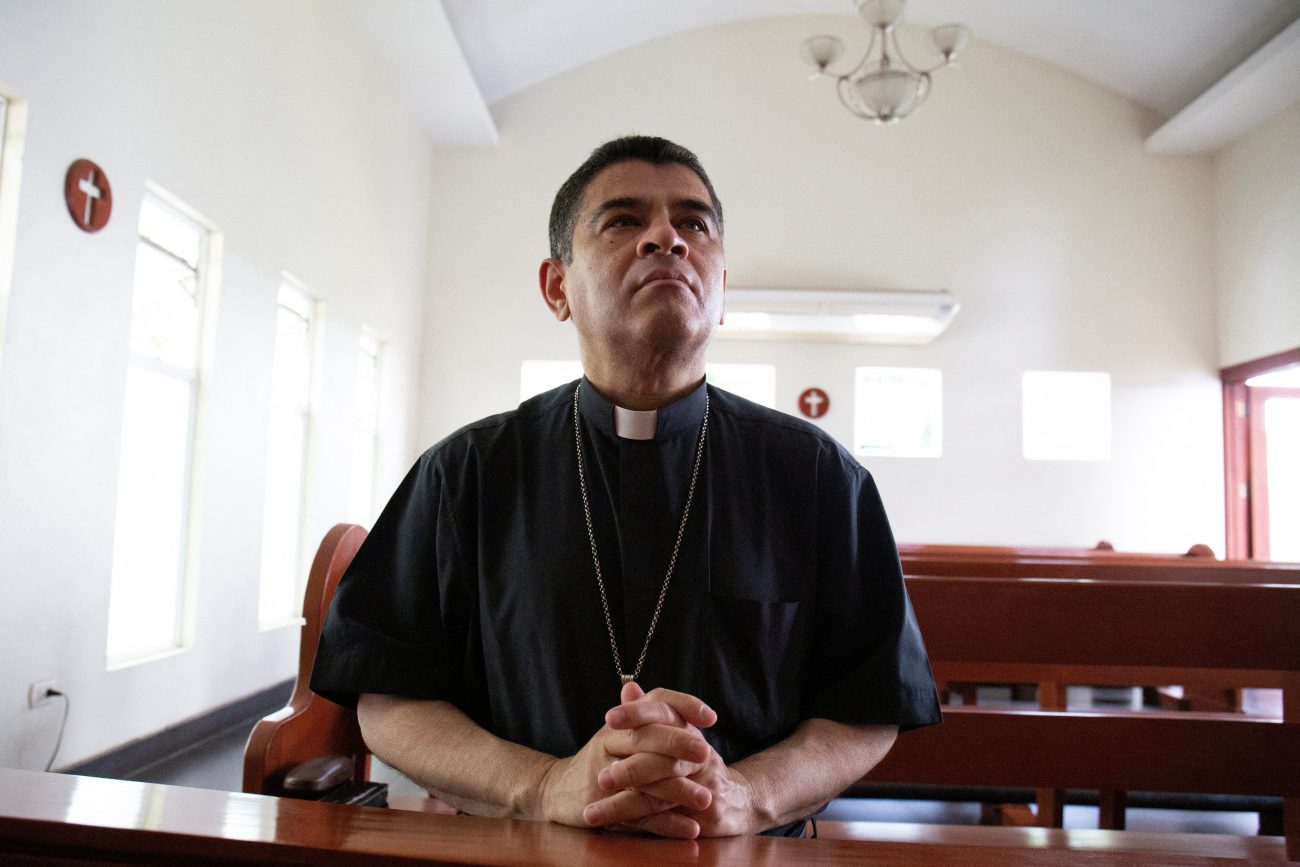 Bishop Rolando José Álvarez of Matagalpa, Nicaragua -- a frequent critic of Nicaraguan President Daniel Ortega -- prays at a Catholic church in Managua, Nicaragua, May 20, 2022. On Aug. 1 the bishop criticized what he described as a government crackdown on freedom of expression and religion. (CNS photo/Maynor Valenzuela, Reuters)

MEXICO CITY and WASHINGTON (CNS) — Nicaraguan authorities have ordered the closure of Catholic media outlets and raided a parish in the Diocese of Matagalpa, the latest attack on the Catholic Church by the Sandinista regime.

Police entered the Infant of Prague chapel in the community of Sébaco Aug. 1 to seize radio equipment, prompting parishioners to protest outside. Police rebuffed the protests and fired gunshots in the air as church bells rang, according to video posted to social media by the Divine Word parish. The parish also posted a video showing police taking away “young people from our Catholic groups.”

“We call on the national police to abandon our installations, which belong to the Catholic people,” the parish said in a Facebook message at 6 a.m. Aug. 2. A message earlier at 1:20 a.m. said the “police are removing the kitchen door to the parish residence.” Another message asked the Immaculate Heart of Mary for intervention.

Father Uriel Vallejos, pastor, posted photos of the police entering the chapel — breaking locks to do so. He also posted a letter from the authorities saying Radio Católica de Sébaco was operating without a valid license and “therefore operating illegally.”

In an Aug. 1 statement, the Diocese of Matagalpa said communications regulator TELCOR had ordered the closure of its Catholic radio station for similar reasons, saying it had operated without a valid license since 2003. The diocese disputed that claim, saying Bishop Rolando José Álvarez of Matagalpa “personally submitted documentation” to TELCOR in June 2016.

Bishop Álvarez and radio network personnel have been critical of Nicaraguan President Daniel Ortega and his wife, Vice President Rosario Murillo, whose administration has been treating the Catholic Church as an enemy, with priests arrested and media outlets closed. Catholic leaders have been cautious in the comments as the repression is ramped up and the regime targets church charitable and educational initiatives.

Without naming Bishop Álvarez, Murillo, speaking on a state TV program, called him a “buffoon,” and a “manipulator of religious symbols.”

“There are images that seem to come out of the absurd, images that reflect a manipulation of symbols that must remain sacred to everyone,” said Murillo.

“We will continue to report and denounce any situation that, like this one, continues violating the freedom of expression and religion in Nicaragua,” the diocesan statement said.

“We invite the people of God to continue praying,” the statement added, praying for the protection of priests Aug. 4, feast day of St. John Vianney, followed by a day of prayer and fasting Aug. 5, “because only prayer will save Nicaragua.”

The government ordered the Missionaries of Charity to leave the country in late June, alleging the order founded by St. Teresa of Kolkata “failed to comply with its obligations.” The sisters officially left Nicaragua July 6, crossing the border into neighboring Costa Rica.

Auxiliary Bishop Silvio José Baez of Managua is currently based in Miami due to safety concerns.

A Nicaraguan human rights organization released a video Aug. 4 showing police in riot gear outside the diocesan offices of Bishop Álvarez, preventing him from leaving to celebrate Mass at the cathedral.

Because the incident took place on a Thursday and Catholics were likely expecting him to show up for exposition and adoration of the Eucharist, he explained his absence in the video.

“I want to tell you that I’ve been wanting to head to the cathedral for holy hour, but obviously authorities haven’t given us permission,” Bishop Álvarez said in the video that shows the police blocking the door.

A second video shows him holding a monstrance with the Eucharist in a cordoned area of the street and a policeman preventing him from processing. The policeman whispered to him.

“You’re the ones who didn’t cooperate,” the bishop answered him, explaining that he was trying to do what is habitual for him on Thursdays, to expose the Eucharist and pray.

In the video, the bishop said police have not allowed him, along with six priests and six lay Catholics, to leave the diocesan offices.

“We will stay here without disrespecting the police,” the bishop said. Looking at the officers at his door, he said to them: “We’ve never disrespected you. These brothers, they have families, they are our friends.”

Then he blessed them.

But the bishop later appeared irritated when police would not allow him to pray, even in the street, as people began to gather near the besieged building.

“You’re the ones who didn’t allow in the priests, the choir, those who were going to transmit (eucharistic adoration),” he told them.

He blamed police for the chaos caused, for not allowing people to participate in the life of the church.

“Who are (the) ones responsible for the restlessness? Who has introduced this chaos?” the bishop asked.

“I was just preparing for adoration, for the Blessed Sacrament on this day of sanctification and protection for pastors,” he said referring to that day’s feast of St. John Vianney, patron of parish priests. “And look at what the police have done to the curia! So, obviously, people have come over there. I didn’t ask them to come, but the faithful people of God have come to pray because we believe in the power of prayer. We believe in the power of the Blessed Sacrament. We believe that Christ is alive!”

In an Aug. 5 Facebook post, the Diocese of Matagalpa posted a video almost 50 minutes in length, featuring what appeared to be Bishop Rolando Álvarez and several others, with a message they had “sung to Nicaragua and to our blessed God from the inside of our Matagalpse Episcopal Curia where we find ourselves restrained, but with inner strength and with joy and peace in the Lord.”

NEXT: Pope advances sainthood causes, including priest killed in Ukraine