Catholics ‘upbeat’ on Ukraine’s independence day, despite fear of attacks 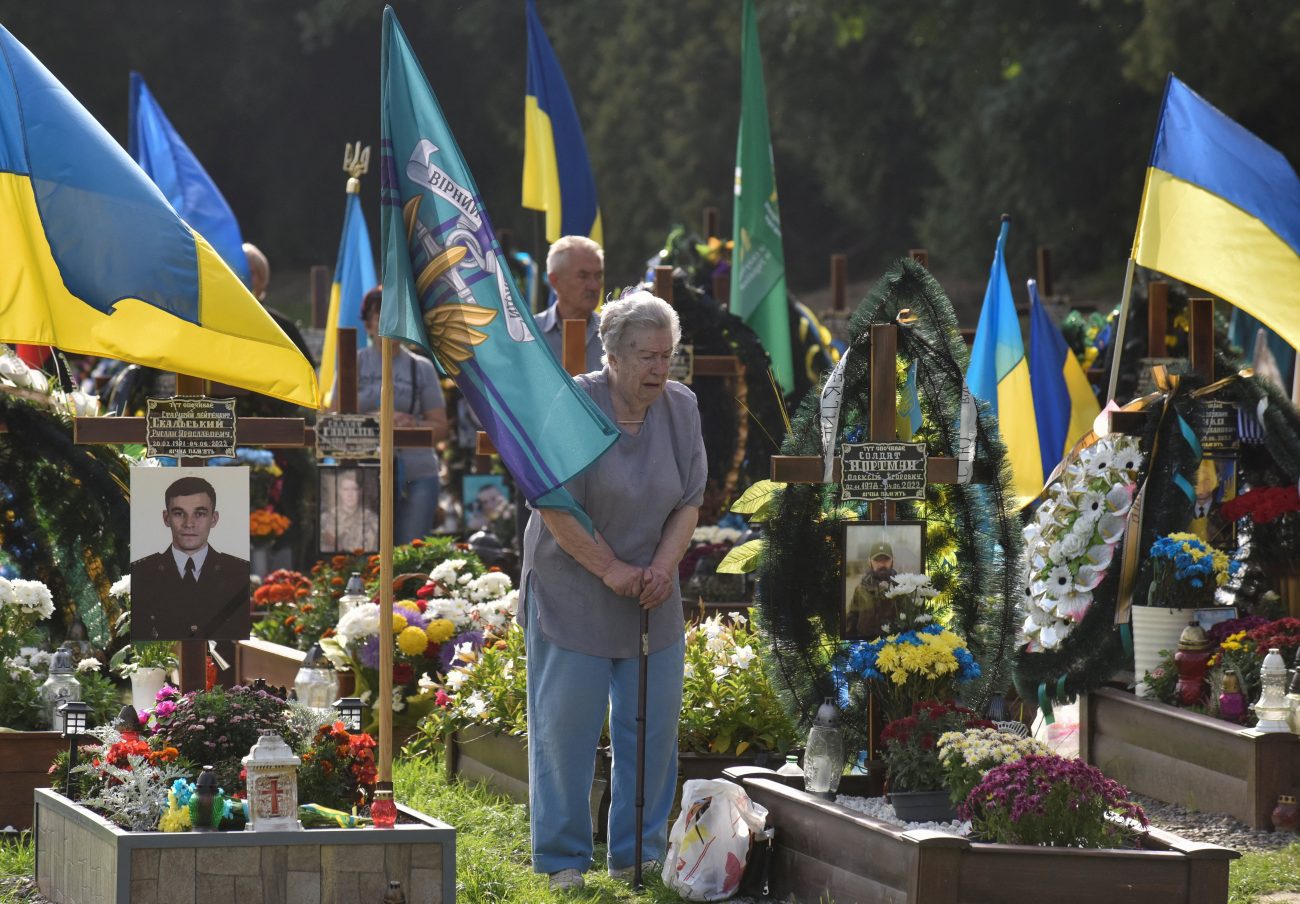 A woman mourns as she visits the tomb of her relative on Independence Day in Lviv, Ukraine, Aug. 24, 2022. The serviceman was killed in a fight against Russian troops. (CNS photo/Pavlo Palamarchuk, Reuters)

WARSAW, Poland (CNS) — Many of Ukraine’s Catholics remain “upbeat and determined” despite fears of intensified Russian attacks on Ukraine’s Independence Day, said a senior priest, who added that parish life was also continuing under tight surveillance in occupied areas.

“With martial law in force, festivities have been called off, so as not to court danger by gathering people together,” said Father Krzysztof Witwicki, chancellor of Ukraine’s Odesa-Simferopol Diocese.

“Yet the fact we’re still here, despite these terrible events, shows the church and its priests maintain faith in God. We’re giving spiritual support to those defending us, we remain upbeat and determined.”

The Odesa-based priest spoke to Catholic News Service amid warnings of Russian strikes against the port city and other population centers to disrupt Ukraine’s Aug. 24 Independence Day, which also marked six months since Russia’s Feb. 24 invasion.

Father Witwicki told CNS sirens and alarms had sounded overnight across Odesa, as nearby towns came under attack, but added that Catholics were “satisfied and grateful” that Europe and much of the world still “stood behind Ukraine” against Russia’s “wicked actions.”

“With the rockets and missiles still flying, Russia appears from media accounts to be preparing some ugly surprises,” Father Witwicki told CNS.

“But there’s optimism, hope and joy among people here, however much daily life has had to be pared back. Bridges of unity have been built from the beginning — and we count on the West to maintain its support in the hope we’ll all meet together in better times.”

President Volodymyr Zelenskyy warned the anniversary of Ukraine’s 1991 independence declaration could be marked by “hideous Russian provocations and brutal strikes,” but vowed in an Aug. 24 national message that the country would liberate its territories without “concession or compromise.”

Zelenskyy attended an ecumenical service with Catholic and Orthodox leaders in Kyiv’s St. Sophia Cathedral, after laying a wreath in memory of fallen Ukrainian soldiers at the capital’s Memory Wall.

In an Aug. 24 message, Ecumenical Patriarch Bartholomew I pledged “paternal love” for Ukrainians “defending their motherland from foreign invaders,” while Ukrainian Catholic Archbishop Sviatoslav Shevchuk of Kyiv-Halych thanked “all those supporting independent Ukraine, who stand in solidarity with us in our struggle.”

He added that Catholic churches had been wrecked by Russian shells in several cities, but said others remained intact “thanks to Divine Providence and local prayers.

“Although priests have been able to lead prayers and hear confessions in their churches, they’re regularly questioned by Russian officials and must be very careful what they say and do. Any remark, text or telephone conversation can endanger their own lives and those of people around them,” he told CNS.

Father Witwicki said the “great anger” aroused by the Aug. 20 car bomb death of Russian political commentator Darya Dugina had raised fears that revenge attacks could be ordered by Russian President Vladimir Putin, who claims Ukrainians are behind the killing.

However, he added that no one knew who was responsible for the killing, and he said Ukrainians found it “incomprehensible” that most Russian citizens were “merely keeping quiet, supporting their government’s actions and accepting its narrow way of thinking.”

“Russia unleashed this war against Ukraine without reason, and it doesn’t need any specific reason now for further attacks,” the chancellor said.

“But we know God has plans for us — Putin may send his rockets, but God will decide whether they strike. We must be optimistic and make sure we never leave our people when they most need help and support.”

Father Witwicki said the diocese had handed out rosaries to Catholic soldiers who attended Masses during breaks from the front, and he said that each evening, people attended church to pray for soldiers, civilians and children who had died in Odesa and other towns during the day.

PREVIOUS: Pope calls for end to horror, madness of war, on anniversary war in Ukraine

NEXT: Pope meeting off as Russian patriarch cancels visit to Kazakhstan