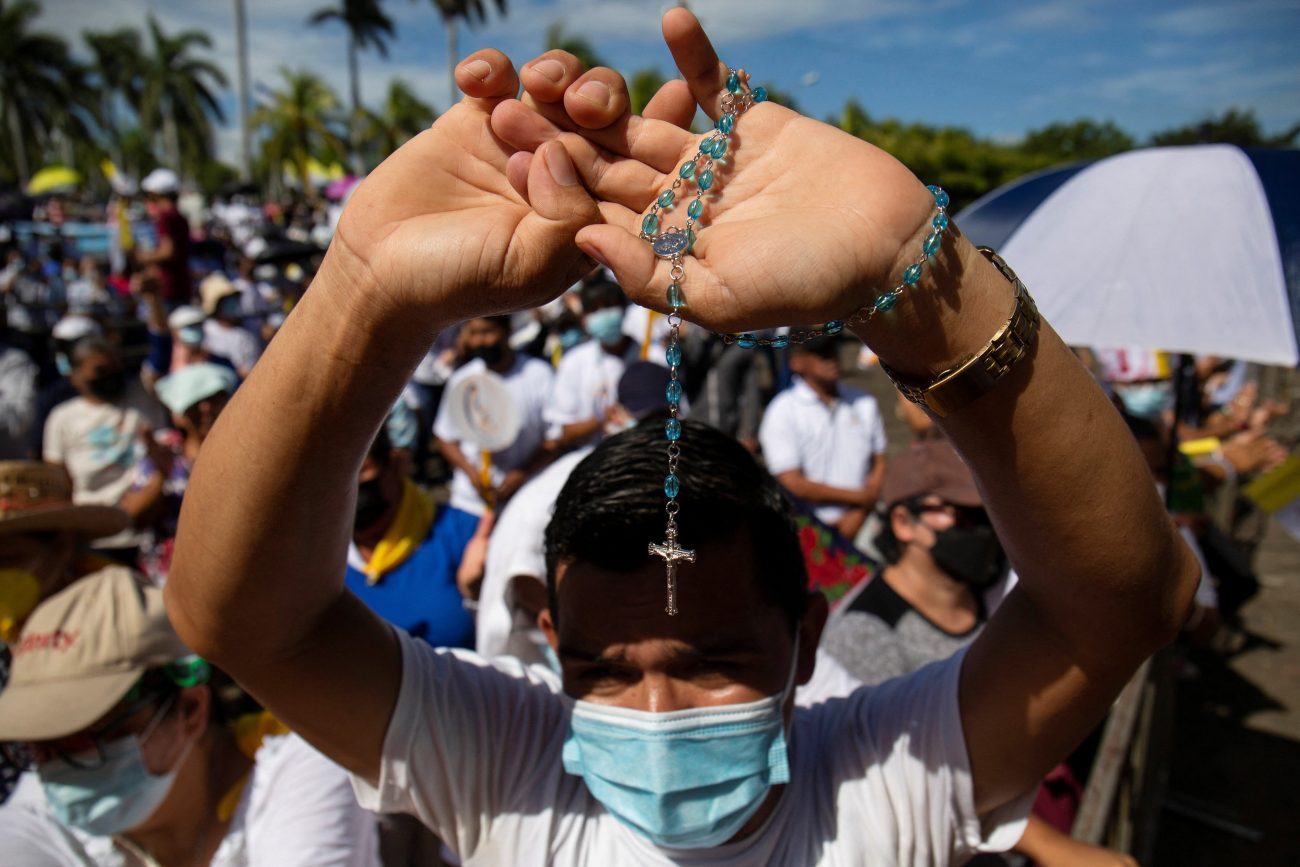 A pilgrim prays with a rosary during a Marian event in the atrium of the Metropolitan Cathedral in Managua, Nicaragua, Aug. 13, 2022, after police banned a Catholic procession and pilgrimage in the capital, citing security reasons. (CNS photo/Maynor Valenzuela, Reuters)

Three police patrols detained a Nicaraguan priest at his parish Aug. 14, in the latest instance of the government repression of the Catholic Church.

The same day, two other priests said they were stopped from going to the cathedral in Matagalpa for a Marian celebration.

A source told Catholic News Service the patrols stopped Father Oscar Benavidez as he was driving to celebrate Mass at a chapel in Mulukukú, and he was taken to the capital, Managua.

“We do not know the causes or reasons for his detention,” the Diocese of Siuna said in a statement the same day. “We expect the authorities to keep us informed.”

A source in Nicaraguan Catholic Church who knows Father Benavidez said the detained priest was from the Diocese of Matagalpa, though working in the Diocese of Siuna.

Bishop Rolando Álvarez of Matagalpa has been holed up in the diocesan curial offices since Aug. 4 with six priests and five lay Catholics, besieged by police.

“Father Oscar is paying the price for his innocence,” said the source, who requested anonymity for security reasons. “They’re going to invent lies with which to accuse him,” the source added. “One thinks that things are calming down and another wave of persecution hits us.”

The persecution of Catholic priests in Nicaragua has intensified as the regime of President Daniel Ortega portrays the church as a political enemy. Vice President Rosario Murillo, Ortega’s wife, has accused prelates of promoting “terrorist acts.”

The repression has halted church charitable and educational projects, and even Mother Teresa’s Missionaries of Charity have been expelled from the country. Government actions have hindered Catholics’ freedom of worship and interrupted processions and celebrations of the Eucharist.

A replica of Our Lady of Fatima has been taken to parishes throughout Nicaragua since arriving from Portugal in January 2020. The tour ended Aug. 13 in the capital, Managua, with images blessed by Cardinal Leopoldo Brenes of Managua sent to each of the country’s dioceses.

The Archdiocese of Managua said the National Police, citing “internal security” concerns, prohibited a procession for the sending off the replicas.

Father Erick Díaz, pastor of the St. Joseph the Worker Parish in the community El Tuma, planned to travel to the Matagalpa cathedral for the Aug. 14 celebration of the replica’s arrival. Father Díaz said via the parish Facebook page that police prohibited him from traveling and also turned around people wanting to attend the Marian celebration.

Another priest in the Diocese of Matagalpa, Father Fernando Calero, said via social media that he was prevented from traveling to the Matagalpa Cathedral; police retained his driver’s license and documents for operating a vehicle.

Media reports showed an overflow crowd for the arrival of the Fatima image at the Matagalpa Cathedral.

NEXT: Pope says not enough evidence to try cardinal for sexual assault