Pope: Religions must be purified of extremism, self-righteousness 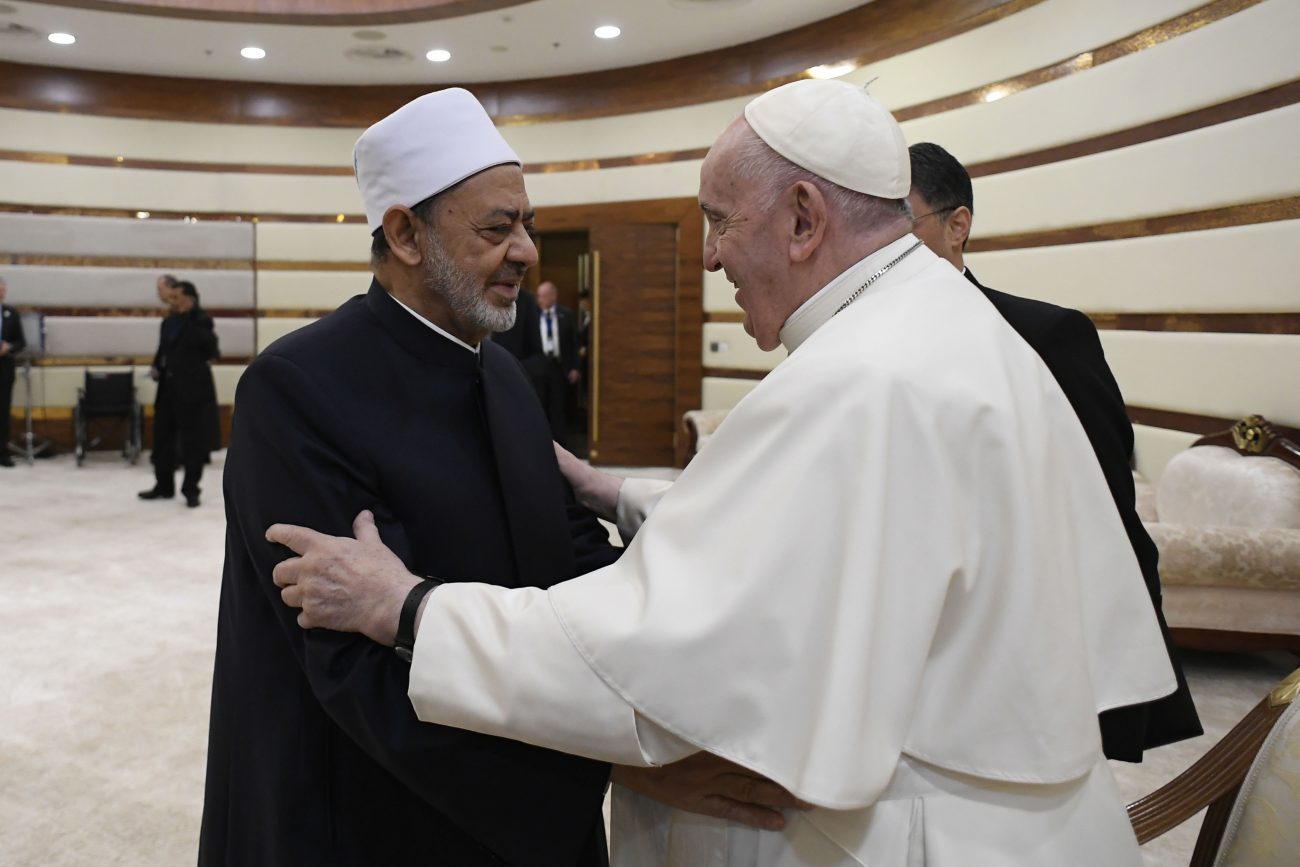 Pope Francis greets Sheikh Ahmad el-Tayeb, grand imam of Egypt's Al-Azhar mosque and university, during the Congress of Leaders of World and Traditional Religions at the Palace of Peace and Reconciliation in Nur-Sultan, Kazakhstan, Sept. 14, 2022. (CNS photo/Vatican Media)

NUR-SULTAN, Kazakhstan (CNS) — As war, violence and extremism in countries around the world threaten the lives of countless men, women and children, religions must rise above differences and be examples of peace and harmony, Pope Francis said.

“It is time to realize that fundamentalism defiles and corrupts every creed; time for open and compassionate hearts,” the pope said Sept. 14 at the plenary session of the Congress of Leaders of World and Traditional Religions.

“We need religion in order to respond to the thirst for world peace and the thirst for the infinite that dwells in the heart of each man and woman,” he said.

On the second day of his visit to Kazakhstan, the pope addressed 80 religious leaders and hundreds of delegates participating in the interreligious meeting Sept. 14-15 in the Palace of Independence, a blue-glassed trapezoid-shaped building in the heart of the Kazakh capital, Nur-Sultan.

The congress, which is held every three years, was the initiative of Kazakhstan’s first president, Nursultan Nazarbayev, as a way of promoting dialogue among religions, the congress’ website stated. It also aims to prevent “the use of religious feelings of people for the escalation of conflicts and hostilities.”

Arriving at the meeting, the pope took his place at a huge round table with the other leaders and was immediately greeted by Sheikh Ahmad el-Tayeb, grand imam of Al-Azhar in Egypt. Smiling, the pope affectionately embraced him.

The event began with a moment of silent prayer.

After the formal session, Pope Francis held private meetings with a dozen of the leaders, including the sheikh, but also with Metropolitan Anthony of Volokolamsk, head of external relations for the Russian Orthodox Church. The metropolitan took the place of Russian Patriarch Kirill of Moscow, who canceled his attendance at the congress.

Metropolitan Anthony told reporters his 15-minute meeting with the pope was “very cordial” and that the pope had asked him to pass his greetings to the patriarch, whom the pope had hoped to meet in Nur-Sultan. The patriarch’s withdrawal from the congress was seen by many observers as a protest of Pope Francis’ decision not to meet Patriarch Kirill in Jerusalem in June because of Russia’s invasion of Ukraine and of Patriarch Kirill’s support for the war.

“We had worked to prepare the second meeting (between a pope and patriarch — the first was in Havana in 2016), and then it was canceled by the Vatican,” Metropolitan Anthony told reporters at the Palace of Independence. “We’ll see what we can do” to arrange a new meeting time.

Asked if Patriarch Kirill was still bothered by Pope Francis’ comment in May to an Italian newspaper that “the patriarch cannot turn himself into Putin’s altar boy,” the metropolitan said, “I can say it was something very unexpected, this interview, and it is clear that expressions of this kind are not helpful for Christian unity.”

In his formal talk to the congress, Pope Francis said that “authentic religiosity” is needed to fight fundamentalism and extremism in religion and to show the world that it has no reason to distrust or have “contempt for religion as if it were a destabilizing force in modern society.”

Kazakhstan and other nations of the former Soviet Union “are all too familiar with the legacy of decades of state-imposed atheism: that oppressive and stifling mentality for which the mere mention of the word ‘religion’ was greeted with embarrassed silence,” the pope said.

Religion, he said, “is not a problem, but part of the solution for a more harmonious life in society.”

Focusing on the meeting’s theme, which reflected on the role of religious leaders “in the spiritual and social development of mankind in the post-pandemic period,” Pope Francis said the COVID-19 pandemic was among several challenges that “call all of us — and in a special way the religions — to greater unity of purpose.”

“COVID-19 put us all in the same boat,” he said. “All of us felt vulnerable, all of us in need of help, none of us completely independent, none completely self-sufficient.”

Now, he said, religions must not squander “the sense of solidarity” or act as “if nothing happened.”

Instead, the pope said, religious leaders must confront the urgent needs of the world and be “promoters of unity amid the grave challenges that risk dividing our human family even further.”

With the world “plagued by the scourge of war, by a climate of hostility and confrontation, by an inability to step back and hold out a hand to the other,” he said, it is time for religions to purify themselves from evil, particularly the “presumption of feeling self-righteous, with no need to learn anything from anyone.”

“Let us free ourselves of those reductive and destructive notions that offend the name of God by harshness, extremism and forms of fundamentalism, and profane it through hatred, fanaticism and terrorism, disfiguring the image of man as well,” he said.

“And let us learn also to be ashamed: yes, to experience that healthy shame born of compassion for those who suffer, sympathy and concern for their condition and for their fate, which we realize that we too share,” he said.

NEXT: Pope urges world leaders to ‘work for peace, not weapons’