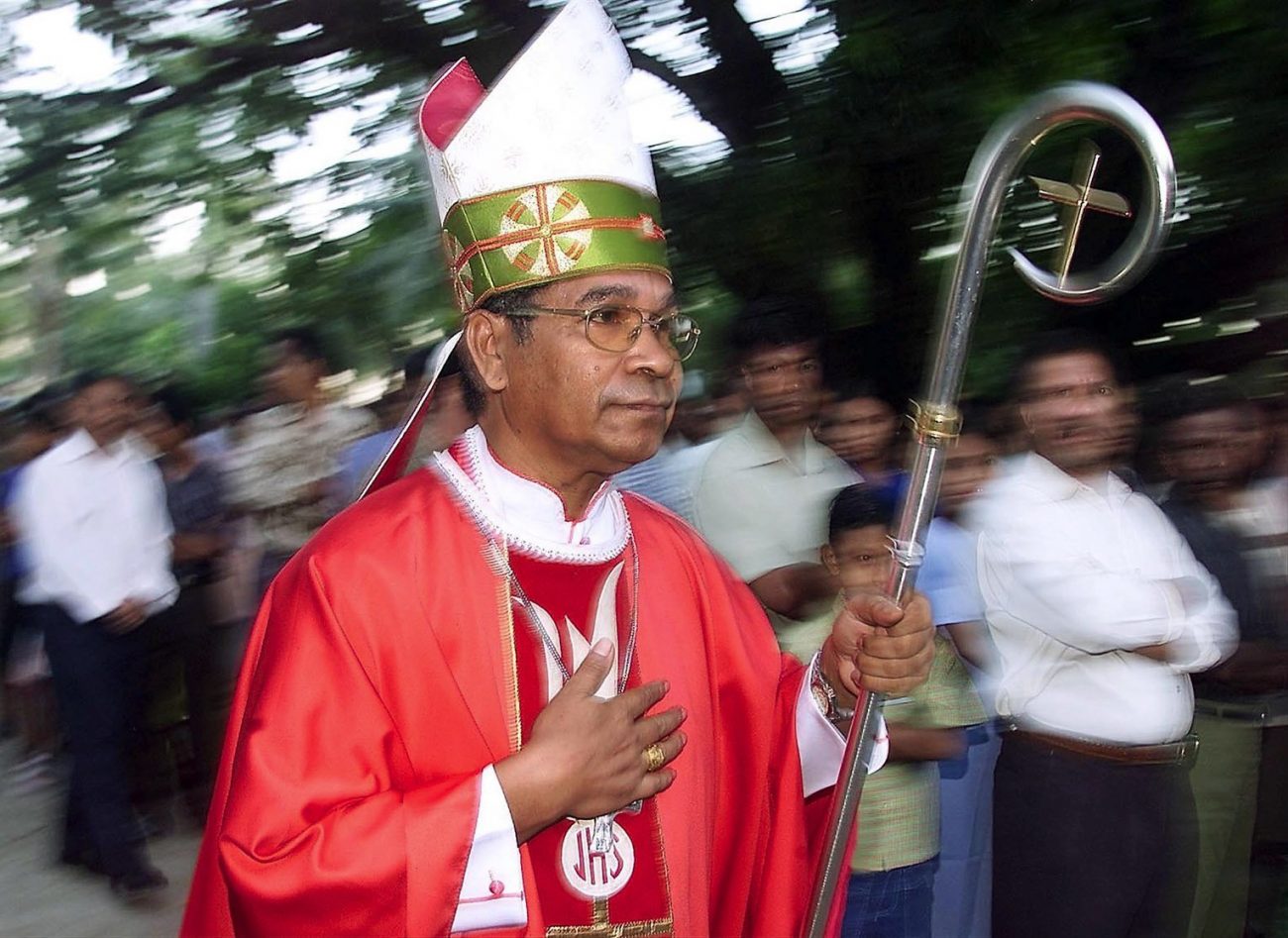 East Timorese Bishop Carlos Filipe Ximenes Belo arrives for an outdoor Mass in Dili May 19, 2002, the day before East Timor officially became an independent nation. Bishop Belo, now retired, left East Timor in 2002, saying he was suffering "from both physical and mental fatigue." He retired to missionary life in another former Portuguese colony, Mozambique, before eventually settling in Portugal. (CNS photo/Darren Whiteside, Reuters)

DILI, East Timor (CNS) — After a Dutch newspaper published an investigation into abuse allegations against retired Bishop Carlos Filipe Ximenes Belo of Dili, the Vatican said it had become aware of the allegations several years ago and placed restrictions on him.

The newspaper De Groene Amsterdammer said it began its investigation in 2002. It used the first-person stories of two young men, then aged 14 and 16, who graphically detailed their interactions with Bishop Belo, claiming that he gave them money after certain physical encounters.

“He knows that the boys have no money. So when he invited you, you came over and (he) gave you some money,” one of the alleged victims was quoted as saying. “But meanwhile, you are a victim. That’s the way he did.”

“From the research carried out by De Groene, it appears Belo had more victims,” the story said. “De Groene spoke with 20 people with knowledge of the case: dignitaries, government officials, politicians, NGO workers, people from the church and professionals. More than half of them personally know a victim, while others know about the case, and most discussed it at work. De Groene also spoke with other victims who didn’t want to tell their story in the media.”

At the Vatican, Matteo Bruni, director of the Vatican press office, told reporters Sept. 29 that “the Congregation for the Doctrine of (the) Faith was first involved in this case in 2019, and in the light of the accusations it received concerning the bishop’s behavior, in September 2020 the congregation imposed certain disciplinary restrictions upon him. The restrictions included limitations to his movements and to the exercise of his ministry, the prohibition of voluntary contact with minors, of interviews and contacts with Timor Leste.

Bishop Belo, now 74, won the Nobel Peace Prize in 1996 for nonviolent resistance to Indonesia’s 24-year occupation of his homeland; he shared the prize with current East Timor President José Ramos-Horta.

Bishop Belo left East Timor in 2002, saying he was suffering “from both physical and mental fatigue.” He retired to missionary life in another former Portuguese colony, Mozambique, before eventually settling in Portugal.

The bishop was ordained as a Salesian priest, and he has been staying with Salesians in Portugal. On Sept. 29, the Salesians in Portugal issued a statement saying they were sad and perplexed to hear the allegations against the bishop, who “has had no educational or pastoral responsibilities at the service of our congregation” since his arrival.

“His request for hospitality was accepted by us as a matter of course because he is a person known and esteemed by all,” the Salesians said.

“We have no knowledge of the content of the news to make any pronouncements,” they added.

East Timor is already struggling to come to terms with the case of former U.S. cleric Richard Daschbach, 85, who abused dozens of young people and vulnerable adults in an orphanage he ran in a remote part of the tiny Asian nation. A member of the Society of the Divine Word, he was expelled from the priesthood after an investigation by Rome in 2018 and jailed after a criminal trial in 2021.

“As a Catholic country, with more than 90% adherence, the church wields enormous social, political and spiritual power, and priests are revered as God on earth. Daschbach was treated as a ‘demigod’ with ‘magical abilities’ and a direct line to Christ,” Sara Niner, a professor at Australia’s Monash University, wrote in 2021.