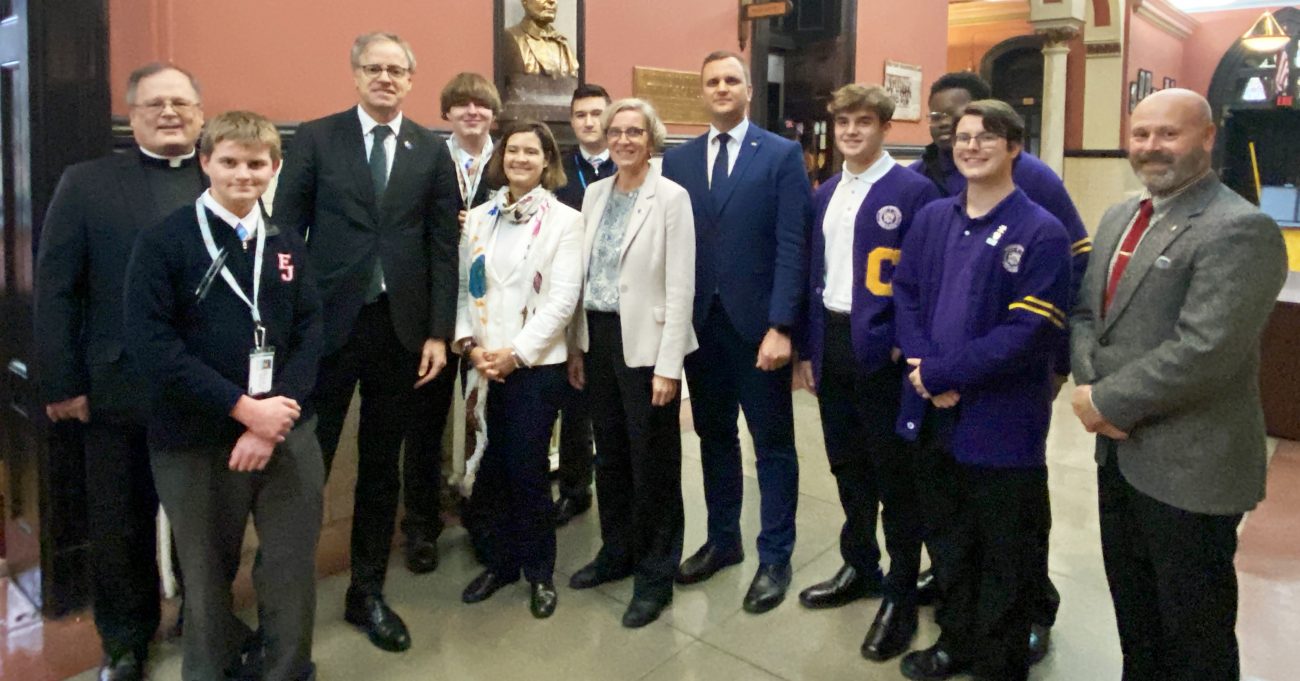 Students at two archdiocesan high schools recently sat down with several European diplomats to discuss democracy and unity amid Russia’s invasion of Ukraine.

On Oct. 3, some 40 juniors and seniors from Roman Catholic and Father Judge High Schools gathered for “Transatlantic Democracy in Times of Challenge,” a panel discussion with the Deputy Ambassadors of Germany, Axel Dittman; Portugal, Alexandra Bilreiro; Sweden, Ingrid Ask; and Latvia, Jānis Beķeris.

The event, which took place at Roman Catholic, was organized by that school’s advancement coordinator, Miguel Hurtado, who said he wanted to show the students “what’s at stake in the world right now.”

A former staffer for Delaware Governor John Carney, Hurtado – a Catholic school graduate himself – drew on his previous acquaintance with the deputy ambassadors to invite them to speak.

Their insights are more valuable than ever, especially for teens beginning to participate in the political process, said Hurtado.

“I want these students to understand that American democracy is not a guarantee,” he said. “Democracies can and do die, and they are dying now.”

Prior to the end of her term in August, Bachelet noted that “the democratic gains of the last 30 years have been greatly reduced,” rendering “democracy enjoyed globally by the average person … down to 1989 levels.”

The slide towards authoritarianism “is especially evident in Central Asia, Eastern Europe … Asia Pacific … and parts of Latin America and the Caribbean,” said Bachelet, citing attacks on electoral bodies, courts, media and human rights institutions among the contributing factors.

Russia’s full-scale invasion of Ukraine – which continues eight years of attacks launched in 2014 – has revealed both the strength of democracy and the long-term work required to sustain it, said Hurtado.

“Putin’s big game was to fracture the West, and as it turns out, the West has been incredibly united in its rejection of the Russian attack,” said Hurtado.

Such cohesion among “27 European Union nations, Canada, the U.S. and Australia … is not something that happens overnight,” he said. “I wanted the students to get a first-hand account from the diplomats of how that was possible.”

At the same time, the war – for which charges of genocide and crimes against humanity have been filed in the International Court of Justice – serves as a warning to safeguard democracy, said Hurtado.

He said his own faith inspires him to encourage students to consider democracy’s impact “not just in Philadelphia or Pennsylvania, but in the world.”

PREVIOUS: On pilgrimage, Mary is the tour guide to deeper relationship with Jesus

NEXT: Migrants, refugees key to building the kingdom of God, says bishop