On pilgrimage, Mary is the tour guide to deeper relationship with Jesus 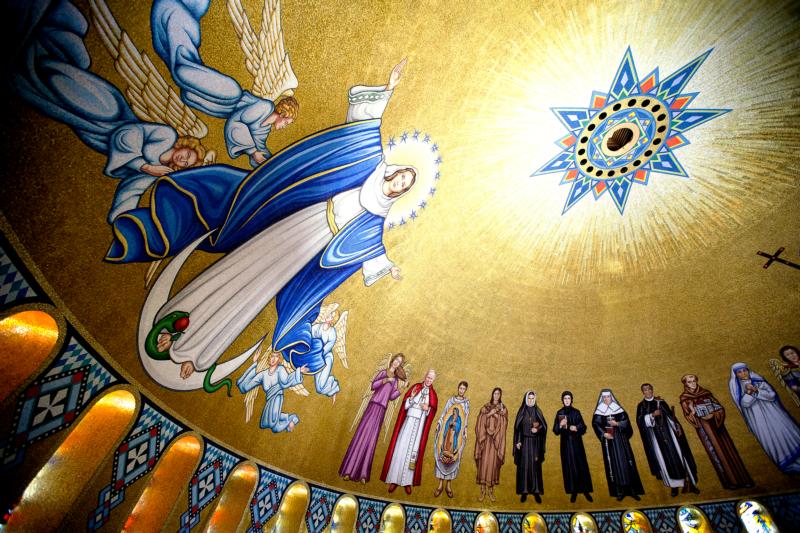 Hundreds of area faithful are preparing to travel to the nation’s capital this weekend, with Mary as the tour guide to a deeper relationship with Christ.

The Archdiocese of Philadelphia will host an Oct. 15 pilgrimage to the Basilica of the National Shrine of the Immaculate Conception in Washington, D.C.

The day-long gathering, sponsored by the Office for Divine Worship and the Cathedral Basilica of SS. Peter and Paul, will be led by Archbishop Nelson Pérez, principal celebrant and homilist of the event’s 2:30 p.m. Mass in honor of Our Lady of the Most Blessed Sacrament.

Prior to the liturgy, pilgrims will join in communal prayer at 11 a.m., followed by a recitation of the rosary, confessions, eucharistic adoration and a procession and crowning of a statue of Mary.

The pilgrimage’s theme highlights the profound connection between Mary and the Real Presence of Christ in the Eucharist, said Father Dennis Gill, cathedral rector and director of the Office for Divine Worship.

“Mary’s holy womb is the original tabernacle for the Word made flesh, which for us today is the Most Blessed Sacrament,” he said. “We ask Mary to give a deeper faith in her divine Son’s presence to us in his holy Body and Blood.”

The focus dovetails with the recently launched National Eucharistic Revival, a three-year effort by the U.S. Catholic bishops to reawaken belief in and devotion to the Real Presence.

That belief, central to the Catholic faith, has waned considerably in recent decades. A 2019 study by the Pew Research Center found that only about one third (31%) of Catholics in the U.S. said they believed in transubstantiation, the change whereby the bread and wine at Mass, having been consecrated, become the Body and Blood of Christ.

An overwhelming majority (69%) of those surveyed said the bread and wine merely symbolized Christ. Most of those respondents did not in fact know transubstantiation was actually church teaching. Of those aware of the doctrine, 22% nonetheless rejected the idea.

Mary can counter such trends, since she serves as “a model who bore God himself, that we may do so as well with faith and devotion every time we receive holy Communion,” said Father Gill.

The pilgrimage, as a “sacramental and deeply spiritual occasion,” can rekindle fervor in the faithful, he added.

The effort of traveling to the basilica signals “our ever-present movement with Christ, who is the Way to eternal life,” said Father Gill.

Once there, “we are provided the opportunity for communion with Christ, especially with the celebration of the sacraments,” he said.

The journey can help reassure pilgrims of the Lord’s closeness in their day-to-day lives, Father Gill added.

“I hope and pray the participants will a great sense of the power of Jesus at work in their Christian lives, and the nearness of Mary to them in her prayers,” he said.

For detailed information on the Archdiocese of Philadelphia’s 2022 pilgrimage, visit the event website or view the flyer.

NEXT: Students meet with EU diplomats to learn ‘what’s at stake’ with democracy