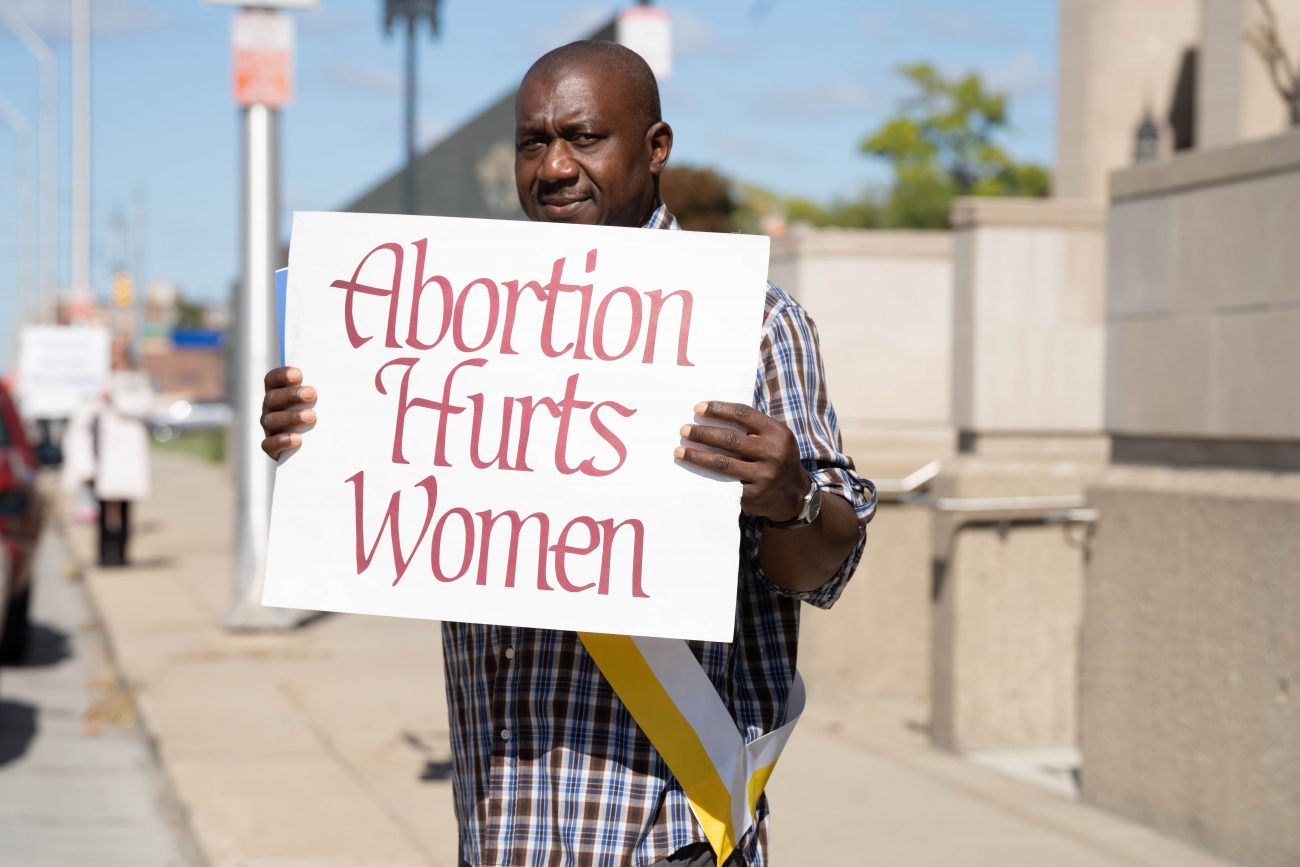 A man holds a sign while participating in a "Life Chain" outside the Cathedral of the Most Blessed Sacrament in Detroit on Respect Life Sunday Oct. 2, 2022. (CNS photo/Valaurian Waller, Detroit Catholic)

The bishops of Michigan’s seven Catholic dioceses are urging voters to reject Proposal 3, which they warn is “the most extreme proposal concerning abortion this state or country has ever seen.”

Proposal 3, also known as the “Reproductive Freedom for All” amendment, would amend the state’s constitution to remove virtually all restrictions on abortion in the state and eliminate a host of other pro-life laws.

“As citizens and pastors in Michigan, we call your attention to an immense threat to the dignity of human life on this November’s ballot,” the bishops said in a joint statement released through the Michigan Catholic Conference in Lansing and mailed Oct. 10 to approximately 236,000 Catholic households throughout the state.

“We urge you to vote no,” they said in the letter sent to registered parishioners in each of the state’s seven dioceses.

As a constitutional amendment, the passage of Proposal 3 would require a simple majority of voters Nov. 8.

If passed, it would override virtually all pro-life laws in the state, the bishops warned, including laws requiring parental notification for teenagers seeking abortion; laws requiring cleanliness and safety standards for abortion clinics; and laws requiring abortion providers to be licensed medical professionals.

Such far-reaching consequences make Proposal 3 the most dangerous piece of legislation concerning abortion ever proposed in the United States, the bishops said.

“Let us be clear: If Proposal 3 passes, there would be no real limits on abortion or sterilization procedures in Michigan, outside of an individual’s voluntary consent,” the bishops wrote in the letter, published in both English and Spanish. “And no matter how one feels about abortion, this proposed amendment goes well beyond what was allowed under Roe v. Wade.”

Among other measures, the passage of Proposal 3 would eliminate Michigan’s ban on partial-birth abortion, a gruesome and medically unnecessary procedure in which a baby is aborted during the birth process. It also would change state laws regarding drugs that could be administered to minors without parental consent, the bishops said.

“Because the amendment also extends the ‘right to sterilization’ to any individual regardless of age, a minor would be allowed to seek sterilizing drugs or gender-changing procedures, in addition to abortion, without parental knowledge or consent,” the bishops wrote.

Critics have challenged the proposal’s wording, which they contend was written haphazardly and vaguely to conceal a broader interpretation of its meaning, but ultimately the Michigan Supreme Court ordered the proposal to appear on the Nov. 8 ballot, despite flaws in the text.

Only a summary of the full proposal will appear on the Nov. 8 ballot, leaving the full scope of the proposal unclear to casual voters, the bishops warned.

“We urge you to read the proposed amendment and focus on the language,” the bishops wrote. “Words matter, particularly as they relate to constitutional amendments. Visit www.micatholic.org/Proposal3 for more information and to read the proposal.”

In addition to defeating Proposal 3, the bishops added, it is imperative for the church to continue to support women and families facing unexpected pregnancies, such as through initiatives such as “Walking with Moms in Need.”

“We cannot create a world where abortion is unthinkable without also creating a world in which all families receive the support they need,” they wrote.

“With prayer, compassion and material support, the Catholic Church — through its agencies and lay faithful — must be willing to walk with women in need to support them, their children, and their families — before, during and after pregnancy,” they added.

Priests, parishes and Catholic organizations throughout the state have been among the most vocal in urging voters to reject the Proposal 3.

Although churches may not campaign for specific candidates or parties, nothing in existing state or federal law prohibits churches from supporting or opposing ballot measures.

A campaign spearheaded by the Michigan Catholic Conference, called “Fight Like Heaven: Vote No on Extreme Proposal 3,” contains a host of articles, prayer cards, television ads and frequently asked questions about the proposal in an effort to educate voters ahead of the election.

The name is a reference to Michigan Gov. Gretchen Whitmer’s promise to “fight like hell” to support abortion in the state after the fall of Roe v. Wade.

“As bishops and teachers of the Catholic faith, we continually proclaim that all human life is sacred and a gift from God,” the bishops wrote. “The teachings of our faith regard the dignity of human life as the foundation of a moral society and the right to life as the fundamental right upon which all other human rights depend.”

Stechschulte is editor-in-chief of Detroit Catholic, the news outlet of the Archdiocese of Detroit.

NEXT: New Jersey diocese turns to renewable energy in response to encyclical