Sister Anita Cattafesta, OSF (formerly Sister Rita), 91, died in Assisi House on Thursday, October 6, 2022. She had been a professed member of the Sisters of St. Francis of Philadelphia for 67 years. Sister Anita was born in South Philadelphia, Pennsylvania, where she was a member of St. Monica Parish and a graduate of J.W. Hallahan Girls High School and Peirce Business School. She entered the congregation in 1952 and professed her first vows in 1955. She earned her bachelor’s degree in English humanities from Villanova University, a master’s degree in education administration from Penn State, and a master’s in theological studies from the Franciscan School of Theology. Sister Anita ministered primarily in education and administration. 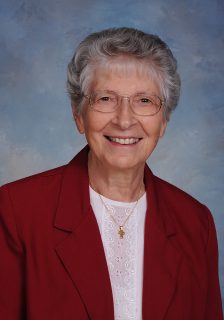 Sister Anita served for 27 years in the Diocese of Trenton, where she taught at Holy Angels School, Trenton, and St. Leo School, Lincroft. She also served as assistant superintendent for the diocese for four years and as coordinator of education for the St. Anthony Province for three years. In later years she served as vice president of mission and ministry for six years at St. Francis Medical Center.

During her 30 years in the Archdiocese of Philadelphia, Sister Anita served on the congregation’s general council from 1978-1986. She also served the congregation as director of sponsorship for six years and in local house ministry for two years. For 14 years Sister Anita worked in various positions of administration at Neumann University in Aston. Since early 2022, she served in prayer and hospitality ministry in Assisi House, where she lived at the time of her death.

Sister Anita also spent five years in Zambia, Africa, serving in education at the MPIMA Seminary in St. Augustine. Additional ministry work included St. Joseph School in Dallastown, Pennsylvania, in the Diocese of Harrisburg, where she was both a teacher and a principal.

All services will be held in Assisi House, 600 Red Hill Road, Aston, Pennsylvania, on Monday, October 17, 2022, and will be livestreamed. A Christian Wake Service will be held at 9:30 A.M. followed by viewing. Mass of Christian Burial will be at 11 A.M. Burial will be in Our Lady of Angels Cemetery in Aston. Sister Anita is survived by her brother Richard; her sisters, Elaine Palla and Diane DeAngelo; several nieces and nephews and their families; and her Franciscan family. Donations in her name can be made to the Sisters of St. Francis Foundation, 609 S. Convent Road, Aston, PA 19014.