Sister St. Joseph Brennion, OSF, 92, died in Assisi House on Saturday, October 8, 2022. She had been a professed member of the Sisters of St. Francis of Philadelphia for 71 years. Sister St. Joseph was born Elizabeth Joan Brennion in Boston, Massachusetts, where she was a member of Holy Trinity Parish and a graduate of Quincy Public High School. She entered the congregation in 1948 and professed her first vows in 1951. She earned a BS in art education from The Catholic University of America, in Washington, D.C., and a master’s in art education from Towson State University. She ministered primarily in healthcare, education, and social services. 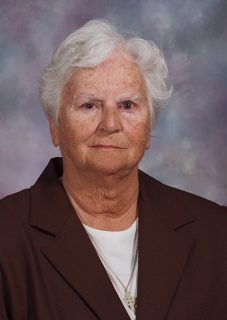 Sister St. Joseph ministered for an additional 21 years in the Archdiocese of Philadelphia. She served in social service work at the Bethesda Project in Philadelphia, St. Mary’s Franciscan Shelter in Phoenixville, and Bethel Shelter and Anna’s Place, both in Chester. She also volunteered for her congregation at Assisi House, in the Franciscan Spiritual Center, and in local house ministry. In 2015, she moved to Assisi House in Aston, Pennsylvania, where she served in prayer and hospitality until her death. She had a superb ability with arts and crafts and often made and donated items to be sold at the Sisters of St. Francis Foundation annual craft fair as well as taught art classes to her fellow sisters in Assisi House.

Additional ministry work included serving as a school nurse and art teacher for The Catholic High School of Baltimore for 13 years. She also served as campus minister for Chaminade University of Honolulu, Hawaii, for two years.

In the 1980s, Sister St. Joseph returned to her home diocese of Boston for six years, serving first as an art teacher and volunteer at Blessed Sacrament School and Parish in Walpole and later in social services at St. Francis House/Boyleston Center in New Bedford.

All services will be held in Assisi House on Thursday, October 13, 2022, and will be livestreamed. A Christian Wake Service will be held at 9:30 A.M. followed by viewing. Mass of Christian Burial at will be at 11 A.M. Burial will be in Our Lady of Angels Cemetery in Aston. Sister St. Joseph is survived by her nieces, nephews, and Franciscan family. Donations in her name can be made to the Sisters of St. Francis Foundation, 609 S. Convent Road, Aston, PA 19014.