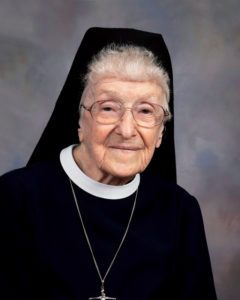 Sister Genevieve Mary Simons died in Camilla Hall on September 28, 2022, in the 84th year of her religious life.  Sister died just shy of her 102nd birthday.

Genevieve Simons was born on October 13, 1920, in Philadelphia; her parents raised their family of three boys and three girls in St. William Parish in Philadelphia.

At the tender age of 89, Sister Genevieve Mary, never tiring of active service, went to Camilla Hall as part of the serving staff from August 2009 through August 2011.  From August 2011 until her death on September 28, 2022, Sister was an active member of the Apostolic Prayer Team as a resident of Camilla Hall.  God rest her beautiful soul!

NEXT: Reverend Edward A. Pelczar