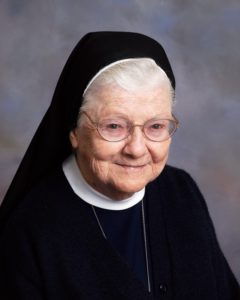 Sister Theresa Marian died in Camilla Hall on October 4, 2022, in the 72nd year of her religious life.

Mary Agnes McCormick was born on April 11, 1932, in Philadelphia. Her parents Thomas and Catherine McCormick (who died in 1947), traveled extensively for employment commitments.

Mary Agnes entered the community on September 8, 1950; she received her habit and her religious name, Sister Theresa Marian, on March 26, 1951, and Sister pronounced her First Vows on April 5, 1953.

Sister Theresa Marian entered the Apostolate of Prayer community at Camilla Hall in August 2015 at the age of eighty-three. Sister continued to serve joyfully and prayerfully until her death at the age of ninety on October 4, 2022.