Sister Helen Ann Gaidos, OSF (formerly Sister John Andre), 91, died in Assisi House on Saturday, October 8, 2022. She had been a professed member of the Sisters of St. Francis of Philadelphia for 73 years. Sister Helen was born in Sheridan, Pennsylvania, where she was a member of St. Gertrude Parish (now St. Cecilia’s) and a graduate of Lebanon Catholic High School. She entered the congregation in 1947 and professed her first vows in 1949. She earned a BS in management from Northeastern University and an MS in hospital and health administration from Xavier University. She ministered primarily in healthcare and parish ministry. 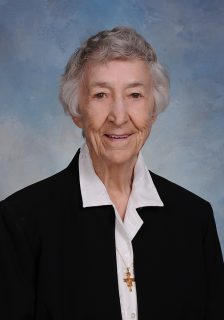 In the Diocese of Harrisburg, Sister Helen spent two years as a student at St. Joseph Hospital in the early years but later returned to the diocese as the director of religious education at Sacred Heart Parish in Cornwell. She also served as a volunteer in parish ministry at both St. Benedict Parish in Lebanon and St. Paul the Apostle Church in Annville.

On the West Coast, Sister Helen spent 16 years at St. Anthony Hospital in Pendleton in the Diocese of Baker, where she served as the hospital’s CEO and president.

Sister Helen spent 18 years in the Archdiocese of Philadelphia. She served in parish ministry for St. Basil Parish in Kimberton as well as for St. Basil the Great Parish in Phoenixville. She also served in local house ministry and as a caregiver for a family member. In 2019, she moved to Assisi House in Aston, Pennsylvania, where she served in prayer and hospitality until her death.

All services will be held in Assisi House on Tuesday, October 18, 2022, and will be livestreamed. A Christian Wake Service will be held at 9:30 A.M. followed by Mass of Christian Burial at 11 A.M. Burial will be in Our Lady of Angels Cemetery in Aston. Sister Helen Ann is survived by her nieces, nephews, and Franciscan family. Donations in her name can be made to the Sisters of St. Francis Foundation, 609 S. Convent Road, Aston, PA 19014.

NEXT: Reverend Edward A. Pelczar