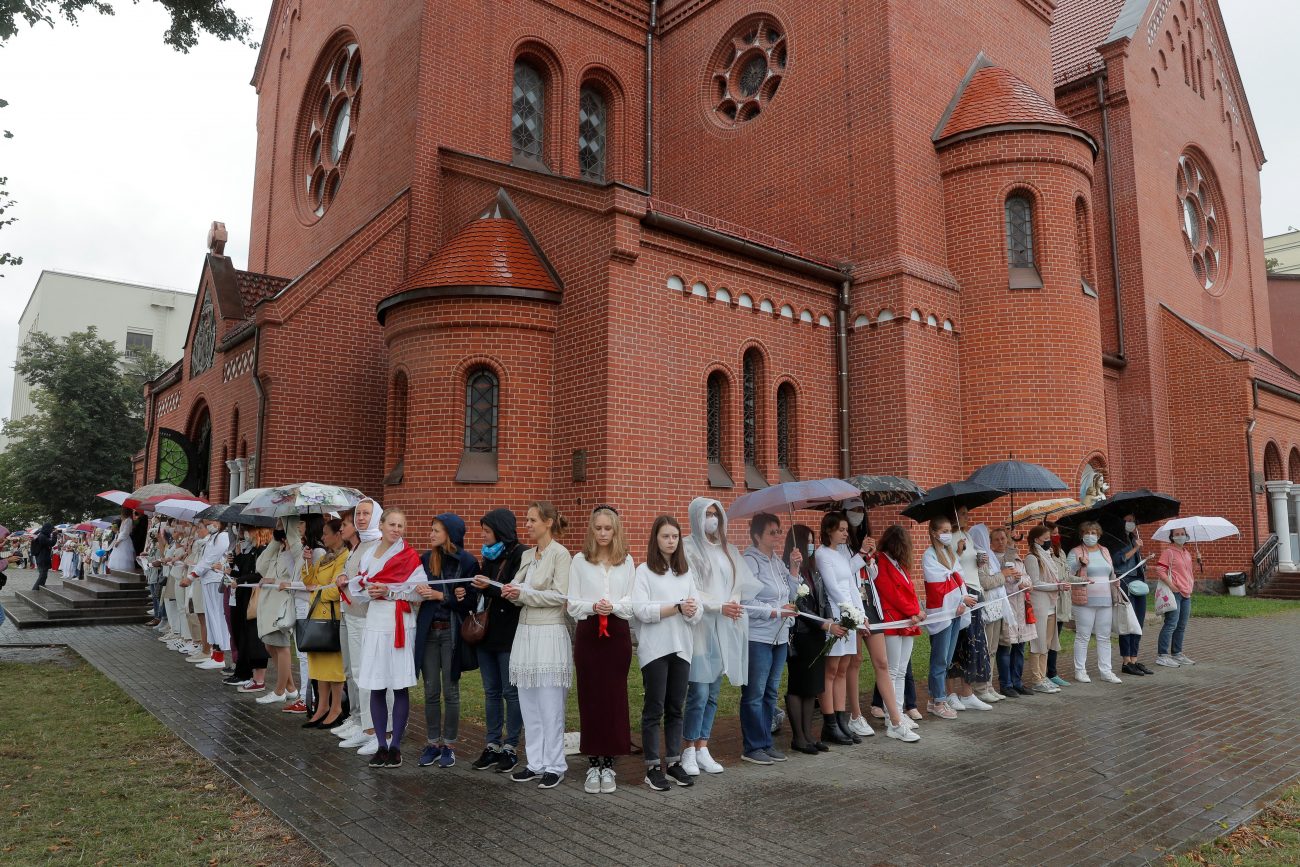 Women form a human chain in front of Sts. Simon and Helena Church in Minsk, Belarus, Aug. 27, 2020, during a protest against presidential election results. Archbishop Iosif Staneuski of Minsk-Mohilev expressed "grave concern" after police and local authorities in Minsk closed the capital's best-known Catholic church after a suspicious fire and ordered the removal of all religious objects by Oct. 12. (CNS photo/Vasily Fedosenko, Reuters)

WARSAW, Poland (CNS) — Christian dissidents in Belarus accused officials of intimidation after one of the country’s best-known Catholic churches was ordered to close following a suspicious fire.

Belarus’ Emergencies Commission said it was terminating the parish’s permit to use the Church of Sts. Simon and Helena, popularly dubbed the Red Church, following the Sept. 26 fire, pending repairs and safety checks. The commission ordered the removal of all religious objects by Oct. 12.

Archbishop Iosif Staneuski of Minsk-Mohilev urged the return of the church and its rectory, noting, “Many residents of our capital are greatly concerned about having no opportunity to pray or simply visit this church, while Minsk itself has been, in a certain sense, orphaned.”

In an Oct. 13 pastoral letter, Archbishop Staneuski encouraged Catholics “to pray for restoration of parish activities as soon as possible.”

The opposition-linked Christian Vision organization said an “immediate public investigation” should be launched into the fire, which was blamed officially on faulty wiring. The organization said Catholic representatives should also be allowed access to assess the church’s current condition.

Local church sources said police agents had broken up a prayer vigil outside the church Oct. 11 and threatened to arrest its rector, Father Vladyslav Zavalniuk, who began a hunger strike Oct. 4.

Meanwhile, parishioners sent an open letter to President Alexander Lukashenko and blamed the fire on “illegal activities by unidentified persons.” They called the order to remove religious objects an “improper and excessive reaction.”

“Strict adherence to procedures stipulated by the law will ensure the interests of the parish, as well as of the state as property owner,” said the letter, signed by Father Zavalniuk. “The Roman Catholic Church has centuries of experience carrying out renovation and restoration work on sanctuaries without closing the church, allowing the faithful to participate in services.”

The Vatican Embassy in Minsk told the Belsat news website Oct. 6 it would not be making any statement about the Red Church. Father Yuri Sanko, spokesman for the Belarusian bishops, was unavailable for comment Oct. 14.

The landmark red-brick Sts. Simon and Helena Church, consecrated in 1910, was looted by Bolshevik revolutionaries in 1923 and turned into a theater and film studio after being closed to all religious activities in 1932.

It became a cinema in the 1960s, after plans to blow it up were thwarted by public protests, and it reopened to Catholic Masses during the Soviet Union’s 1990-91 collapse.

The church, hosting six to eight Masses daily, was restored at Catholic expense but remained state-owned. It was closed by police in August 2020 to prevent its use as a refuge during Minsk protests against Lukashenko’s declared reelection after 26 years in power.

Church sources said the parish had been hit by steadily rising state rents, prompting an archdiocesan complaint in July 2020. They said windows had been smashed at the church before the fire, fueling suspicions it was started deliberately.