In Ukraine, Basilian sisters pitch in and prepare for war’s consequences 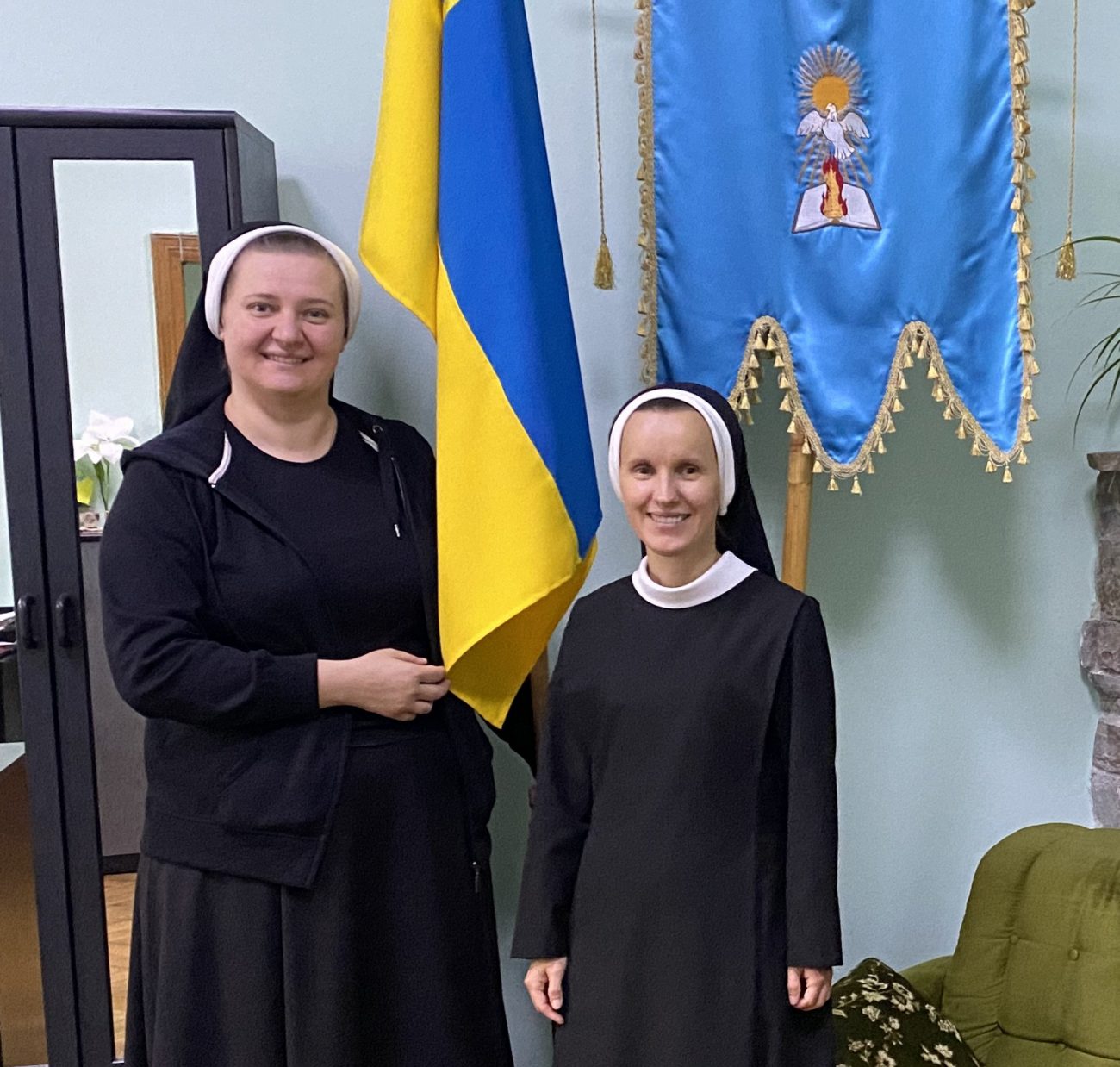 Sister Yeronima Rybakova, left, holds part of a Ukrainian flag next to Sister Josifa Lesnichenko, who teaches English at the school that the Sisters of the Order of St. Basil the Great operate in Ivano-Frankivsk, Ukraine, Sept. 3, 2022. In addition to their duties at the school, the sisters are involved in efforts to help Ukrainian soldiers injured in the Russian invasion of their country. (CNS photo/Rhina Guidos)

IVANO-FRANKIVSK, Ukraine (CNS) — The Sisters of the Order of St. Basil the Great frame conversations about their life in this city in terms of before and after the war.

Sister Yeronima Rybakova, principal of St. Basil the Great Catholic School, which the order operates near the busy city center, said much changed in their community after Feb. 24, the day Russia invaded Ukraine.

“Before the war,” she said in an interview with Global Sisters Report, a ray of hope had arrived for the sisters and their school community. Teachers and students had returned to in-person classes for the first time since the coronavirus pandemic began in March 2020.

But the hope quickly dimmed “after the war.” In-person classes had already closed when Russia’s aggression reached Ivano-Frankivsk in March: Missiles rocked an airport and military base nearby, which the community of women religious heard and felt.

More than a half-year into the conflict, the sisters, like most Ukrainians, don’t dwell on the initial shock. There’s too much to do to help their fellow Ukrainians.

When refugees from the heavily attacked eastern part of the country arrived in the sisters’ city en masse in the first few months of the war, the Basilians scrambled to offer them food, clothes and shelter at the monastery. But the recent advancement of Ukrainian forces, gradually reclaiming many eastern territories that Russia previously invaded, has allowed refugees to return home, and the halls where they sought shelter are empty.

Life, however, remains changed for the sisters’ community.

Some families who were part of the school — and of the lives of the sisters — fled, looking for safety in the United States, Canada, Italy. Some of their pupils’ fathers, and in some cases their mothers, left Ivano-Frankivsk to fight at the front lines in eastern Ukraine.

As the sisters were busy in early September welcoming students to in-person classes once again, they also were organizing fundraisers, visiting soldiers in nearby hospitals, collecting food and clothes to send to the front lines, and providing comfort and psychological help to pupils trying to grapple with what the war has brought to and taken from their lives.

“We don’t know what will happen next,” said Sister Josifa Lesnichenko, who teaches English at St. Basil.

The sisters have piled sandbags near the windows of the 110-year-old St. Joseph Monastery, where they live, in hopes that if something strikes the building, the bags will minimize harm from the flying glass to any civilians passing by.

For decades before the war, the sisters’ mission was education, but they also tend to the elderly and sick and craft clerical clothing for priests among their daily work.

“The main aim of (St. Basil) school is … Christianity and moral education,” Sister Rybakova said. But the school also focuses on a classic education, long valued by the area’s families and their children.

The sisters also care for the “lonely and needy and do household duties,” she added.

Some of the sisters’ work focuses on older women who are bedridden and have no one to care for them. The sisters spend time with them, feed them, clean their houses, and make sure a priest comes to hear their confessions and offer Communion.

With the war, the sisters also have been at the forefront of the Ivano-Frankivsk community’s spiritual life, leading daily prayer and calls to action.

“We don’t know what (else) to do but only (to) pray with students,” Sister Lesnichenko told Global Sisters Report.

They livestreamed liturgical services as well as the rosary and other prayers during some of the toughest days early in the war. It’s a practice that has remained and one that helps their teachers, parents, and students who have left Ivano-Frankivsk but long for home.

“Together, we (have) a common prayer for Ukraine,” Sister Rybakova said. “Prayer is our first mission.”

It’s what gives them strength but also drives them to actively take part in efforts to help their fellow Ukrainians in these dark days, the nuns said.

“We have to do something, not only pray,” Sister Rybakova said. “We collected clothes, medicine, food, and different kinds of products for our soldiers. We received humanitarian aid and gave all for the armed forces, for our soldiers.”

Their students have followed their example, sending letters and drawings to soldiers trying to prevent the fall of their country.

“In this way, we show our (gratitude) for our soldiers,” Sister Rybakova said.

Though the school has been struggling financially, the sisters have enrolled at no charge 10 students who are refugees in the city and another 10 whose parents are fighting in the war. They have expanded their online classes to include former students who had to leave the city and now are in nearby or neighboring countries, such as Poland, Slovakia and Austria.

The sisters also are making plans to help the government care for children who have had both parents killed in the war and provide a temporary home for them until a more stable family can be found.

“Every day, we pray for peace in Ukraine and for the victims of war,” Sister Rybakova said. “We only know this moment … we don’t know what the next day will look like, only this day, and we pray every time for peace, for our life for Ukraine, and maybe the war will finish.”

This story was originally published in Global Sisters Report, a project of National Catholic Reporter.

NEXT: Pope: Church’s concern for the family goes beyond focus on couples