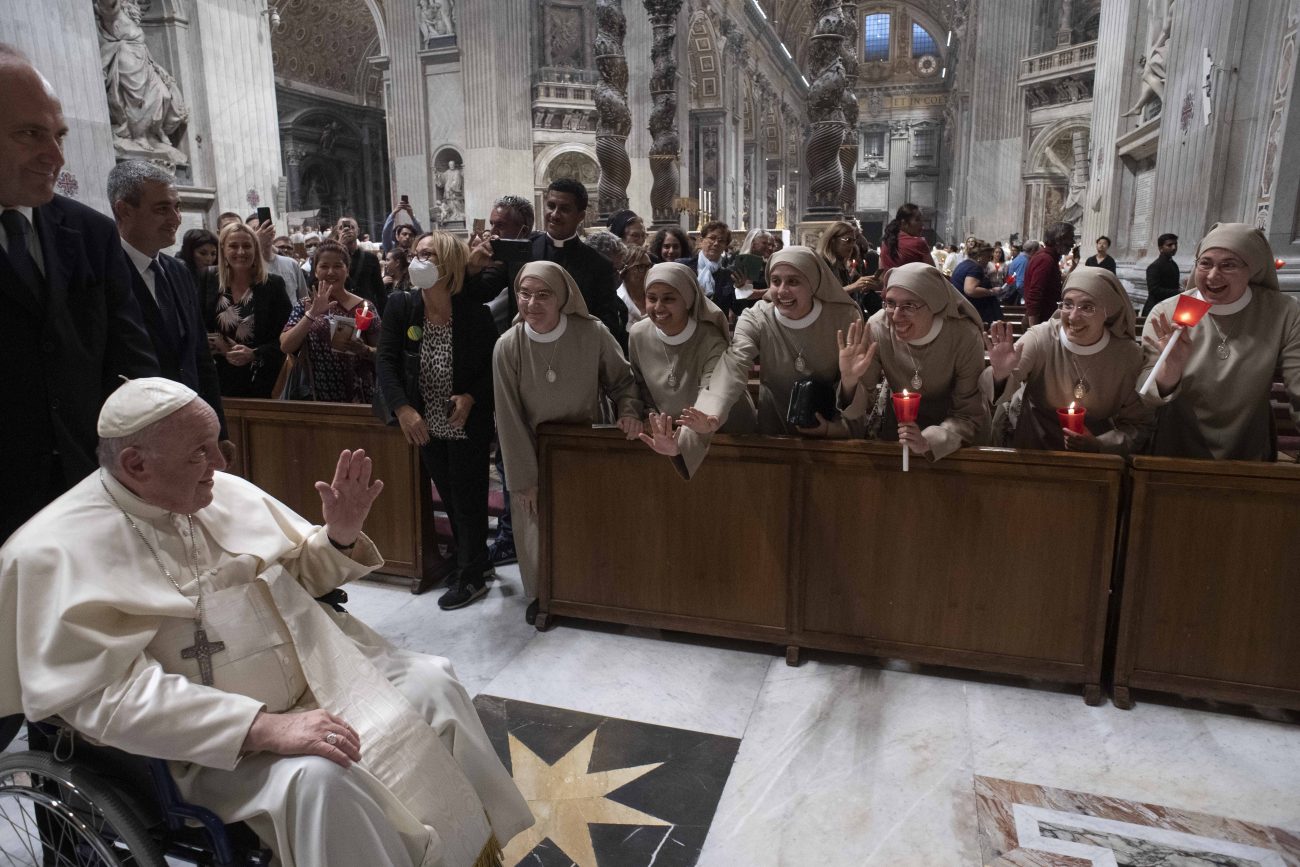 Pope Francis waves to a group of nuns after celebrating Mass in St. Peter's Basilica Oct. 11, 2022, to mark the 60th anniversary of the opening of the Second Vatican Council. (CNS photo/Vatican Media)

VATICAN CITY (CNS) — The Second Vatican Council was the universal Catholic Church’s response to God’s love and to Jesus’ command to feed his sheep, Pope Francis said, celebrating the 60th anniversary of the council’s opening.

The council reminded the church of what is “essential,” the pope said: “a church madly in love with its Lord and with all the men and women whom he loves,” one that “is rich in Jesus and poor in assets,” a church that “is free and freeing.”

Pope Francis presided over the Mass Oct. 11 in St. Peter’s Basilica, where the council sessions were held in four sessions from 1962 to 1964. The date is also the feast of St. John XXIII, who convoked and opened the council; the glass urn containing his body was moved to the center of the basilica for the liturgy.

The Gospel reading at the Mass recounted Jesus asking St. Peter, “Do you love me?” and telling him, “Feed my sheep.”

In his homily, the pope said the council was the church’s response to that question and marked a renewed effort to feed God’s sheep, not just those who are Catholic, but all people.

The debates that followed the council and continue today are a distraction from the church’s mission, Pope Francis said.

“We are always tempted to start from ourselves rather than from God, to put our own agendas before the Gospel, to let ourselves be caught up in the winds of worldliness in order to chase after the fashions of the moment or to turn our back the time that providence has granted us,” he said.

Catholics must be careful, he said, because “both the ‘progressivism’ that lines up behind the world and the ‘traditionalism’ that longs for a bygone world are not evidence of love, but of infidelity,” forms of “selfishness that puts our own tastes and plans above the love that pleases God, the simple, humble and faithful love that Jesus asked of Peter.”

“A church in love with Jesus has no time for quarrels, gossip and disputes,” the pope said. “May God free us from being critical and intolerant, harsh and angry. This is not a matter of style but of love.”

Jesus, the good shepherd, “wants his flock to be united under the guidance of the pastors he has given them,” the pope said, but the devil loves to sow division; “let us not give in to his enticements or to the temptation of polarization.”

“How often, in the wake of the council, did Christians prefer to choose sides in the church, not realizing that they were breaking their mother’s heart,” the heart of their mother, the church, Pope Francis said.

How often, he asked, did they prefer “to be on the ‘right’ or ‘left,’ rather than with Jesus? To present themselves as ‘guardians of the truth’ or ‘pioneers of innovation’ rather than seeing themselves as humble and grateful children of Holy Mother Church?”

The council, he said, taught the church to see the world around it and to share God’s love with all, knowing that “if it is fitting to show a particular concern, it should be for those whom God loves most: the poor and the outcast.”

With Orthodox, Anglican and Protestant representatives present, as they were at the council, Pope Francis also prayed that “the yearning for unity” would grow within each Christ, “the desire to commit ourselves to full communion among all those who believe in Christ.”

Thanking God for the gift of the council, the pope asked the Lord to “save us from the forms of polarization that are the devil’s handiwork. And we, your church, with Peter and like Peter, now say to you: ‘Lord, you know everything; you know that we love you.'”

Pope Francis, who was ordained to the priesthood in 1969, is the first pope ordained after the Second Vatican Council. His immediate predecessor, now-retired Pope Benedict XVI, attended all four sessions of the council as a theological adviser — a “peritus” — to the archbishop of Cologne, Germany. St. John Paul II participated in all four sessions as a full member of the body, first as auxiliary bishop of Krakow, Poland, and then as archbishop of the city.

Among the more than 400 priests concelebrating the Mass, the Vatican liturgical office said there were five who were present at Vatican II.

According to the websites GCatholic.org and catholic-hierarchy.org, there are six bishops alive in the world today who participated in at least one session of the Second Vatican Council. Among them is Nigerian Cardinal Francis Arinze, an 89-year-old former Vatican official who was ordained a bishop in 1965 and attended the council’s last session; he was one of the concelebrants at the anniversary Mass.

Before the Mass, passages were read from the speech St. John XXIII gave at the council’s opening. Known by its opening words in Latin, “Gaudet Mater Ecclesia,” the speech begins: “Mother Church rejoices.”