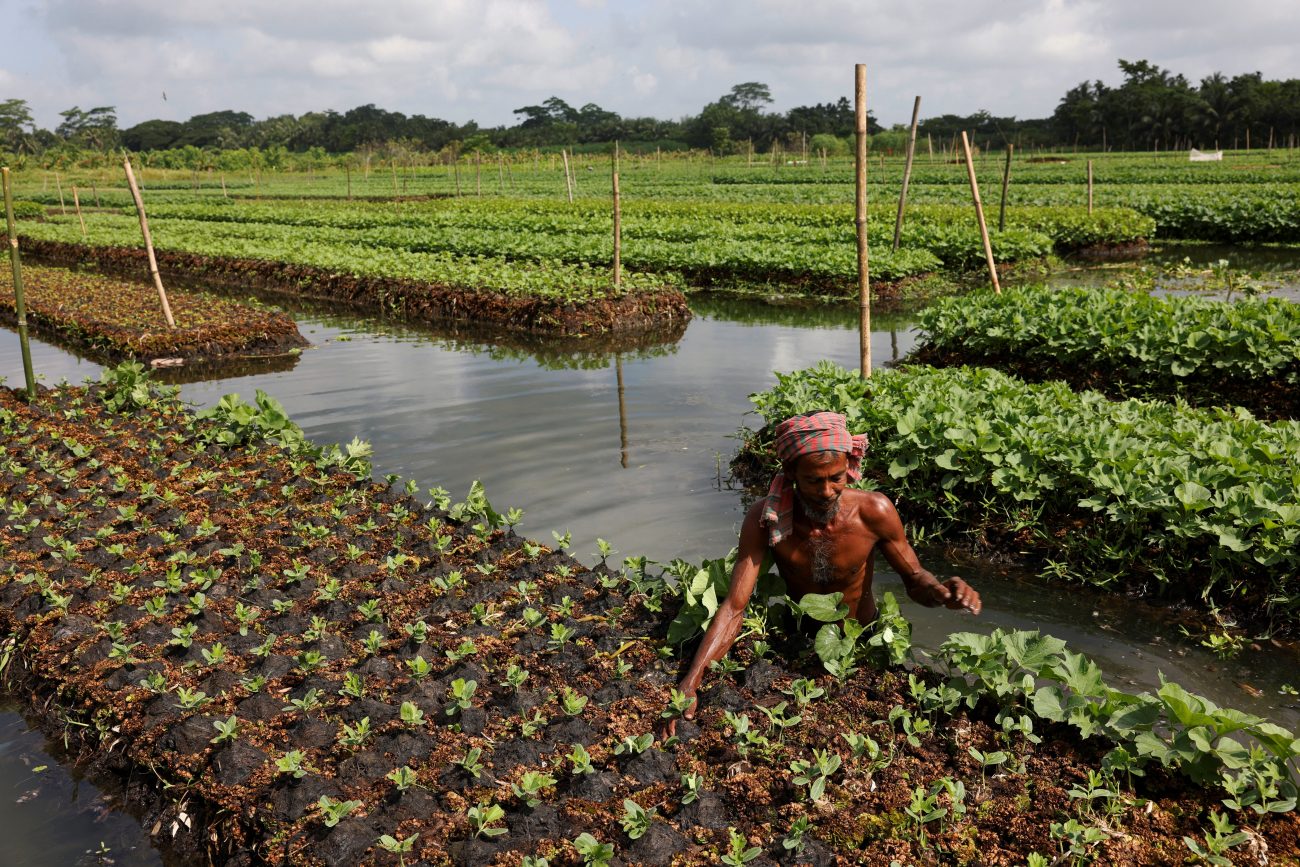 A farmer places water weeds on top of the seedlings' root on a floating bed at his farm in Pirojpur, Bangladesh, Aug. 16, 2022. During monsoon seasons when dry land is scarce, many farmers in the southwestern part of Bangladesh plant crop seedlings and grow vegetables on the floating rafts, which are made from invasive water hyacinths. This method of farming ensures food security in the low-lying country, which has been experiencing prolonged floods and water-logging because of the changing climate in recent years. (CNS photo/Mohammad Ponir Hossain, Reuters)

Declining access to food, greater discrimination against women and widening restrictions on religious freedom have contributed to a higher rate of poverty worldwide, said a new report issued by a Fordham University program.

Overall, 26.2% of the world’s population lives in poverty, according to the Fordham Francis Global Poverty Score.

The score is based on seven measures for human well-being — four governing material needs and three related to spiritual needs — identified by Pope Francis during a 2015 address to the United Nations.

Henry Schwalbenberg, director of the university’s graduate program in International Political Economy and Development, said the findings show that extreme poverty as measured under the seven criteria is the highest since the score was developed in 2015.

The program released the report Nov. 11 during a United Nations side event at the school marking the World Day of the Poor, which Pope Francis designated for the 33rd Sunday of Ordinary Time. This year the day falls on Nov. 13.

The report said the score is an average of data collected from more than 80 countries, none from the developed world. It uses the most recent available data — some dating from 2019 — from various U.N. agencies and nongovernmental organizations to make its assessment.

Schwalbenberg and graduate student Maria Hincapie told an in-person audience at the university and viewers watching online that discrimination against women rose in 2021, according to data collected from the World Economic Forum. An estimated 51.2% of women in the surveyed countries faced discrimination, the report said.

Meanwhile, in 2019, 58.9% of people — nearly 4.5 billion — lived in countries “where religious freedom is severely restricted,” the report said.

When questioned why gender inequality and religious freedom are factored into the measure of global poverty, Schwalbenberg explained that it comes down to “a philosophical decision” on what to include and that the program wanted to follow the pope’s description of factors affecting human well-being.

Opening the program, Archbishop Gabriele Caccia, the Vatican’s permanent observer to the U.N., said Pope Francis originated World Day of the Poor to encourage people to go to the margins of society.

The archbishop said the pope is calling people to reject “laxity” in responding to the needs of people struggling to have their basic needs met.

“In this world of globalization, what is globalized, unfortunately, is indifference,” he said.

Secondly, the pope is calling for people to be in solidarity — that is sharing — with others, Archbishop Caccia explained. Sharing can take many forms, he said, but to do so requires going out to the margins of society.

As a third step, which the archbishop described as the most demanding, is “to always look at the one who didn’t stop doing this, Jesus.”

“Jesus is the model. He was like God. He decided to become man, to be hungry, thirsty, unjustly accused, persecuted and killed. If we don’t enter into this kind of mentality, if we don’t keep our eyes fixed on him, we can be easily discouraged and we give up after a while,” he said.

Reiterating that point, O’Keefe explained how CRS has developed a campaign to build greater Catholic response to climate change, foster greater awareness of how climate change affects vulnerable communities and address the root causes of a warming planet.

CRS is the U.S. bishops overseas relief and development agency.

Interspersing stories of the consequences of climate change on people in Africa, Asia and Latin America, O’Keefe described how CRS is helping communities integrate new farming practices, water conservation and to ease food and water shortages.

Even with such practices, the campaign advocates for the United States to take on a greater role in helping poor communities adapt to and mitigate the effects of climate change, he said.

NEXT: USCCB: Nationwide Prayer Vigil for Life to Continue After Reversal of Roe v. Wade