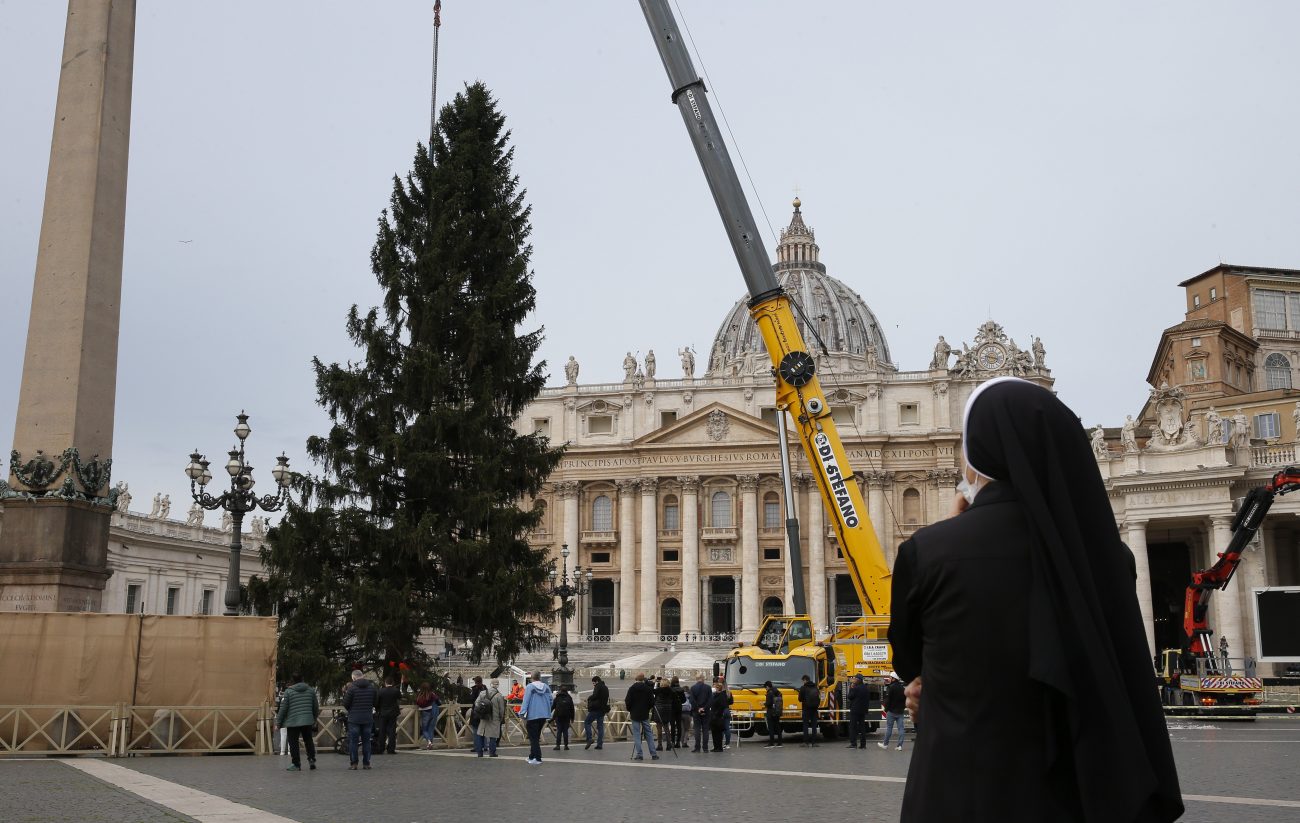 A nun watches as the Christmas tree is positioned in St. Peter's Square at the Vatican Nov. 23, 2021. After a controversy over the selection of this year's Vatican Christmas tree, the Vatican will receive a tree from an Italian tree farm. (CNS photo/Paul Haring)

VATICAN CITY (CNS) — The centuries’ old silver fir tree that had been destined to become the centerpiece Christmas decoration in St. Peter’s Square will now live, perhaps to see another century.

When it emerged back in 2019 that the small village of Rosello in Italy’s central Abruzzo region was donating the tree to the Vatican for 2022, local activists started flagging problems, such as the lack of transparency concerning the donation and the failure to carry out an environmental impact study.

Dario Rapino, a lawyer and nature photographer, even wrote to Pope Francis in 2020, pointing to his encyclical “Laudato Si’ on Care for Our Common Home” and the importance of avoiding any unnecessary human impact on the environment, according to local media reports.

Even the World Wildlife Fund had put out a statement Nov. 7 saying, “cutting a tree of this size in the midst of a climate crisis is a debatable decision,” which required “greater transparency.”

However, it wasn’t until Rapino recently tracked down the 98-foot-tree, that he discovered it was not located in Rosello, much less in the region of Abruzzo, but was, in fact, in a protected area in the nearby region of Molise in the township of Agnone, according to a report Nov. 12 by ChietiToday. The tree’s size, he said, also put it at around 200 years old.

He told the press, “The pope will be given a tree from Agnone passed off as being from Rosello, not that it changes much, because it is still all about destruction.”

Rapino said he notified the region of Molise and the province’s forest service about stopping the operation since Rosello lacked the authorization to cut down a tree outside its jurisdiction, according to a report Nov. 13 by EcoAltoMolise.net.

According to the same outlet, Col. Gianluca Grossi, head of the provincial forest rangers, told the news outlet Nov. 14 that the planned tree-cutting was stopped because local officials from the town of Agnone and the village of Rosello called for a delay so they could complete the required documentation.

Rapino told ChietiToday Nov. 15 that the village of Rosello had decided to take a tree for the Vatican from a tree farm in Palena in the region of Abruzzo.

The Vatican had announced Oct. 28 that the traditional tree lighting ceremony and unveiling of the Nativity scene in St. Peter’s Square would be held Dec. 3. The display will remain up until after the feast of the Baptism of the Lord Jan. 8.

The Nativity scene that will sit under the tree this year will feature 19 life-sized figures carved in cedar by artisans in the northeastern Italian town of Sutrio. The decorations on the tree were made by young adults at a residential psychiatric facility in Rosello.

The cedar for the Nativity scene figures, the Vatican had said, came from trees selectively cut by gardeners to improve the health of other trees in several public and private gardens. None of the trees were cut specifically for the sculptures.

The Holy Family, the ox and donkey and an angel will be under an arched structure made of larch. The other figures — including the Three Kings, the shepherdess, a carpenter, a family and a “Cramar,” or local wandering salesman, will be on the surrounding platform or ramps leading to it.