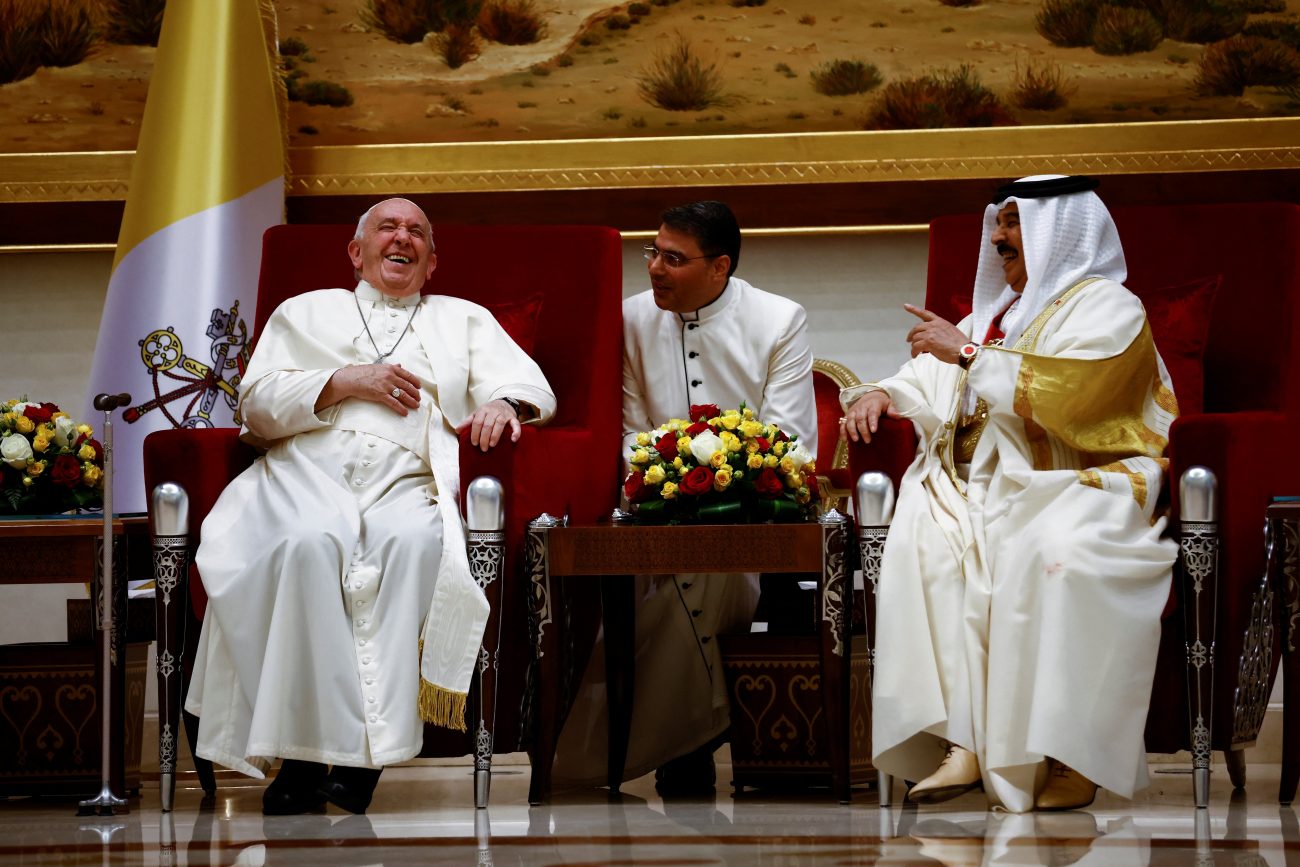 Pope Francis shares a laugh with Bahrain's King Hamad bin Isa Al Khalifa during a meeting in the Sakhir Palace Nov. 3, 2022. The pontiff is on a four-day visit to Bahrain. (CNS photo/Yara Nardi, Reuters)

AWALI, Bahrain (CNS) — Pope Francis promised reporters traveling with him to the Gulf nation of Bahrain that his Nov. 3-6 visit would be an “interesting trip.”

Thanking the more than 65 reporters, photographers and television-camera operators on the plane with him from Rome, the pope added that he hoped the trip would include “good news.”

However, he said, the chronic knee pain he has been suffering was a lot worse than usual, so instead of following his customary practice of going up and down each aisle to greet reporters, he asked that everyone come up to him, as he took a seat in front of the reporters’ section of the plane.

The pope’s schedule for the four-day trip was limited to just a few events a day, mostly in Awali, but with a brief visit planned to Manama, the capital.

He is the first pope to visit the archipelago nation in the Persian Gulf, and the highlights of his visit were expected to be meeting the small, predominantly expatriate Christian community and promoting the importance of interreligious dialogue.

The pope arrived Nov. 3 at the Sakhir air base after a nearly five-hour flight from Rome. It was his 39th international trip and the 58th country he has visited in nearly 10 years as pope.

While journalists exited the plane using stairs as usual, the pope entered the airport through a jetway where girls tossed flower petals as he passed in his wheelchair. Once he arrived in the airport VIP meeting room, he was greeted by King Hamad bin Isa Al Khalifa and Crown Prince Salman bin Hammad Al Khalifa, who is the country’s prime minister and the king’s eldest son.

After the pope and king also greeted Sheikh Ahmad el-Tayeb, grand imam of Egypt’s Al-Azhar mosque and university, the papal motorcade left for Sakhir Palace for the official welcome ceremony, an exchange gifts with the king and the pope’s first speech of the trip at a meeting with government and civic leaders.

This story will be updated throughout Pope Francis’ visit to Bahrain.

NEXT: Irish priest’s comments about transgenderism, gays result in suspension