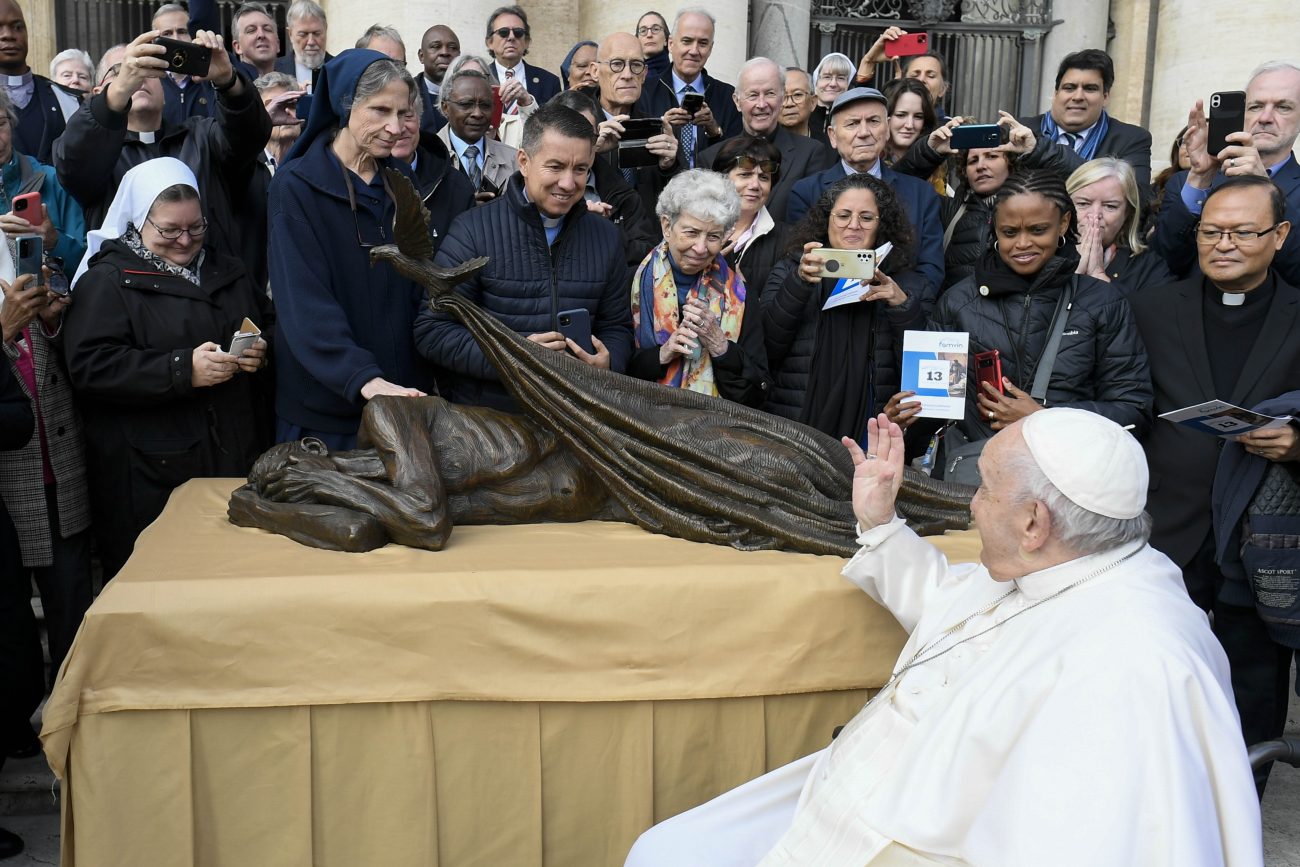 Pope Francis waves to members of the Vincentian religious orders and lay communities Nov. 9, 2022, after blessing Canadian artist Timothy Schmalz' new sculpture, Sheltering. The statue, which features a dove laying a blanket over a homeless person, will be used in conjunction with a Vincentian project to build homes for some 10,000 people in 160 countries. (CNS photo/Vatican Media)

VATICAN CITY (CNS) — A dove in flight lays a blanket over a homeless person in a new sculpture by Canadian artist Timothy Schmalz.

Pope Francis blessed the statue, titled Sheltering, as Schmalz looked on Nov. 9 with about 60 representatives of the Vincentian religious orders and lay communities that are using the statue in conjunction with a project to build houses for some 10,000 people in the more than 160 countries where the Vincentian Fathers, the Daughters of Charity and their collaborators work.

The “13 Houses Campaign” is an homage to St. Vincent de Paul and his decision in 1643 to use an endowment from French King Louis XIII to build 13 small houses near the Vincentian headquarters in Paris to care for abandoned children.

Schmalz told reporters he hoped the statue would be “as shocking as the problem of homelessness is shocking.”

Joining Schmalz for the blessing of the statue were: Mark McGreevy, president of the Depaul Group and coordinator of the housing project; Father Tomaz Mavric, superior general of the Vincentians; and Sister Julie Kubasak, a U.S. member of the general council of the Daughters of Charity.

Schmaltz already has a large sculpture featuring migrants in St. Peter’s Square and another of the “Homeless Jesus” sleeping on a bench outside the Dicastery for the Service of Charity.

Vatican officials and the Vincentians are still discussing the best place to display the statue at the Vatican and where to place copies of it around the world, he said.

Schmaltz referred to the piece as his first “begging statue.”

“People don’t carry cash with them anymore,” which makes life difficult for people asking for a handout from passersby, he said. His statue and copies of it will have a QR Code that people can scan not only for information about Sheltering, but also “to give a dollar or two” to the Vincentians’ project to help the homeless and to build houses.

McGreevy said donors can use the code to help fight homelessness in their own city or anywhere around the world where the Vincentians work.

So far, he said, the project has raised $5 million and helped more than 8,600 people by building 2,311 housing units in 60 countries. The project has no set fundraising goal, he said; “as much as we raise, we’ll use to build houses.”