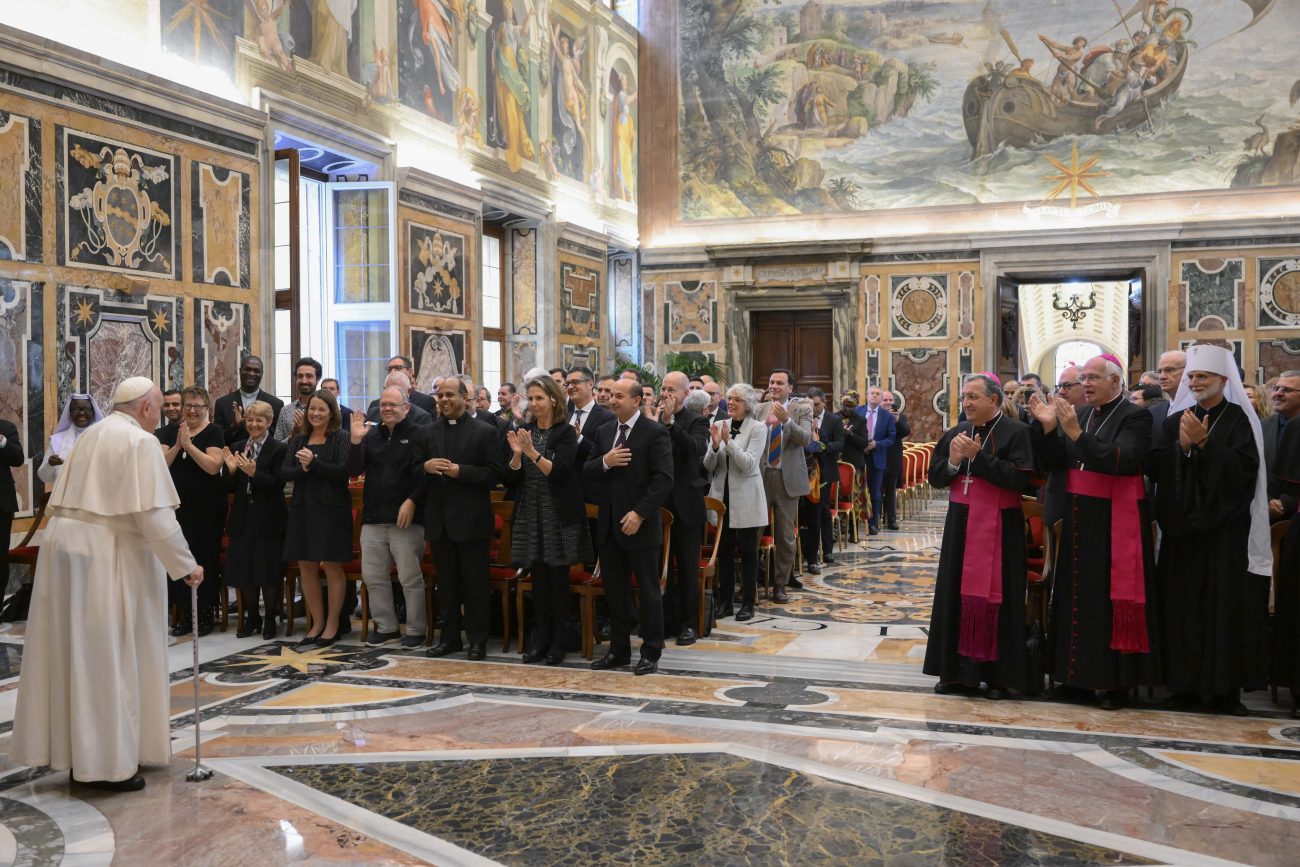 Members, consultants and staff of the Vatican Dicastery for Communication applaud Pope Francis during an audience Nov. 12, 2022, in the Clementine Hall of the Apostolic Palace at the Vatican. (CNS photo/Vatican Media)

VATICAN CITY (CNS) — Communication must bring people closer, give voice to the voiceless, put the spotlight on what gets ignored and show that it is possible to have a diversity of views rooted in the truth, Pope Francis said.

“Communion is never uniformity, but the ability to hold very different realities together,” the pope told employees and members of the Dicastery for Communication during an audience at the Vatican Nov. 12.

“Communication also must make possible a diversity of views, while always seeking to preserve unity and truth, fighting slander, verbal violence, personalism (cult of personality) and fundamentalism that, under the guise of being faithful to the truth, only spread division and discord,” he wrote in his prepared remarks.

“If it succumbs to these degenerations, communication, instead of doing much good, ends up doing much harm,” he added.

The pope’s text was given to people attending the dicastery’s plenary assembly, which was dedicated to the topic of synodality and communication.

One of the many challenges in communication, he wrote, is to be prepared for the intense effort required to effectively communicate in a world that often misunderstands or is reluctant to understand.

Even Jesus and his word often were misunderstood, sometimes leading to “real tragedies, as happened to Judas Iscariot, who confused Christ’s mission with a political messianism,” the pope wrote.

Therefore, he said, those in the field of communication must be aware of the difficult work ahead of them.

“Very often those who look at the church from the outside are puzzled by the different tensions in it,” he wrote. “But those who know the way the Holy Spirit works know well that he loves to make communion out of diversity, and to create harmony out of confusion.”

Communion involves holding “very different realities together,” he wrote, without the pretense of trying to solve or conceal the differences. “Dissent is not necessarily an attitude of rupture, but it can be one of the ingredients of communion.”

“The first task of communication should be to make people less lonely” as it should be a craft that creates bonds that tie people or communities together, he wrote. It should “foster closeness, give voice to the excluded, draw attention to what we normally discard and ignore” so that from these relationships and dialogue, “God’s voice resonates and is heard.”

All true communication emerges from sincere listening and genuine encounters that reveal “the great questions of today’s men and women,” he wrote. “If we do not know how to be (immersed) in real life, we will only be giving directions from above that no one will listen to.”

Being immersed in reality includes giving voice to the voiceless, he added. Very often communication departments might “marginalize and censor what is uncomfortable and what we do not want to see.”

But the church, “thanks to the Holy Spirit, knows that it is her task to be with the least” and those who live on the margins “because of certain choices or family failures or because of personal events that have indelibly marked their past,” he wrote.

“Jesus was never afraid of the leper, the poor, the stranger, even if these people were marked by a moral stigma,” and he never turned his back on those who were “not in conformity” with prevailing rules or traditions, the pope wrote.

During the papal audience, the pope chose to distribute his lengthy text and speak informally with his guests, conveying points similar to what was in his written message and personally thanking and praising some of the journalists in attendance.

Working in the field of communication requires always journeying outward and taking risks, “giving my life with my values: Christian and human values,” he told them.

“Do not be afraid! Take the risk of encountering the other through communication,” he said.

PREVIOUS: Live the Gospel by treating others as a brother or sister, pope says

NEXT: Religious leaders seek consensus-based approach for decisions on climate