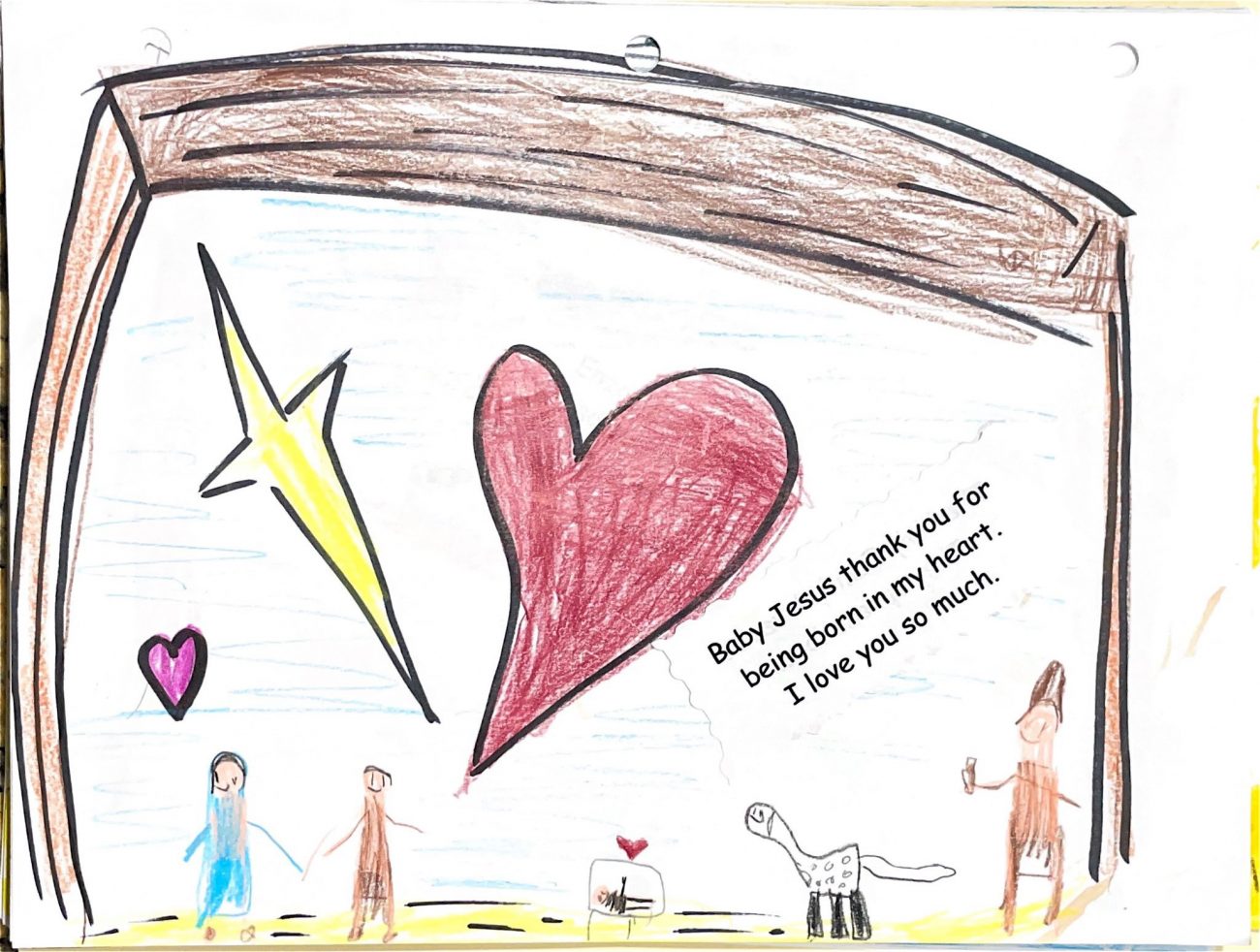 This Christmas drawing is by a student in Uvalde, Texas, one of the survivors of a mass shooting at the city's Robb Elementary School May 24, 2022. The drawing is featured in a cover story in the Winter 2022 issue of Catholic Extension's magazine. The artist "envisions baby Jesus' manger in our hearts, a suitable place where his love can grow," says the story. (CNS photo/courtesy Catholic Extension)

The cover of the winter issue of Catholic Extension’s magazine is a colorful patchwork of Christmas drawings by children from Ukraine and Uvalde, Texas.

A poignant message printed by one of the children also has a place on the cover: “Dear Pope Francis, I need advice on how to make the world more safe for others.”

Extension’s cover story is about Christmas through the eyes of these children who “come from different cultures and parts of the world, but what they share in common is faith — faith in the midst of terror, violence and war,” the story said.

The “violence” refers to the mass shooting at a Uvalde public school in May and the Russian war against Ukraine, which began in February.

“In the midst of the brutality that they have witnessed, these children of Uvalde and Ukraine give witness to their faith in a tender God, born in a manger, who is capable of bringing them heavenly peace,” it said.

The first group featured is from Sacred Heart Catholic School in Uvalde, which Catholic Extension has supported with scholarships and healing ministries.

Many of these children were directly impacted by the mass shooting that took the lives of 19 children and two teachers at Robb Elementary School May 24 in the deadliest school shooting in Texas history.

In addition to facilitating a project in which the Texas children wrote letters to Pope Francis in the fall, Catholic Extension asked the children to draw a picture of the Nativity answering the question: “If Jesus came today, where would he be born?”

In one drawing, a Uvalde student imagines Jesus coming not to a faraway land but “being born next to me.” In another, the artist “envisions baby Jesus’ manger in our hearts,” and still another shows baby Jesus cradled in his mother’s arms.

“In almost all the renderings, the doctor tells Mary, ‘Your baby is healthy,'” the story said, adding that many of the children “clearly spent too much time in hospital rooms” after the shooting.

The Extension story noted these children are “big fans of the pope and feel that Jesus and Pope Francis would get along just fine.”

In October, a Catholic Extension news release announced that the Vatican responded to letters the Uvalde children wrote to Pope Francis after the mass shooting.

Some of the students were wounded during the shooting; others lost loved ones. All were harmed by the violence and they shared their “sorrows and hopes,” asking the pope to pray for their friends, family and community.

“His Holiness will remember the students, their families and all of those suffering from the recent act of violence in Uvalde,” the Vatican said. “Commending each of them to the protection of Mary, Mother of the Church, His Holiness imparts his blessing.”

The second group of children featured in Extension’s winter issue were displaced by war in Ukraine and found shelter in the convent of the Basilian sisters in Lviv. Among those contributing drawings and letters were Vlada-Maria Hohlochova, 11, and Khrystyna Hohlochova, 8.

Vlada-Maria drew a Christmas angel guarding a manger and her sister drew a Nativity scene with Mary, the baby Jesus and Joseph.

They also wrote a letter thanking Catholic Extension and its donors for “your generous and open heart, that you allow God to act through your actions. Thank you for helping us in this difficult time for Ukraine and difficult time for us.”

“P.S. Ukraine will prevail!” they added.

Another child’s drawing shows the baby Jesus protected by his parents, angels and a sturdy roof over his head.

Catholic Extension has supported the Ukrainian Catholic Church in the United States since 1979. “This relationship provided us an immediate and effective pathway to help the Catholic Church in Ukraine as it cares for vulnerable people in the war-torn nation,” a news release said.

Since its founding, Catholic Extension’s mission has been to build up Catholic faith communities in underserved regions by raising funds to help these communities, like Uvalde.

It helps construct churches in U.S. mission dioceses, many of which are rural and cover a large geographic area. Many have limited personnel and pastoral resources.

Editor’s Note: For more information about Catholic Extension, including the Uvalde and Ukrainian children’s Nativity drawings and letters, go to https://www.catholicextension.org.

NEXT: USCCB: U.S. Bishops’ Chairman for International Justice and Peace Calls for Restoration of Religious Freedom and Human Rights in Nicaragua