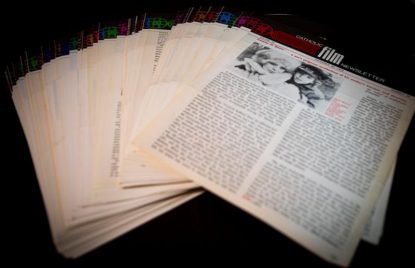 Faced with a changing social landscape, as early as the 1950s, the Catholic film office began to give broader consideration to the artistic value of films that depicted topics and used language that might have earned a condemned classification in the past.

The once influential Catholic film office had been able to get Hollywood studios to change content in movies it deemed morally offensive for decades, but that power was extinguished as the 1970s rolled into the 1980s.

In game gone wild, ‘Jumanji: The Next Level’ a thrill for families

This sequel to the 2017 film about a video game adventure that becomes all too real shows the teamwork of its characters and an unexpectedly somber message about approaching death.

Problematic ‘The Two Popes’ gets its history wrong

Fine acting and high production values do not compensate adequately for a fast and loose version of recent -- or ancient -- church history in this tale of Popes Benedict and Francis.

How is this movie as morally bankrupt as it is aesthetically unpleasant? It starts with its main character getting a colonoscopy -- and goes downhill from there.

There's black goo oozing from a statue, with no clue as to what it symbolizes, in this frat-boys-vs.-sorority-sisters thriller.

Court crusader aims to find what’s in those ‘Dark Waters’

The fact-based drama about one resident of a DuPont company town suing its main employer for the chemical poisons in the water supply shows a rural landscape where the wealthy exploit the poor with impunity.

Film examines whether papal message could have saved Europe’s Jews

One great unanswerable question regarding the Catholic Church and the Holocaust is whether Jewish lives would have been saved had Pope Pius XI or his successor, Pope Pius XII, issued a statement urging the protection of Jews in Axis-held Europe.

A selection of books by diverse authors including musician/songwriter Matt Maher can help fill your gift list for children this Christmas, even if they won't fit into a stocking.

‘Love and Mercy: Faustina’ explores history of a popular devotion