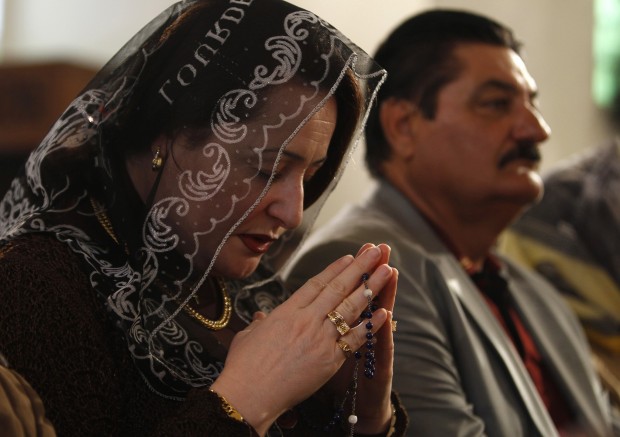 ROME (CNS) — Western nations need to respect the people of the Middle East and trust them to solve their own problems, said an Iraqi diplomat, an Iraqi archbishop and a Syrian-born representative of the Melkite Catholic Church.

The two religious leaders also called for an end to foreign military intervention and other interference in the region that they said only foment strife and hinder their citizens’ desire for peace.

Their comments came during an event sponsored by the Iraqi Embassy to the Vatican Sept. 24. Ali Nashmi, a Muslim professor and historian spoke on the contribution by Iraqi Christians throughout history to the preservation of both eastern and western cultures.

In his opening remarks, Iraq’s ambassador to the Vatican, Habeeb Mohammed Hadi Ali Sadr, urged Arab nations to support Christians within their own borders and abroad, noting the contributions of Christians to national cultures and to providing social services, including schools and medical facilities.

“It’s also up to the Christian west to change its mistaken beliefs about Islam,” and recognize that “real Islamic values do not clash with other religious values,” he said, arguing that acts of violence committed in the name of Islam are the work of unrepresentative “degenerate groups.”

The ambassador called on western nations to “treat important Arab and Islamic issues objectively and with balance,” steering away from double standards and focusing on shared interests.

By sharing its cultural, economic and social assets for the promotion of peace worldwide, the west can join forces with the east in facing the world’s challenges — particularly religious fanaticism, intolerance and “abuse” of other religions “in the name of freedom of opinion,” he said.

Sadr said the recent video mocking the prophet Mohammed was an example of such abuse, and was a setback in the common cause for peace.

Iraqi Archbishop Jules Mikhael Jamil, the Syrian Catholic Church’s representative to the Vatican, said he felt the west had little regard for Middle Eastern Christians.

“In broad terms, we in the east feel that the western policies generally don’t think about eastern Christians,” he told Catholic News Service after the event.

“Western policies would prefer that eastern Christians not be there” because in some way their presence is hindering any foreign attempt to control the region’s natural resources, he said.

Melkite Catholic Msgr. Mtanios Haddad, the Melkite Catholic Church’s representative to the Vatican, addressed the audience and received loud applause when he said: “We don’t want protection from Europe or America; mind your own business.”

He said people in the Middle East don’t want to be treated as “ignorant (people) who need saving.”

The Syrian-born priest said the region can use help in negotiations and dialogue between conflicting parties, but that foreign help must be “without arms, without money, without terrorists. We want nothing but peace.”