Presidential candidates on opposite sides of the abortion issue 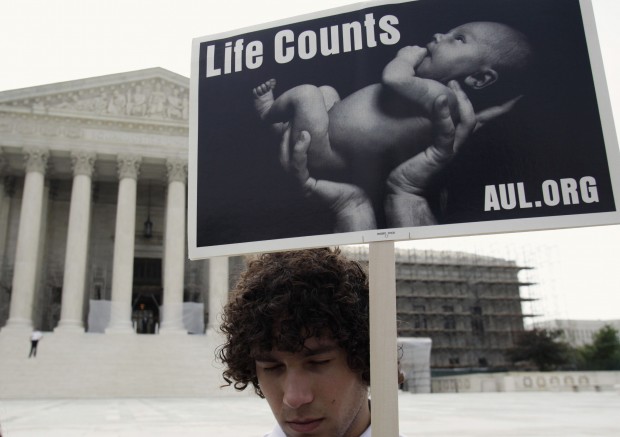 WASHINGTON (CNS) — At the Democratic National Convention in Charlotte, N.C., the differences on abortion between President Barack Obama and his Republican presidential opponent, former Massachusetts Gov. Mitt Romney, were clear.

Speeches in prime time on successive nights touted the president's support for keeping abortion legal, and videos praised his stands on “reproductive choice” and “women's rights.”

The speakers included Nancy Keenan, president of NARAL Pro-Choice America; Cecile Richards, president of the Planned Parenthood Federation of America; and Sandra Fluke, a Georgetown Law School graduate who has spoken out against religious exemptions to the Department of Health and Human Services' contraceptive mandate.

At the Republican National Convention in Tampa, Fla., there were few speeches that touched on abortion, but candidate Romney pledged in his acceptance speech to “protect the sanctity of life” and the GOP platform states that “the unborn child has a fundamental individual right to life which cannot be infringed.”

“We support a human life amendment to the Constitution and endorse legislation to make clear that the Fourteenth Amendment's protections apply to unborn children,” the platform adds. “We oppose using public revenues to promote or perform abortion or fund organizations which perform or advocate it and will not fund or subsidize health care which includes abortion coverage.”

The Democratic Party's platform approved in Charlotte says the party “strongly and unequivocally supports Roe v. Wade and a woman's right to make decisions regarding her pregnancy, including a safe and legal abortion, regardless of ability to pay. We oppose any and all efforts to weaken or undermine that right.”

In recent years, there has been much debate about whether Catholics can legitimately support a candidate who does not oppose abortion, if the candidate's positions on other issues are in line with church teaching.

In a document prepared for the 2012 elections, the Catholic bishops of Kansas answered that question with a decisive no.

“These matters are not negotiable, for they contradict the natural law, available to everyone through human reasoning, and they violate unchanging and unchangeable Catholic moral principles,” they added.

As a matter of fact, the Kansas bishops said, those issues should not be seen, strictly speaking, as political issues.

“Instead, they are fundamentally moral questions involving core Catholic teachings on what is right and what is wrong,” they said. “Catholics who depart from church teaching on these issues separate themselves from full communion with the church.”

On the issue of assisted suicide, neither candidate has taken a clear stand, although the Republican platform states: “We oppose the nonconsensual withholding or withdrawal of care or treatment, including food and water, from people with disabilities, including newborns, as well as the elderly and infirm, just as we oppose active and passive euthanasia and assisted suicide.”

The Democratic Party's platform makes no mention of the issue.

In response to a question about assisted suicide in 2008, Obama said he was “mindful of the legitimate interests of states to prevent a slide from palliative treatments into euthanasia” but thought that “the people of Oregon did a service for the country in recognizing that as the population gets older we've got to think about issues of end-of-life care.”

Assisted suicide has been legal in Oregon since voters approved it in 1994. It also is legal in Washington state and in Montana.

As president, Obama revoked President George W. Bush's policy on embryonic stem-cell research, which limited such research to cell lines derived from embryos before August 2001. He allowed the National Institutes of Health to expand the acceptable lines to any embryos created for in vitro fertilization purposes and later discarded, if the couple agreed to such research.

Romney's campaign site calls stem-cell research “a great scientific frontier,” but says it “must be pursued with respect and care.”

“When confronted with the issue of stem-cell research as governor of Massachusetts, Mitt Romney chose to support life by vetoing a bill that would have allowed the cloning of human embryos,” it added. “Quite simply, America cannot condone or participate in the creation of human life when the sole purpose of its creation is its sure destruction.”

The campaign site expresses support for adult stem-cell research and “alternative methods to derive pluripotent stem cells, such as altered nuclear transfer and direct reprogramming” and says Romney as president “will focus his energy on laws and policies that promote this kind of research to unlock the medical breakthroughs that our loved ones so desperately need.”

On the issue of the death penalty, the Democratic platform says it “must not be arbitrary.”

“DNA testing should be used in all appropriate circumstances, defendants should have effective assistance of counsel, and the administration of justice should be fair and impartial,” it adds.

The Republican Party's platform says, “Courts should have the option of imposing the death penalty in capital murder cases.”

“Our national experience over the last several decades has shown that citizen vigilance, tough but fair prosecutors, meaningful sentences, protection of victims' rights, and limits on judicial discretion can preserve public safety by keeping criminals off the streets,” it adds.

The U.S. Catholic bishops, in their document “Forming Consciences for Faithful Citizenship,” say “our nation's continued reliance on the death penalty cannot be justified.”

PREVIOUS: Religious freedom at home and abroad an election-year issue for many