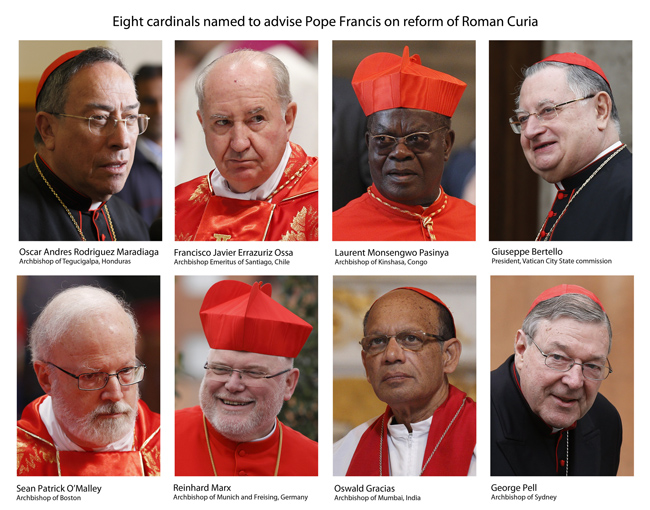 VATICAN CITY (CNS) — The eight cardinals named by Pope Francis to begin work on ways to reorganize the Roman Curia are predominantly active archbishops of very large archdioceses, but they also have a wide range of pastoral and organizational experiences and skills.

The Vatican announced the members of the group April 13. The eight are:

— Italian Cardinal Giuseppe Bertello, 70, head of the commission governing Vatican City State and the only Vatican official in the group. A longtime member of the Vatican diplomatic service, he has been based at the Vatican only since 2011. His diplomatic postings have included Sudan, Turkey, Venezuela, Rwanda — immediately before and during the genocide — and he served as the Vatican observer to U.N. agencies based in Geneva, as nuncio to Mexico and then to Italy.

Ordained to the priesthood in 1966 for the Diocese of Ivrea in northern Italy, he comes from the same region as Cardinal Tarcisio Bertone, Vatican secretary of state, and is seen as a close friend of the cardinal.

The governor’s office, which Cardinal Bertello had just taken over, was a key target in the 2012 “VatiLeaks” scandal, which saw the publication of confidential Vatican documents; the correspondence included several pieces that alleged corruption inside the Vatican, particularly in the rewarding of contracts for work in Vatican City State. In addition to dealing with the fallout from that scandal, Cardinal Bertello has been involved in the drafting and implementation of new Vatican City finance laws designed to increase transparency and update Vatican laws in line with international agreements to prevent money laundering and the financing of terrorism.

— Boston Cardinal Sean P. O’Malley, 68, speaks Spanish fluently and is known for striving for transparency, tackling reform and making tough, sometimes unpopular, choices all while strengthening the church’s mission of service and evangelization.

When the Capuchin Franciscan first addressed the scandal-hit Archdiocese of Boston, he invoked “those words that inspired St. Francis, when the crucified Lord said to him, ‘Francis, repair my church.’ I ask you and plead with you: Repair my church.”

Arriving in Boston in 2003, he tackled the financial and administrative disarray in the archdiocese that had been the epicenter of the national clergy sex abuse scandal. He confronted the loss of confidence in its church leadership and sharp declines in revenue by making sometimes controversial decisions. He sold off 43 acres of archdiocesan property, including the large mansion known as the cardinal’s residence, and ordered the closure of 63 of the archdiocese’s 357 parishes based on a study of what parishes were viable and which ones must be closed or merged. His reorganization also involved eliminating jobs, consolidating or merging programs, selling more property and making efforts to increase fundraising.

— Sydney Cardinal George Pell, 71, has a reputation as a plain-spoken, no-nonsense bishop. When his appointment to the group was announced April 13, he told the newspaper The Australian he already has ideas for possible changes. “Professional men and women with expertise in areas such as finance, for example, could have a lot to offer in overseeing some Vatican departments, perhaps under the leadership of a cardinal,” he said.

The cardinal already has been a member of the international Council of Cardinals for the Study of the Organizational and Economic Problems of the Holy See, which reviews the Vatican’s annual budget forecasts and reports.

— Indian Cardinal Oswald Gracias of Mumbai, 68, brings to Pope Francis’ group of cardinals his perspective not only as leader of an archdiocese with more than 500,000 faithful, but also as president of the Federation of Asian Bishops’ Conferences, to which 19 bishops’ conferences belong as full members and another nine belong as associate members.

Speaking to the AsiaNews agency after his appointment, Cardinal Gracias said Pope Francis wanted to ensure that the universal church was presented in the group “to know and understand the sentiments of the people with direct contact with the grass roots from all corners of the globe.”

— Honduran Cardinal Oscar Rodriguez Maradiaga of Tegucigalpa, 70, does not work in the Roman Curia, but his responsibilities and experience as president of Caritas Internationalis — the umbrella organization of national Catholic charities around the world — have brought him into regular contact with the curia and have involved him directly in questions of the roles and responsibilities of various curial offices. In May 2012 the Vatican published a decree giving the Vatican Secretariat of State and the Pontifical Council Cor Unum, which promotes Catholic charitable giving, more direct control over Caritas Internationalis, particularly to support its Catholic identity.

The cardinal’s fight against poverty has been waged on several levels: battling for better education for the poor, criticizing corruption in Honduras and throughout the region, and leading the crusade for the alleviation of the heavy foreign debt of the world’s poorest nations. He also served as head of the Latin American bishops’ council, CELAM, in the 1990s.

— Cardinal Laurent Monsengwo Pasinya of Kinshasa, Congo, 73, preached Pope Benedict XVI’s 2012 Lenten retreat on “communion in the church, both the communion of the faithful with the apostles and of the faithful and the apostles with God.” He told Vatican Radio at the time that the First Letter of St. John speaks “of all the problems the early church encountered and that we can encounter,” issues and attitudes that break communion, the cardinal said. All of the problems boil down either to a lack of faith or a lack of love, he said.

The cardinal also has had direct experience in governing and mediating in a very, very difficult situation. With the Vatican’s blessing, in the 1990s he took an active role in mediating his country’s political crisis and trying to guide the nation to a new democratic constitution. In 1991, he was elected president of the Sovereign National Conference; from 1992 to 1994, he served as president of the High Council of the Republic; and in 1994-1995, he served as speaker of the country’s transitional parliament.

— German Cardinal Reinhard Marx of Munich and Freising, 59, is an expert on Catholic social teaching and speaks often about the importance of reforming economic systems to respect the human person, solidarity and the rule of law.

He praised Pope Benedict’s encyclical “Caritas in Veritate” (“Charity in Truth”) as a guideline for ethical principles that should be put into action. “We cannot build solidarity without the idea that everyone is in this communion,” he said in a talk he gave at the University of Notre Dame in Indiana in 2010.

Cardinal Marx is author of “Das Kapital: A Plea for Man,” a book that incorporates the title of the 1867 book written by Karl Marx. But the cardinal’s book discusses the value of Catholic social teaching in a globalized world and the importance of learning from current economic woes to avoid further financial crises. He wrote that institutional and political bodies must work together to create solidarity and global responsibility, and that a good life depends on a good state that is democratic and ethical.

The cardinal has served as head of the Committee for Social Issues for the German bishops’ conference, president of the Commission of the Bishops’ Conferences of the European Community and head of the Bavarian bishops’ conference. The editor of the weekly newspaper of the Archdiocese of Munich and Freising, Johannes Schiessel, told Catholic News Service in 2008 that the cardinal is “a modern man who wants to get things done and is determined to have the church talk more about social and global justice.”

— Cardinal Francisco Javier Errazuriz Ossa, the 79-year-old retired archbishop of Santiago, Chile, earned the reputation as a reconciler when he promoted truth and forgiveness in a nation divided and shocked by revelations of human rights atrocities waged during Gen. Augusto Pinochet’s military regime.

He convinced the nation’s bishops in 2000 to allow Chilean priests to become available to listen to anyone having information regarding the fate of people who disappeared during the period of military rule from 1973-1990. The initiative resulted in many people providing key information and the cardinal said at the time that “our task as pastors is not to encourage revenge and hate, but the ways that will bring a closure in national reconciliation, which requires justice and forgiveness.”

He was superior general of the secular Schonstatt Fathers and served at the Vatican as secretary of the Congregation for Institutes of Consecrated Life and Societies of Apostolic Life from 1990 to 1996.

While at the Vatican office, he dealt with the conflict between CELAM and the Latin American Conference of Religious, known as CLAR, which several bishops regarded as too heavily influenced by liberation theology.

He called on CLAR to make deep reforms in its most controversial programs, but rejected pressures to disband it and create another organization.

NEXT: Best defense against sin, temptation is Jesus, pope says at audience