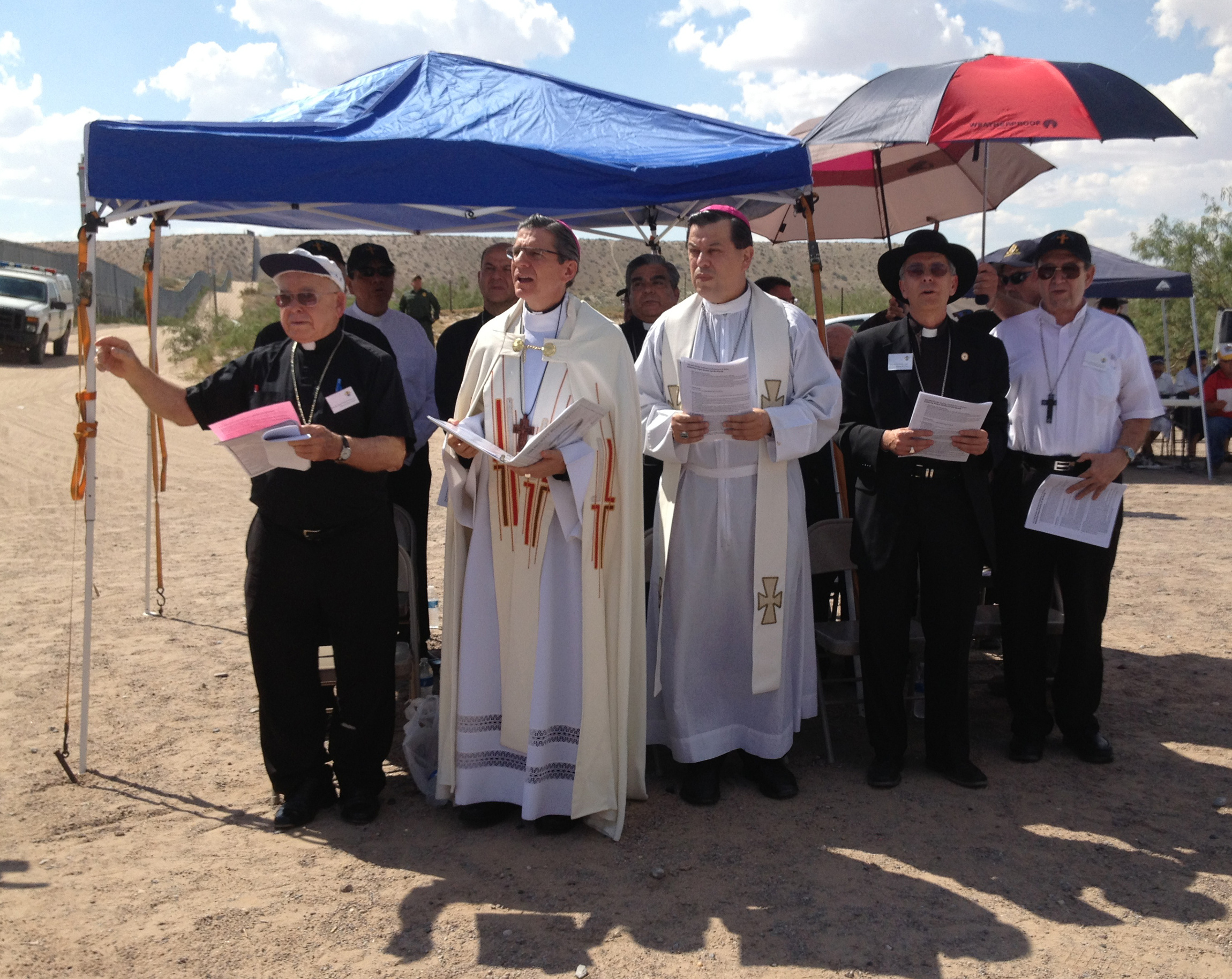 Archbishop Gustavo Garcia-Siller of San Antonio, center left, is seen celebrating Mass with other clergymen in late September for undocumented immigrants held at the South Texas Detention Center in Pearsall, Texas. In a newly released pastoral letter, "Family Beyond Borders," the bishops of the border region of Texas, Mexico, and New Mexico humanize the immigration debate by placing it in a moral context with specific examples of struggling children and families. (CNS photo/Jordan McMorrough, Today's Catholic)

SAN ANTONIO (CNS) — In a new pastoral letter “Family Beyond Borders,” the bishops of the border region of Texas, New Mexico and Mexico humanize the immigration debate by placing it in a moral context with specific illustrations of struggling children and families.

It addresses the misconceptions concerning undocumented immigrants and their contribution to society in the United States, while outlining the serious threats facing immigrant families and tragic conditions under which children have been separated from their mothers and fathers.

Archbishop Gustavo Garcia-Siller of San Antonio held a news conference Nov. 26 in which he joined with his brother bishops in urging Catholics, national, state and local leaders, and all people of good will to engage in dialogue, advocacy and action to protect the human rights of immigrants and to help keep their families together.

Archbishop Garcia-Siller began his comments by saying the bishops of the border region have published and are distributing “Family Beyond Borders” with a sense of urgency.

Dated for Thanksgiving, Nov. 28, “Families without Borders” was made available on the Archdiocese of San Antonio website at www.archsa.org, and was being printed in English and Spanish in the Nov. 29 issue of Today’s Catholic, the archdiocesan newspaper.

It also was being distributed to President Barack Obama, U.S. senators and representatives from Texas, and a number of civic and faith leaders.

“We believe it is imperative that the people of the United States see that the broken immigration system of this land comes with tragic human cost,” he explained. “Families are torn apart, children are separated from their mothers and fathers, husbands are divided from wives, not just for days or weeks, or even months. Many may never see their families for decades, if ever.”

The San Antonio prelate said the border bishops acknowledge the right and responsibility of a nation to secure its borders.

“But at what price?” he questioned. “Immigration reform has evolved from an honest discussion about national security, to a partisan politics issue, thus blinding some Americans from seeing immigrants as suffering people who live among us, on our streets and in our neighborhoods.

“The fear that comes from misinformation denies their dignity and the positive contribution the undocumented immigrants make to our lives every day.”

The archbishop spoke emotionally about undocumented immigrant children — some as young as 5 years old — who brave the dangers of the desert and coyotes and hide from authorities as well as human traffickers in an attempt to reach the safety of a new home of hope.

In “Family Beyond Borders,” he said, “we attempt to help our people see these children who cry in the darkness of isolation and often abuse.”

Archbishop Garcia-Siller stated that in fiscal year 2012, the U.S. Border Patrol reported apprehensions of more than 24,000 unaccompanied juveniles along the Southwest border.

“These children who are apprehended are often initially placed in short-term detention centers, where the lights stay on 24 hours a day and there are no showers or recreation spaces. At times, the facilities are so crowded with juveniles that the children have to take turns just to lie down to sleep on the concrete floor,” he said of conditions at some facilities. “Moreover, when unaccompanied minors are apprehended and deported to their countries of origin, this is often done in ways that put them at additional risk.”

The archbishop said that the border bishops believe that if the people of the United Sates understand what immigration policies and laws are doing to punish families and children just because they do not have the right documents, “they will join their voices with ours, their hearts with our brothers and sisters in need, and demand action by our legislators and our president, now.”

Archbishop Garcia-Siller acknowledged that often people will say, “Why don’t they just wait their turn?” but he said, “They truly do not understand how broken the system is.”

He explained that the U.S. State Department issues available visas through a complex system that has limits for various categories of family-sponsored and employment-based preferences and quotas for individual countries. Currently, he said, there is a 17- to 20-year “wait” for Mexicans to acquire a U.S. visa.

“How long can we ask a father to wait to be able to feed his family and offer them a future of hope? Can we in good conscience tell a father and mother that their children’s chance for a better life is out there, but they should wait 20 years to live it? How can you tell a mother that she must wait 20 years to be reunited with her husband or children?” he asked.

“Family Beyond Borders” quotes Pope Francis: “Life, which is a gift of God, a value always to be protected and promoted; the family, the foundation of coexistence and a remedy against social fragmentation.”

In this light, Archbishop Garcia-Siller stressed the border bishops believe that “what is happening to the immigrant family in the United States is an offense against God and the human conscience.”

“We implore our leaders to stop looking at immigration reform as simply a politically charged item of controversy. It should no longer require an act of courage on the part of a legislator to apply the principles of moral ethics, true family values, decency and justice,” the archbishop emphasized.

The bishops who worked on “Families Without Borders” represent: the Mexican dioceses of Chihuahua, Ciudad Juarez, Cuauhtemoc-Madera, Matamoros, Monterrey, Nuevo Casas Grandes, Nuevo Laredo, Piedras Negras and Saltillo; the Diocese of Las Cruces, N.M., and the Texas dioceses of Amarillo, Brownsville, El Paso, Lubbock and San Angelo and the Archdiocese of San Antonio.