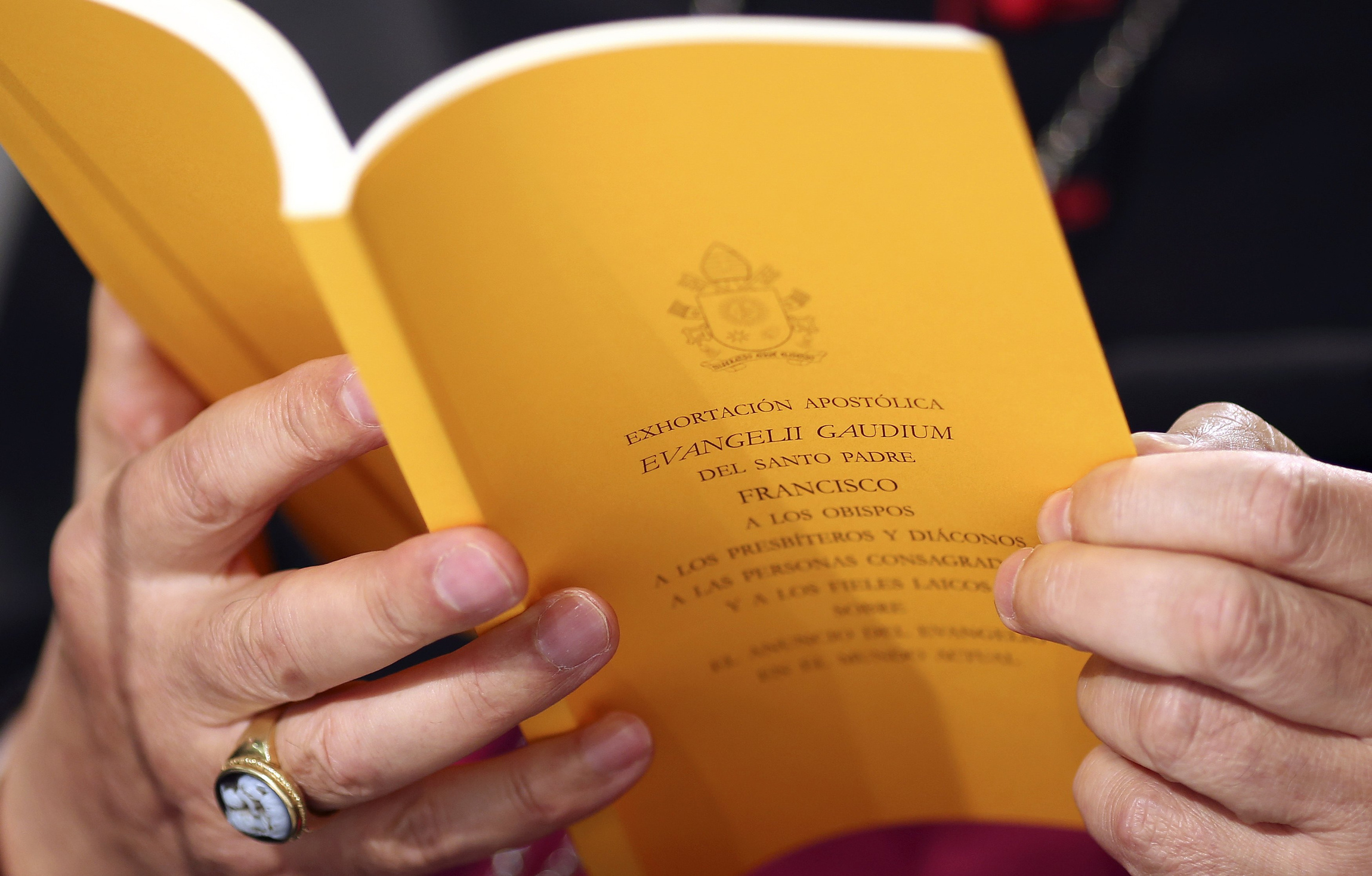 Updated – WASHINGTON (CNS) — Pope Francis’ apostolic exhortation “Evangelii Gaudium” (“The Joy of the Gospel”) has prompted plenty of commentary, and not exclusively from Catholic circles.

“Pope Francis is a living model of the new evangelization,” said Bishop David L. Ricken of Green Bay, Wis., chairman of the U.S. bishops’ Committee on Evangelization and Catechesis.

The pope “is showing us how to live the Gospels and reach out to the world with what every person needs, a relationship with God,” the bishop said in a statement Nov. 26, the same day the exhortation was released. “He is leading the world to deeper faith, and the bishops of the United States happily receive this exhortation with faith and look forward to sharing it in our dioceses.”

“His emphasis on the ongoing divine presence in the life of the Jewish people and on the importance of the ‘values of Judaism’ for Christians, is particularly significant in further advancing the historic transformation in the Catholic Church’s approach toward the Jewish people,” Rabbi Rosen said in a Nov. 26 statement.

Rabbi Rosen, who has met with Pope Francis four times since the pope’s election in March, quoted from “Evangelii Gaudium” in lauding “the pope’s emphasis on the importance of interreligious dialogue to promote peace in the world and as a means to ‘learn to accept others and their differen(ces),’ as powerful encouragement for greater respect and harmony in our world.”

Supreme Knight Carl Anderson called “Evangelii Gaudium” an “important and timely contribution to the cause of the new evangelization.” Anderson was an auditor at last year’s synod.

“It highlights his belief that the Gospel message and loving outreach of the church are for everyone, that the church must go outside itself and welcome those on the margins with love and healing in the spirit of Christ himself,” Anderson said in a Nov. 26 statement. “If this document is embraced by the church throughout the world, it could mark a key moment for a reinvigorated new evangelization of our culture.”

“Evangelii Gaudium” “is pure Pope Francis,” said a Dec. 1 blog posting by Bishop Robert N. Lynch of St. Petersburg, Fla. “It is a challenge to the church from a shepherd who lived and worked in a large urban environment in the new world where everything does not work or look like it might in Europe.”

“The Holy Father has addressed fundamental challenges facing the entire world, especially the poorer nations and challenges the more prosperous to an even higher level of accountability. And what he asks of nations, he also asks of persons,” Bishop Lynch said. “Because Pope Francis is so popular, one can expect fairly severe criticisms directed his way and we should be supportive of him. He knows what the poor look like, what they need and seek.”

“Pope Francis has surprised the world because he embraces the Christian calling to destabilize and to challenge. As the first leader of the Catholic Church from the Southern Hemisphere, he is especially mindful of the ways in which unregulated capitalism has failed the poor and left them ‘waiting,'” said E.J. Dionne in a Dec. 2 article in The Washington Post.

“American liberals and conservatives alike might be discomfited by the pope’s criticism of ‘the individualism of our postmodern and globalized era,’ since each side defends its own favorite forms of individualism,” Dionne added. “Francis mourns ‘a vacuum left by secularist rationalism,’ not a phrase that will sit well with all on the left. And in light of the obsessive shopping on Cyber Monday and Black Friday, here is a pope who paints consumerism in the darkest of hues.”

Noting that Pope Francis’ economic critique is no different from those of Blessed John Paul II or Pope Benedict XVI, Dionne said, “The difference is that a concern for the poor and a condemnation of economic injustice are at the very heart of Francis’s mission.”

Ross Douthat, in a Dec. 1 column in The New York Times, said there were “merits” for Catholic conservatives’ deflections of the economic criticisms issued in “Evangelii Gaudium,” “but they still seem insufficient to the Francis era’s challenge to Catholics on the limited-government, free-market right.”

“This is where Francis’s vision should matter to American Catholics who usually cast ballots for Republican politicians. The pope’s words shouldn’t inspire them to convert en masse to liberalism, or to worry that the throne of Peter has been seized by a Marxist anti-pope,” Douthat wrote. “But they should encourage a much greater integration of Catholic and conservative ideas than we’ve seen since ‘compassionate conservatism’ collapsed, and inspire Catholics to ask more — often much more — of the Republican Party, on a range of policy issues.”

The challenge for conservative Catholics, is to do somewhat better,” Douthat said, “and to spend the Francis era not in opposition but seeking integration — meaning an economic vision that remains conservative, but in the details reminds the world that our Catholic faith comes first.”

“The new pope clearly intends to foreground the church’s social teaching in new ways, and probably seeks roughly the press coverage he’s getting. It’s also true that Francis’s framework is pastoral rather than political. But his plain language tilts leftward in ways that no serious reader can deny,” wrote David Cloutier, associate professor of theology at Mount St. Mary’s University in Emmitsburg, Md., in a Dec. 1 posting on the Catholic Moral Theology blog.

“I would tend to agree that when you remove real economic responsibilities from families, the outcome is not good for families, despite the good intention to protect families — and especially children — from harmful economic outcomes,” Cloutier said.

But, taking note of how some of the worst “social capital” states are in “low-tax, low-service” Southern states, while New England and Upper Midwest states perform much better, Cloutier said, “Catholics probably need to do a better job on both sides of the economic spectrum in understanding how and why ‘intermediate organizations’ flourish or fail.”

He added, “Catholic Democrats and Republicans could actually engage in constructive conversations about fidelity to Pope Francis’ teachings — and perhaps could even move their political parties away from the default extremes.”

“Rush Limbaugh called this week’s letter from Pope Francis ‘pure Marxism.’ He could not be more wrong,” said a Nov. 30 blog posting from Stephen Schneck, director of the Institute for Policy Research & Catholic Studies at The Catholic University of America, Washington.

Instead, Schneck argued on the institute’s website, “What Pope Francis offers in ‘Evangelii Gaudium’ is pure Christianity.”

Schneck said, “The pontiff points to what he describes as fundamental structural causes of poverty that are evidenced in the exponential growth of worldwide income inequality. He discerns radical free market practices as problematic. Naming ideologies that ‘defend the absolute autonomy of the marketplace’ and that reject the duty of governments to exercise any form of control, Pope Francis fears that from such errors a ‘new tyranny’ is born.”

He added, “The pope invites us to come out of our private sanctuaries and to take up anew a Christ-like mission in the world.”

A Dec. 2 editorial posted on the website of Commonweal magazine called “Evangelii Gaudium” “a 47,500-word pep talk. It is sometimes severe and demanding, sometimes consolatory, but all of it is intended to motivate.”

Whereas Pope Benedict “foresaw the possibility that the church might grow smaller; and, while he did not greet this prospect eagerly, he did speculate that a smaller church might turn out to be a purer one,” the editorial said, “Francis generally seems less concerned with moral relativism outside the church than with worldliness within it. He rejects the notion that the church is an exclusive club for the preservation of moral purity and traditional piety, and wants the church to be open to as many people as possible.”

Pope Francis’ criticism of “unregulated capitalism,” Commonweal said, “has at least made it difficult for his judgments to be misrepresented by those who would rescue the church from social teachings they find embarrassing or inconvenient. Francis brushes aside the shibboleths that are supposed to justify the economic policies of much of the developed world.”

Bishop James D. Conley of Lincoln, Neb., in a Dec. 2 a blog post in the National Review online, called the exhortation “demanding” and said it must be read “honestly.” “The Holy Father unmasks the false rigidity, the relativism, the consumerism and the complacency that hampers Christian life. … Only a pastor and a very good one could have written such a thing.”

“The personal and convicting message of Pope Francis requires us to examine carefully the humanity of our public policy, and of our private lives. … It calls us to temper the pursuit of our own prosperity by our obligations to our fellow human beings,” the bishop wrote.

He, too, referred to the charge Pope Francis’ message is “pure Marxism,” saying that by such criticism the pope “is reduced to a cartoonish socialist to quiet consciences rankled by (the) exhortation.”

“The invitation of ‘Evangelii Gaudium’ is challenging and discomforting, he said, and however one choses to respond to it the “invitation to virtue solidarity and sanctity will remain an invitation to a Gospel of pure joy,” Bishop Conley added.

NEXT: Current state of U.S. immigration ‘an offense against God,’ say bishops