HONOLULU (CNS) — Father Jan Michael Joncas has composed more than 300 liturgical songs, but his name is widely known for the one that tops a list of favorites: “On Eagle’s Wings.”

The hymn by Father Joncas, 62, a priest of the Archdiocese of St. Paul and Minneapolis, was named by hundreds of voters as their No. 1 liturgical hymn in a 2006 poll sponsored by the National Association of Pastoral Musicians.

Since “On Eagle’s Wings” was written in 1979, it has become a staple at Sunday Masses, funerals and memorial events as a reminder of God’s uplifting presence in times of sorrow.

“Most people associate me with this single piece,” Father Joncas told the Hawaii Catholic Herald via email.

Father Joncas said the song came about when he was visiting a friend at the major seminary in Washington. One evening, Father Joncas’ friend got word that his father had suffered a fatal heart attack. Father Joncas wrote “On Eagle’s Wings” in the days that followed and it was was sung for the first time publicly at the friend’s father’s wake service.

The song is based on Psalm 91, its lyrics drawing from the Scripture’s descriptions of God’s protection and providence. Lyrics include the lines “You need not fear the terror of the night, nor the arrow that flies by day,” and “For to his angels he has given a command to guard you in all of your ways.”

Although there are no mentions of eagles in Psalm 91, the song’s chorus uses the metaphor to depict God’s high, secure places the verse describes. “And he will raise you up on eagle’s wings, bear you on the breath of dawn, make you to shine like the sun, and hold you in the palm of his hand.” 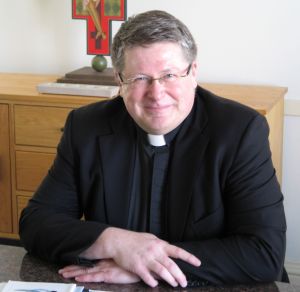 “I have been humbled by the number of times people have spoken or written to me about how God has used the song to bring them comfort and peace,” Father Joncas said.

The song’s colorful imagery is woven together by a melody with airy highs and a crescendo refrain. Father Joncas said the verses were meant to be sung by a cantor capable of handling the wide range of notes. Congregants would join in singing the simpler chorus.

“I have been amazed to find congregations singing the entire thing, because I think the verses are somewhat difficult,” said Father Joncas, who, with fellow composer Marty Haugen, participated in a liturgical arts conference in Honolulu in the fall.

The priest has been composing new material recently, after his recovery from Guillain-Barre syndrome. The illness paralyzed him in 2003, but he has recuperated well.

Haugen, 63, wrote “Shepherd Me, O God” in the mid-1980s. It is cherished by many Catholics for its treatment of Psalm 23, which begins, “The Lord is my shepherd, I shall not want.”

Speaking by phone from his home in Minnesota, he explained that depicting “shepherd” as an action instead of a noun brought forth the now famous song.

“I have never met a shepherd,” Haugen said. “My wife was finally the one who suggested … make it a verb. That sort of was a breakthrough.”

Haugen, who is not Catholic but has worked in Catholic parishes, was living at an ecumenical retreat center in Washington State with his family when he was commissioned to do a version of Psalm 23. Haugen said he knew it would be a challenge.

“It’s hard to write something that everybody knows the text to,” he said.

The retreat center community held vespers every night. Haugen said they would regularly integrate his new music into prayer time. That winter, with little else to do on snowed-in evenings, the community helped critique his work. “Shepherd Me, O God,” Haugen joked, is the one of several versions he wrote that received the least amount of criticism.

“That piece, like everything I wrote up there, went through the grill of the community,” he said. “I think that’s really valuable.”

“You don’t really know if a piece is going to be helpful or not until a congregation has sung it a number of times and they’ll tell you,” he added.

“Shepherd Me, O God” stays close to the words of the psalm, with verses such as “Surely your kindness and mercy follow me all the days of my life; I will dwell in the house of my God forevermore.” Haugen’s tight lyrical adherence to Scripture comes from a pastoral studies degree he earned at the University of St. Thomas in Minnesota.

“If you’re writing liturgical music, your two main sources are the rite and the Scripture,” he said. “The more you can know about both, the more you feel you have something to offer when you start to write.”

In a song such as “Shepherd Me, O God,” where the words are already familiar to many, Haugen said “the melody is at the service of the text.”

“You want people to remember the music because if they remember it, then they’re remembering the words,” he said.

Dela Cruz is a staff writer at the Hawaii Catholic Herald, newspaper of the Honolulu Diocese.