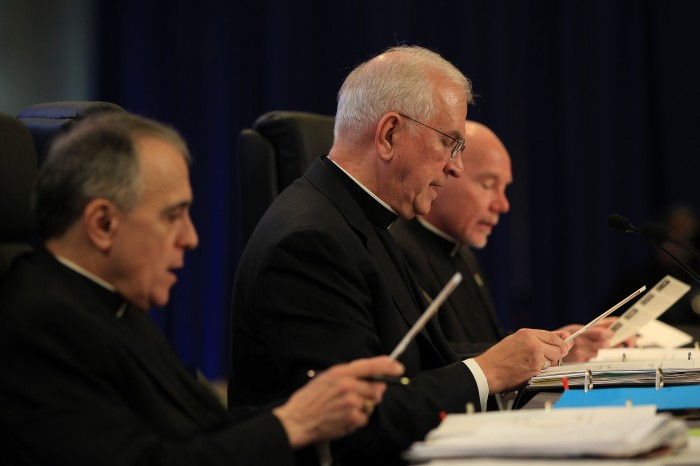 At the close of the morning’s session June 11, the bishops were advised to pay close attention to the Vatican’s extraordinary Synod of Bishops on the family Oct. 5-19 and to promote the World Meeting of Families September 2015 in Philadelphia.

The bishops, by their applause, also showed support for a letter to be sent to Pope Francis, inviting him to the Philadelphia meeting.

Read by Archbishop Joseph E. Kurtz of Louisville, Kentucky, president of the U.S. Conference of Catholic Bishops, the letter said that the pope’s presence would “add significance” to the gathering and “deepen the bonds of affection” many Catholics feel for the Holy Father. 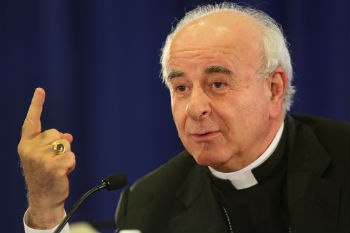 PHILADELPHIA IS NO. 1 — Archbishop Vincenzo Paglia, president of the Pontifical Council for the Family which is sponsoring the World Meeting of Families in Philadelphia next year, invited the U.S. bishops to the gathering. He called it a key factor in promoting family life, which he said is currently in crisis. (CNS photo/Bob Roller)

Archbishop Vincenzo Paglia, president of the Pontifical Council for the Family, described the Philadelphia gathering as a key factor in promoting family life, which he said is currently in crisis.

“The family today is living out a paradox,” he told the bishops. “On the one hand, great value is given to the bonds of family, everywhere in the world,” but today’s families are weakened and often “lose their way.”

The archbishop said he hoped the Philadelphia gathering would provide a “new spring” for families.

“Please believe and preach to your flocks” the importance of families, he added.

Archbishop Kurtz spoke about the upcoming synod on the family, noting that it will take its cue from responses given by responses from surveys of Catholic families worldwide. He said the responses were to remain confidential, but that he could reveal the trends the answers revealed.

They indicate that Catholics were eager to respond to questions about family life, he said, and many expressed a desire to hear a more clear explanation of church teaching about marriage and families.

He also said many parents indicated that they are “at a loss” for how to transmit the faith to their children and that they also face challenges from today’s economy, busy schedules and a culture they have described as being “hostile” to their faith.

Another family issue addressed in the morning session highlighted the bishops’ efforts in support of traditional marriage.

San Francisco Archbishop Salvatore J. Cordileone, chairman of the USCCB’s Subcommittee for the Promotion and Defense of Marriage, noted that the redefinition of marriage is occurring at the state level and the federal level.

The Catholic Church opposes same-sex marriage. Catholic teaching upholds the sanctity of traditional marriage as between one man and one woman. It also teaches that any sexual activity outside of marriage is a sin.

He urged the bishops to move forward in their support of marriage, recalling the words of Pope Francis: “Challenges exist to be overcome! Let us be realists, but without losing our joy, our boldness and our hope-filled commitment.”

He encouraged them to continue to “move forward in confidence with prayer and solidarity with all people, knowing that strengthening marriage and family is vitally important and necessary for the good of all.”