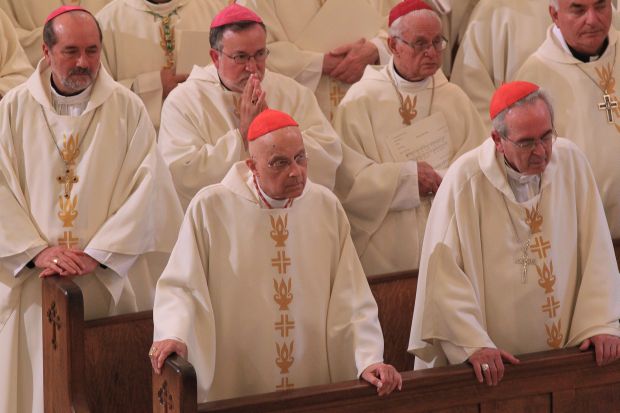 Cardinal Francis E. George of Chicago and Cardinal Justin Rigali, retired archbishop of Philadelphia, are among the bishops concelebrating Mass at St. Louis Cathedral June 11 during the annual spring meeting of the U.S. Conference of Catholic Bishops in New Orleans. (CNS photo/Bob Roller)

NEW ORLEANS (CNS) — During their June 11-13 spring general assembly in New Orleans, the nation’s Catholic bishops voted to extend their Ad Hoc Committee on Religious Liberty and to approve work on a limited revision of their quadrennial document aimed at guiding Catholics in election decisions.

They also were urged to promote and support Catholic families by paying close attention to the upcoming synod on the family at the Vatican and to promote the World Meeting of Families next year in Philadelphia.

The bishops heard about the progress made and the work that still needs to be done on efforts to protect children from sexual abuse. They received a report about their aid to typhoon victims in the Philippines and were advised about the work being done to make sure religious educational materials conform to the Catechism of the Catholic Church.

The public sessions of the meetings took place June 11 and the morning of June 12 before the bishops went into executive session.

“It is always a great joy for us to be together,” Archbishop Carlo Maria Vigano, apostolic nuncio to the United States, told the bishops at the start of their meeting. There is “unity and strength from the Holy Spirit when you gather as one church,” he added.

The nuncio emphasized the need to be in solidarity not only with each other but also with Catholic leaders and the faith community in the Iraqi city of Mosul, where Christians were among the hundreds of thousands of people who began fleeing June 9 after Islamist forces took over much of the city.

“We join with them in solidarity and hope that the international community will not remain insensitive” to the attacks, he said.

Prior to the vote on a three-year extension of the Ad Hoc Committee on Religious Liberty, Baltimore Archbishop William E. Lori, its chairman, compared the body’s work to the “humble beginnings of the pro-life movement.” 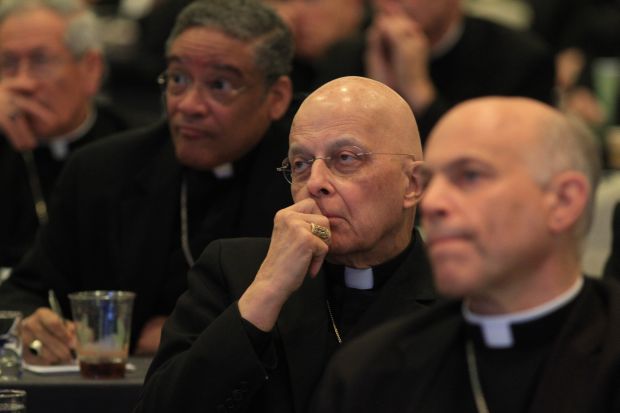 Chicago Cardinal Francis E. George, center, listens to a speaker June 12 during the annual spring meeting of the U .S. Conference of Catholic Bishops in New Orleans. (CNS photo/Bob Roller)

The ad hoc committee was formed in 2011 and the “need for its sustained work is at least as great as when it started,” he told the bishops.

Several bishops said they appreciated the materials the committee provided them and their dioceses and felt the work was important.

Another item the bishops unanimously approved was a limited revision of the 2007 statement “Forming Consciences for Faithful Citizenship” and the draft of a new introductory note for it. The revision and draft will be presented for a vote by the U.S. bishops at their annual fall assembly in November.

The document has been issued before every presidential election for almost four decades.

A note in the current introduction, revised in 2011, clarifies that the document is “does not offer a voters’ guide, scorecard of issues or direction on how to vote,” but instead “applies Catholic moral principles to a range of important issues and warns against misguided appeals to ‘conscience’ to ignore fundamental moral claims, to reduce Catholic moral concerns to one or two matters, or to justify choices simply to advance partisan, ideological or personal interests.”

The bishops also voted to permit the Committee on Clergy, Consecrated Life and Vocations to seek a renewed recognitio, or approval, from the Vatican for the National Directory for the Formation, Ministry and Life of Permanent Deacons in the United States. Vatican approval to the text would be for another five-year term.

The bishops, by applause, showed their support of a letter to be from Archbishop Joseph E. Kurtz of Louisville, Kentucky, president of the U.S. Conference of Catholic Bishops, to Pope Francis, inviting him to attend the World Meeting of Families next September in Philadelphia.

Read at the meeting by Archbishop Kurtz, the letter said the pope’s presence would “add significance” to the gathering and “deepen the bonds of affection” many Catholics feel for the Holy Father.

Archbishop Vincenzo Paglia, president of the Pontifical Council for the Family, said the Philadelphia gathering was a key factor in promoting family life, which he said is currently in crisis.

“The family today is living out a paradox,” he told the bishops. “On the one hand, great value is given to the bonds of family, everywhere in the world” but he also noted that today’s families are weakened and often “lose their way.”

Philadelphia Archbishop Charles J. Chaput told the U.S. bishops the 2015 gathering “comes at a time when the church in the United States urgently needs an opportunity for joy and renewal. It’s also a time of great confusion about the nature of marriage and the family.”

“Our goal is to exclude no one from the excitement of this meeting. Our goal is to offer the beauty of Catholic teaching about marriage and the family with confidence and a spirit of invitation to every person of good will,” he said. “That’s the heart of our theme: ‘Love is our mission; the family fully alive.'” 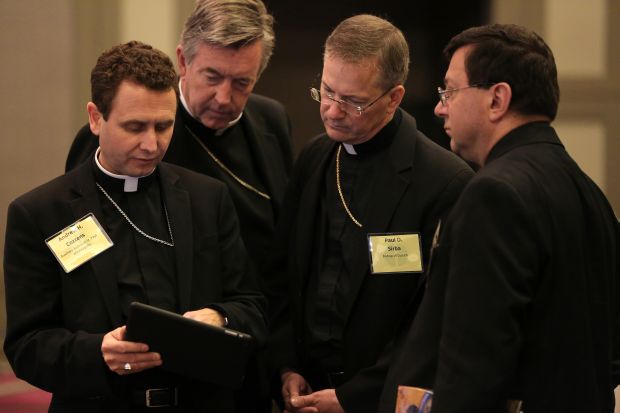 Auxiliary Bishop Andrew H. Cozzens of St. Paul and Minneapolis, Bishop Paul D. Sirba of Duluth, Minn., center, and other bishops read from an iPad June 11 during the annual spring meeting of the U .S. Conference of Catholic Bishops in New Orleans. (CNS photo/Bob Roller)

Archbishop Kurtz spoke about the upcoming extraordinary synod on the family at the Vatican, noting that it will take its cue from responses given in surveys of Catholic families worldwide. He said while the responses remain confidential, one trend they indicate is Catholics’ eagerness to respond to questions about family life; many have expressed a desire to hear more clear explanation of church teaching about marriage and families.

He also said many parents indicated that they are “at a loss” for how to transmit the faith to their children and they also face challenges from today’s economy, busy schedules and from living in a culture that they’ve described as being “hostile” to their faith.

In his presentation June 11, San Francisco Archbishop Salvatore J. Cordileone, chairman of the USCCB’s Subcommittee for the Promotion and Defense of Marriage, noted that the redefinition of marriage is not only occurring at the state level but federally.

He urged the bishops to move forward recalling the words of Pope Francis: “Challenges exist to be overcome! Let us be realists, but without losing our joy, our boldness and our hope-filled commitment.”

A report by the bishops’ national advisory council called the bishops effort to defend marriage “an urgent priority.”

The report emphasized an agreement with issues on the bishops’ agenda for the spring meeting and also urged the bishops to develop materials to help dioceses address “how it cares for those in pain” and alienated from the church.

The group asked the bishops to continue to review the federal government’s Common Core State Standards initiative and to consider more diocesan programs to help men to get more involved in the church.

A report by the National Review Board, which monitors dioceses’ performance in dealing with sexually abusive priests and creating a safe environment for children, said progress has been made but much work still needs to be done.

In a report on the work of the Subcommittee on the Catechism, Archbishop Leonard P. Blair of Hartford, Connecticut, and chairman of the Committee on Evangelization and Catechesis, noted how the bishops’ subcommittee reviews 25,000 pages of religious education materials a year to determine if they conform with the catechism.

He said that just as the bishops developed high school catechetical materials they should now focus similar efforts on a curriculum format for primary grades.

The bishops were also told how the $21 million in aid relief from U.S. Catholics to Catholic Relief Service helped with immediate and long-term aid and reconstruction of churches in the Philippines after last year’s Typhoon Haiyan.

At the opening Mass June 11 at St. Louis Cathedral, Archbishop Kurtz urged his fellow bishops to encourage Catholics, society at large and each other. He also thanked New Orleans Archbishop Gregory M. Aymond for the “truly warm New Orleans welcome.”

On June 12, the bishops heard from Helen Alvare, law professor at George Mason University Law School in Arlington, Virginia, who spoke about the link between new evangelization and poverty; and Brad Wilcox, associate professor of sociology and director of the National Marriage Project at the University of Virginia, spoke about marriage and the economy.

Alvare urged bishops to continually bring Jesus to those they minister to and to act as he did, making time for people and having personal interaction with them.

Wilcox, citing numerous studies, spoke of the erosion of marriage in society and its negative impact on children. He urged the bishops to articulate with Catholics the benefits of an “intact marriage” but also to “stand in solidarity with couples in crisis.”

NEXT: Speakers urge bishops to continue mission to families, those in need