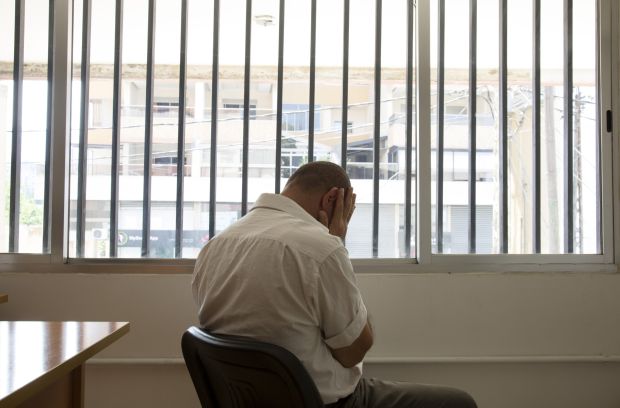 Emil, a Catholic Iraqi refugee, hides his face during a posed photo at the Caritas Lebanon Migrant Center in Beirut Aug. 8. The resident of Mosul, Iraq, fled his hometown with family members after receiving threats from Islamic State militants. (CNS photo/Dalia Khamissy)

BEIRUT (CNS) — The memory of that brutal June evening in his home near Mosul, Iraq, brought 48-year-old Joseph, now a refugee in Lebanon, to tears.

“These people know no limits of humanity, decency, or respect for human life,” he said of the Islamic State fighters.

Meeting with Catholic News Service Aug. 8 at the Caritas Lebanon Migrant Center in Beirut, he and other Catholic Iraqi refugees asked that their real names not be used to protect their identities as they shared the traumatic experiences that led to their exodus.

Joseph recalled how his wife and their teenage son, Bachar, were in their living room. Two other children were asleep around 10 p.m. when there was an explosion-like crash. In an instant, four militants barged into the house, guns aimed at the heads of father and son.

“Give us your gold and valuables,” he said they demanded.

Filled with fear, Joseph’s wife tried to calmly gather all jewelry she had. One of the militants, noticing Bachar’s cross, ripped off the chain in a rage and started to beat the boy, accusing the family of withholding their gold.

“What’s for sure is they (the terrorists) are not all Iraqis. The ones with the beards are not Iraqis,” Joseph said.

After ransacking the home for other valuables, the terrorists warned they would return in 48 hours. Their ultimatum: The family must convert to Islam, pay the Islamic jizya tax, or be killed.

Joseph knew he had no choice but to flee quickly with his family.

“We were happy, our life was good,” he said, collapsing into sobs.

“All the work of my father and myself and my brothers, all the years … gone in just a few seconds,” he said of the trading company he had to abandon. The next morning, “I went to the cemetery and said good-bye to my father, and I went to Mass in my church to receive the Eucharist. I think it was the last Mass celebrated in my village. And I thought, if I’m meant to die at this time, at least I’m in God’s house.”

The family fled to Irbil the night after the attack, eventually boarding a flight to Beirut.

The militants told Joseph’s neighbors — an 85-year-old woman, partially paralyzed by a stroke, and her 60-year-old daughter — they had six hours to leave their home. The women had no choice but to leave on foot, with the daughter assisting her disabled mother along the road, Joseph said. He added he hoped they were able to get a ride from the convoys of vans and pick-up trucks filled with other Christians fleeing their homes.

Through a relative, Joseph found a furnished apartment in Beirut, but rent is $850, so he is searching for cheaper accommodations, knowing that his savings will quickly run out.

Jobs in tiny, economically strapped Lebanon are hard to find. New refugees have to compete with other refugees for work. Currently more than 1.5 million Syrian refugees — equal to at least one-quarter of Lebanon’s resident population — are living in Lebanon.

Even before the Islamist militant onslaught in Mosul and Iraq’s Ninevah province beginning in June, there were already some 9,000 Iraqi refugees in Lebanon, most of whom fled their homeland after the 2003 U.S.-led invasion.

“I am jumpy and nervous,” Joseph told CNS. “What happened is not easy. My children ask me, ‘What will we do? (Islamic State) made us leave Iraq, and now (it) is in Lebanon,” he said, referring to the incursion Aug. 2 by the Islamic militants into a Lebanese town 55 miles northeast of Beirut. “They are afraid.”

Rachid, also from a village near Mosul, told CNS: “All the village has gone. There’s absolutely no one left, no one at all.” The 49-year-old Chaldean Catholic father of six collapsed into tears.

After regaining his composure, Rachid recounted how he was taking his wife to her regular physical therapy appointment in Mosul June 10 when he was forced to stop at an Islamic State checkpoint. The heavily armed militants demanded to see his identity card and asked him if he was Christian.

“Yes I am,” he told them, as Iraqi ID cards indicate the sectarian identity of the cardholder.

“I thought I would be executed on the spot,” Rachid said. The militants refused him entry into Mosul, despite his pleas that his wife needed to see a doctor. They told him all Christians should convert to Islam, pay the jizya tax or be killed.

The next day, Rachid was able to sell some of the inventory from his grocery store to scrape up just enough money to flee. “I locked the doors of my shop and my house for the last time, and we left.”

“There is no future for Christians in Iraq anymore. I left everything for my religion, so I have to trust in the Lord that he will take care of us,” he said.

Before the Islamic State attacks in June, 35,000 Christians lived in Mosul, Iraq’s second-largest city, and more than 60,000 lived there before the U.S.-led invasion in 2003, according to the Chaldean Catholic Patriarchate.

Emil, 40, came to Lebanon with his father, a widower with a heart condition, and his wheelchair-bound physically disabled adult sister, both of whom he supports.

He said that on June 16, four militants broke down the door of their Mosul home and told him he had five days to pay them about $20,000.

“We know where you live, what you do, everything about you, we will find you and kill you,” he said they told him.

So Emil gathered all the family’s legal papers, the few pieces of his late mother’s jewelry — including her crucifix and Marian medal — and fled with his father and sister in the night toward Irbil, leaving behind his home and his sanitation supply shop filled with inventory.

“I want to remain a Christian,” Emil said. “Our religion is about peace, not killing.”

Rent for the apartment he found in a run-down section of Beirut is $500 a month, not including utilities. Lebanon is expensive, he said, and his savings are nearly depleted.

“I look every day for a job, but I don’t know how much longer I can survive,” said the neatly dressed man, the tips of his worn black shoes tattered and peeling away.